B.C. must implement all six recommendations from the First Nations Forest Strategy to bring the industry in line with the UN Declaration on the Rights of Indigenous Peoples, speakers at a virtual conference said Thursday.

“The government is not living up to their commitments to First Nations,” said Charlene Higgins, CEO of the BC First Nations Forestry Council.

Higgins was the moderator of BC First Nations Forestry Conference panel discussing forest strategy and the United Nations Declaration on the Rights of Indigenous Peoples. The panel included representatives from the BC Assembly of First Nations, Union of BC Indian Chiefs and First Nations Summit.

Higgins said the forest strategy has six priority goals that set out a path forward with First Nations as full partners, including shared decision-making and a “meaningful” share of forest revenues derived from Indigenous territories.

“The forest strategy should be used to guide and inform the modernization of forest policy in B.C., based on the six goals of the strategy,” she said.

The strategy outlines six goals to address reconciliation in a way that’s consistent with B.C.’s Declaration on the Rights of Indigenous Peoples Act and sets out a path to an increased role for First Nations in the stewardship of forest resources.

Higgins spoke with The Tyee during last fall’s election campaign about the province’s failure to implement the First Nations Forest Strategy.

At the time, the BC NDP told The Tyee that it was “confident those discussions will continue” around implementing the strategy.

“To this date, we don’t have a positive situation with British Columbia supporting this strategy,” said Regional Chief Terry Teegee with the BC Assembly of First Nations. “First Nations Leadership Council continues to press Premier Horgan and [Minister of Forests Katrine] Conroy to support the First Nations Forest Strategy.”

The current limited timber supply, reopening of B.C. following the pandemic and calls for change to the industry all provide an opportunity to incorporate First Nations into decision-making and revenue-sharing with the province’s forest industry, the leaders said.

The discussion comes a day after the Senate approved Bill C-15, which commits Canada to ensuring its laws are consistent with the United Nations Declaration on the Rights of Indigenous Peoples. Conservative MPs voted against the bill, arguing it would give too much power to Indigenous nations over natural resource projects.

B.C. passed its own similar legislation, the Declaration on the Rights of Indigenous Peoples Act, in November 2019.

Each of the goals outlined in the forest strategy have a direct link to the act, said Kukpi7 (Chief) Judy Wilson of the Union of BC Indian Chiefs, who called the First Nations Forest Strategy “an important document” to guide needed changes in B.C.’s forest management.

“We need B.C. to formally support the joint strategy, which has been supported by the chiefs through resolutions through our respective organizations,” she said. “These must be all aligned with the UN Declaration, including the need for First Nations to provide their free, prior, informed consent regarding any activities or management in their respective territories.”

Wilson outlined challenges over the past 20 years, such as the pine beetle epidemic and wildfires, which have resulted in what she described as a “mad dash” to remove remaining timber resources.

“Why do First Nations have to set up blockades to protect their forests?” she said, referring to ongoing protests against old-growth logging on Vancouver Island.

She said old-growth forests play an integral ecological role in forest health and biodiversity and have “incalculable cultural value and significance” for First Nations who use ancient trees for personal and ceremonial purposes.

“If the province is truly going to take action, as Horgan said, a transformative step in forestry and respecting the nations’ land management rights for old growth must be supported consistently and evenly,” Wilson said. 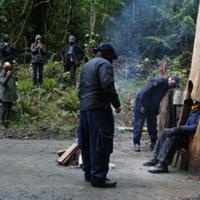 He added that the current status quo in B.C. is unacceptable.

“We’ve been after revenue-sharing and tenure for so long,” he said. “First Nations are decision-makers, we are the rights and title holders, and we do have the jurisdiction and authority. We need to now get into free, prior and informed consent. This must happen within the forest management decisions.”

He added that the province’s recent intentions paper, intended to outline a new vision for B.C.’s forest industry, “missed the mark.”

“We’re not talking about improving consultation and accommodation. It’s much more than that,” he said. “We need B.C. to step up and legislate the legal requirements for First Nations to be part of the decision-making in forestry.”

Higgins said key areas that need change are the Timber Supply Review process which decides how much can be logged, the forest revenue-sharing model and forest policies and regulations. First Nations must be ensured that their forest tenures are economically viable, she said.

Higgins said that since 2013 the province has shared an average of less than five per cent of its stumpage revenue with First Nations each year.