Every time 10-month-old Shepsky Salix steps out in public with his handler Tobin Eckstein, he’s showered with attention by the dog lovers in his North Vancouver neighbourhood.

“I was carrying Salix down the sidewalk to grab a coffee, and suddenly I’d have a middle-aged woman from inside a store... come out to pet my puppy — who was in my arms — during a pandemic — I was very taken aback,” wrote Eckstein, recounting an incident that occurred a few months ago in a message to The Tyee.

Unfortunately, seemingly harmless actions — petting, whistling, eye contact and talking — can have severe consequences for Salix, a service-dog-in-training who’s learning the cues and instructions that are essential to support Eckstein, who is diagnosed with autism and ADHD.

“The attention he received caused some leash reactivity, which meant that he barked and tugged the leash to greet people, making him seem aggressive,” Eckstein said.

Any sign of aggression or unruly actions by service dogs can restrict their access to public spaces, which limits access for their handlers as well, Eckstein said.

Eckstein has been training Salix to perform tasks like reminding him to take medication, guiding him to an exit, helping him through crowds and recognizing and responding to panic attacks and self-harming behaviours.

Any distraction Salix faces while working could be dangerous.

Giving an example, Eckstein said that Salix helps him calm his anxiety levels in crowded areas. “So, if he got distracted, it could lead to me having a full panic attack, getting dizzy, and he could miss those cues too,” he said.

“Our attempts to communicate the gravity of the issue are often taken in a negative light by the public,” said Vancouver-based certified service-dog trainer Carol Millman, who’s also the founder of Wag the Dog Training. She said when people are asked not to pet the dogs, they "kind of see you as being sort of mean.”

Many assistance-dog handlers have tried to keep strangers away from their working dogs by using vests and capes that say, “Working Dog,” “Do Not Touch,” “Do Not Pet” and “Assistance Dog.” They often don’t work.

“I’ve had people just come up to us in the store and just pet the dog. They don’t realize that it can impact the dog and me,” said Vancouver resident Nicole Whitford, who’s always accompanied by her nine-year-old service dog Walker. “They don’t realize that’s a huge distraction for the dog who is assisting me in reaching things I cannot access because of my wheelchair.”

Experts who train these dogs say that people need to understand the dangers associated with their seemingly harmless actions.

William Thornton, the CEO of BC and Alberta Guide Dogs, said service dogs are trained to perform a task, such as guiding a person who’s visually impaired, assisting somebody in a wheelchair or serving a veteran who has PTSD. Offering the dog food or trying to pet it could distract the dog.

“It could be very dangerous, because let’s say you’ve got somebody who’s working a guide dog at a SkyTrain station. There are lots of mechanics... things moving around.... There’s the platform edge,” he added.

Any unsolicited interaction with a working dog could change their relationship and bond with their handler, especially when a handler isn’t capable of showing the dog the same level of affection given by strangers, say some experts.

“If you have somebody who’s a quadriplegic and who’s in a wheelchair, their ability to pet their dog and interact with them physically while they’re in their chair might be impossible,” said Tara Doherty, communication manager at the Pacific Assistance Dogs Society.

Doherty added that, over time, these dogs may realize they love being petted and begin to solicit attention from others. “It diminishes the bonds between the handler and the dog,” she said.

Unwanted petting could also mean less access to public spaces for people with disabilities. Eckstein said service-dog handlers like him have been asked to leave coffee shops, grocery stores and other public spaces because of disruptions caused by their excited dogs.

“People work really hard to keep their dogs calm and unobtrusive, because a service dog is only allowed in a public place if it is being unobtrusive to the public and not rushing up to them,” said Millman. The spaces service dogs are allowed to access are legislated by the provincial Guide Dog and Service Dog Act.

She added that patting a service dog could encourage them to approach people, who may report the incident and risk that disabled person’s access to a public place.

Service and guide dog owners believe that people need to be educated about the etiquette around service dogs.

“You would not borrow my wheelchair to play with it. Why play with my dog? It’s equally inappropriate,” said Doherty, who is a service dog user herself. “It is also inappropriate to ask why somebody needs a service dog. That is none of your business. You can ask them what the dog helps them with, and I think that’s respectful.”

Some service-dog handlers believe strict laws are needed, especially in instances where unwanted interactions with assistance or working dogs affect the handler’s health. 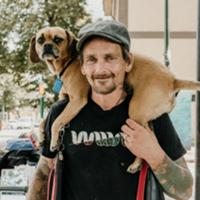 Dogs of the Downtown Eastside

“There should be some sort of safeguard such as fines, because telling people that they can be fined for touching your dog would be enough to get some people off your back,” Eckstein said. “And if the handler does get injured due to distractions, they should be able to have financial compensation... as it could lead to missing work for recovery, or medical costs if they don’t have insurance.”

Whitford said that instead of approaching the service or assistance dogs, people should approach the handlers and talk to them instead, or ask for permission to pet the dog. Some could say yes.

“I’ve met so many amazing people through my dogs. They asked questions about my dogs. And that’s totally fine to approach people and have a conversation,” she said.