When 18-year-old climate activist Naisha Khan wants to start a conversation about how banking fuels climate change, she asks someone how they think their bank makes money to pay them interest each month.

Canada has pledged to cut its greenhouse gas emissions by at least 40 per cent below 2005 levels by 2030, but since the 2015 Paris Agreement the country’s five largest banks have poured $726 billion into fossil fuels, according to environmental advocacy organization Stand.earth.

That’s based on numbers from the Rainforest Action Network’s latest annual analysis of the world’s largest 60 banks.

Ranked by the amount of financing they’ve provided to fossil fuel companies since 2016, the Royal Bank of Canada comes in fifth in the world with US$160 billion. TD Bank is ninth at US$129 billion, Scotiabank is 11th at US$114 billion, the Bank of Montreal is 16th at US$97 billion and CIBC is 22nd at US$67 billion.

Stand.earth adds up this financing and converts it to Canadian dollars using the average exchange rate for the five-year period of C$1.28 to US$1.

When asked by the CBC why it continues to fund fossil fuel projects, RBC “reaffirmed its commitment to net zero emissions, including a promise of $500 billion in sustainable finance by 2025,” the broadcaster reported. “It said it was also the first bank to commit not to lend to resource projects in Alaska’s Arctic National Wildlife Refuge.”

Canadian banks have an oversized impact on global fossil fuel financing, says Jason Disterhoft, a climate and energy senior campaigner for the Rainforest Action Network. Not only are three of the world’s top 11 fossil fuel-funding banks Canadian, but Canadian banks are also the most fossil-fuel intensive when looking at their overall investments, he says.

The U.S. oil and gas industry, according to the American Petroleum Institute, makes up just under eight per cent of that country’s GDP.

Five Canadian banks and eight U.S. banks make up almost half of the total fossil fuel financing of the 60 banks analyzed by RAN.

Fossil fuel funding has dramatically decreased over the past year, but until banks prove otherwise, that drop should be credited to COVID-19 disruptions, not a change of course, Disterhoft says.

Khan says people are surprised when she tells them these numbers.

“Banks have been a very silent player in the climate crisis for so long, and people are genuinely shocked to learn their money has been contributing,” she says.

“We do not consent to the banks using our money to fund such projects,” Khan says. “We’re using our collective reach to take a stand.”

Since Banking on a Better Future launched on April 1, Khan says a few hundred youth have signed its website pledge.

The campaign focuses on youth because they’ve traditionally been excluded from lessons around banking and investing, but they’re future customers and should know what their money will be used for, Khan says.

Indigenous groups like the Braided Warriors, Women’s Earth and Climate Action Network and Wet’suwet’en Nation have been raising awareness about fossil fuel financing for years, she adds.

Today, a handful of Indigenous and environmental organizations are creating a groundswell of advocacy to pressure Canadian banks to divest from fossil fuels, says Richard Brooks, Stand.earth’s climate finance director.

And youth could have a big impact on where banks put their money.

RBC, TD, Scotiabank, BMO and CIBC offer similar services, so the way they differentiate themselves is through reputation. “If that reputation is tarnished for a demographic that they care about, youth being one of them, then they’re very responsive to that,” Brooks says.

Because of that responsiveness, Brooks says it’s the responsibility of every bank customer, shareholder and employee to engage their bank in talks about divesting from fossil fuels, revising climate policies and investing in renewable energy.

That’s exactly what North Vancouver dad Christian Dietrich, who volunteers with the B.C. environmental advocacy group For Our Kids, did when he learned about his bank’s climate policies.

Dietrich, who previously lived in the United Kingdom, started banking with HSBC Bank Canada when he moved to B.C. in 2016 because it allowed him to easily set up his finances before he moved.

In March, Dietrich came across a BBC article where HSBC said it would phase out coal financing by 2040 — unless its shareholders disagreed.

“I just shook my head, thinking, ‘That’s a long way off and doesn’t have the sense of urgency we need,’” Dietrich says. “I felt embarrassed to be associated with them, and they should feel embarrassed for dragging their feet and not listening to science.”

Dietrich set up an account with Vancity, a credit union that shifted all of its investment funds to be fossil-fuel free in 2019 and has recently pledged to achieve net-zero emissions by 2040.

After a month of slowly transitioning his finances, Dietrich went into an HSBC branch to close his account. He told the teller it was because the bank lacked urgency and leadership when it came to the climate crisis.

During this process, he says a bank manager came to talk to him, telling him credit unions weren’t any better than banks. He says he hadn’t told HSBC where he was taking his money, but they’d guessed based on his reasons for leaving.

“She tried to keep a customer by putting other people down,” Dietrich said. “It was kind of fun. There were other people in the lobby, and they could hear what we were talking about.”

Dietrich is happy with his switch to Vancity.

Banks are owned by shareholders, while credit unions are owned by their members, Fowlie points out. Shareholders want to see quarterly performance on investments, but members can opt for community investment instead of dividends.

Both banks and credit unions control trillions of dollars and have a huge impact on the economy by deciding where money gets invested, he says.

“To meet the challenge of the climate emergency will take us all being open and transparent and sharing with each other how we’re getting there and what is working and what is not,” Fowlie says.

Vancity will disclose its first-ever emissions portfolio in its upcoming annual report. Fowlie would like to see other financial institutions do the same. He wants to see banks and credit unions adopt clear, universal language when talking about climate goals so customers can easily differentiate between their choices and offerings.

Switching banks is one way to push for change, but that takes the privilege of financial literacy, notes Khan. Because youth may still be picking up those skills, Banking on a Better Future tries both to engage people before they open their first bank account and provide guidance about how to switch when they can.

Dietrich says the federal government could encourage divestment if it introduced legislation similar to the U.K.’s 2013 Current Account Switch Service, which allows customers to switch between banks after one phone call. Financial institutions are then responsible for organizing the transition and covering any related fees.

Stand.earth’s Brooks agrees that this type of service could be a great tool in Canada, but stresses that public pressure here would be better spent focusing on what banks are currently doing rather than on future legislation.

To push for change, people should call their local bank branch and talk to tellers, branch managers and regional managers, Brooks says. Emailing banks and posting concerns on social media can also create change, he adds.

One teenager, for example, sat in front of an RBC branch in Ontario and offered to talk to people about the bank’s fossil fuel investments, until someone called local bylaw officers and the police.

After another Banking on a Better Future activist postered an RBC branch in Toronto in early May, the bank manager allegedly told the activist to “go die.” The activist posted about the incident on Twitter, and a social media representative for the bank said it would investigate the incident. 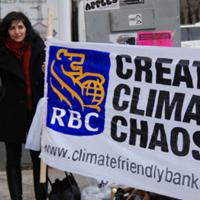 Khan says she’s already heard about internal bank documents sent to employees about the ruckus the movement has created.

Only three Canadian financial institutions have so far signed the 2019 UN Climate Action Summit’s Principles for Responsible Banking: National Bank of Canada, Desjardins Group and Vancity. This commits financial institutions to the emissions-cutting goals of the Paris Agreement and to the United Nation's 17 goals of sustainable development, which also has a 2030 deadline.

In an April report, the Canadian Centre for Policy Alternatives B.C. office notes Canada’s main banks are starting to finance green energy but have “barely begun to bridge the vast gap in funding between oil and gas and renewables.”

No country can claim to be a climate leader while its banks are helping cook that climate, RAN’s Disterhoft says.

When it comes to taking on the climate emergency, he says, delays can be deadly.