More than a million British Columbians believed eligible for the $500 COVID-19 recovery benefit that Premier John Horgan promised during last fall’s election campaign have yet to apply.

That leaves hundreds of millions of promised dollars unspent, and many people in danger of missing out on the payments as the June 30 application deadline approaches.

“I seem to remember the premier’s message was the cheque will be in the mail before Christmas,” said interim BC Liberal Leader Shirley Bond. “That certainly didn’t happen.”

Despite the high profile of the promise, the opposition continues to hear from people who are frustrated with the program, Bond said.

“If we have more than a million people who have not been able to take advantage of that grant, of course the government should continue to look at how on earth they’re going to support individuals and families that need it,” she said. “If that takes another adjustment, they should consider that.”

During the fall election campaign, Horgan said he wanted to get the recovery benefits out to people by Christmas, though he cautioned it could take longer.

“Our government is working to make life easier for families through the COVID-19 pandemic, and we know a bit of financial relief helps,” a Finance Ministry spokesperson said in an email.

By the end of April, the government had delivered about $1.3 billion through the program to 2.6 million British Columbians, they said.

But the ministry estimates 3.7 million people are eligible to receive the benefit, which means about 1.1 million people who are entitled to the money haven’t received it.

There are about 100,000 applications that the government has received, including from people applying as couples, that are “awaiting further information from applicants in order to complete the application and allow it to be reviewed.”

The spokesperson also said the ministry continues to receive about 2,000 applications a day. At that rate, another 120,000 or so applications would come in by the June 30 deadline.

The ministry does not appear to have plans to further advertise the benefit.

Asked what the ministry is doing to reach people who may not have heard about the program, the spokesperson said the ministry has promoted the benefit on social media since its Dec. 18 launch.

Mellisa Wilson in Sechelt said she and her husband are among those who have applied for the benefit, but not yet received it.

They applied in December, she said. “Dozens of phone calls and emails to the appropriate support numbers for the B.C. recovery benefit program always yield the same results,” she said in an email. “Absolutely nothing.”

They’ve not been contacted for additional review or documentation, she said. Nor did sending supporting information in February help.

“In my opinion this benefit, to provide quick financial relief during the holidays... has been an epic failure,” she wrote.

The ministry spokesperson said applications are held for review when more information is needed. In those cases, ministry staff reach out to applicants to ask for additional information.

“If it has been more than 30 days since an applicant received an initial confirmation email, we encourage them to contact our call centre toll free 1-833-822-0020, as it is possible the applicant may have provided an incorrect email or mailing address, or the information the ministry has on file does not match,” they said. 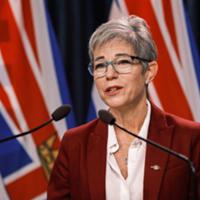 Information on the benefit and how to apply is available on the government website here.

Bond said the government could look for other ways to distribute the money to make sure it reaches everyone who is eligible. “One of the suggestions we made was issue the cheques and deal with the tax implications after the fact,” she said.

People deserve processes that work from their government and should get promised resources as efficiently and effectively as possible, Bond said.

“We’ll wait and see whether or not the deadline gets extended like other programs have,” she said.

“Whether you’re an individual or a family or a business, again this speaks to the fact that often announcements are made and there are not significant and concrete plans in place to deliver those programs.”