Over the last decade, the City of Vancouver has focused on growing the urban forest to combat tree loss and foster climate resiliency. But if that’s going to happen, the key will be promoting more trees on private land.

Vancouver’s Urban Forest Strategy, launched in 2014, has mostly focused on what it can control — protecting existing trees from being cut down and planting new trees wherever it can — and it has seen some good success, hitting its original goal of planting 150,000 trees by 2020.

Meanwhile, according to the city, the removal of trees on private land is responsible for reducing Vancouver’s urban forest from 22.5 per cent to 18 per cent between 1995 and 2014. Sixty-two per cent of the city’s trees were on private land at the time, the strategy noted.

A 2018 update to the strategy showed that while trees have increased on public property, in places like parks and on city streets, growth has still been declining on private land, where a third of the urban forest still remains.

In December 2020, the Vancouver Park Board set an admirable new goal for the strategy: to increase the canopy cover of the city’s urban forest from its current level of 23 per cent to 30 per cent by 2050.

But can that happen while trees on private land keep diminishing?

Stephen Sheppard, a professor in the faculty of forestry at the University of British Columbia, calls for a “multi-pronged strategy” that involves everyone, “not just on the public lands, but on the private lands with both the developers and the residents.”

De-paving roads and repurposing unused parking spaces for trees are good examples of actions the city plans to take on public land, Sheppard said. “Those are all good, but the tough ones are the private ones.”

He and his team of 70 staff at the Vancouver Park Board are responsible for ensuring trees on city streets, along with those growing on parks, golf courses and municipal property, have a chance to grow to full maturity.

But the only jurisdiction the city has over residents’ private property is a bylaw that prevents trees with a diameter of 20 centimeters or more from being removed on private property unless they’re unhealthy or hazardous.

Otherwise, planting and retaining trees is largely the responsibility of residents. When land is being redeveloped, the city requires that landscaping includes trees. But the trend towards assembling many single-family lots into one parcel for a larger development is eroding the urban forest, McLeod said.

“When the land gets assembled, and they develop one large tower or a series of townhouses, the amount of soil that you can support trees with gets reduced significantly.”

Developers can do more, said Dave Demers, a commissioner with the Vancouver Park Board.

“I’d like us to have better transparency on what’s been removed and where, and find a way of transferring that canopy elsewhere,” said Demers. “So developers pay a fee if they remove trees, so that tree will be invested elsewhere.”

David Tracey, executive director of the non-profit Tree City, started the TreeKeepers program in partnership with the Vancouver Park Board, to help with its 150,000 tree-planting goal. Between 2013 and 2014, the program made nearly 4,000 trees available in neighbourhood tree sales, where residents could purchase one for just ten dollars.

“But we always thought it’s more important to grow people and trees together,” said Tracey. 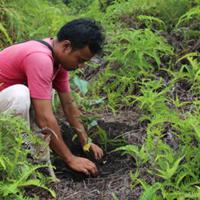 Yes, Planting Trees Can Fight Climate Change — If We Do It Right

Alongside individual workshops, TreeKeepers offered a “citizen foresters” program to teach basic arboricultural skills. They encouraged residents to take part in the long-term care of trees not only in their private spaces, but also in their neighbourhood.

But TreeKeepers ended suddenly after nearly three years, when the Vancouver Park Board shut down its funding. Since then, the tree sales have been organized twice a year by the park board.

Tracey is happy to see the city reached its goal of planting 150,000 trees last year. But he urges more outreach and education to nurture the relationship between people and trees, even on private land.

“We wanted to raise the most tree savvy citizenry in the world,” said Tracey. “With an informed citizenry, there’s a much better chance that we can have healthy urban forests, because they will support them.”