The school liaison officer program that saw police officers stationed in Vancouver public schools is no more after school board trustees voted to discontinue the 49-year-old program last night.

But the motion to cancel the program comes with caveats in an effort to improve and strengthen the district’s relationship with the Vancouver Police Department, which some parents and community advocates say undermines the program’s cancellation.

The cancellation comes 10 months after students, families and community advocates called on the Vancouver School Board to end the program that has 17 Vancouver police officers stationed in the district’s high schools and feeder elementary schools.

At the time, school trustees opted to hire a contractor to review the program while keeping officers in schools. A delayed request for proposals for the review meant its original deadline changed from December 2020 to March 2021.

Nearly 2,000 students, parents, district staff and community members participated in the review. The vast majority of overall respondents were neutral or in favour of the program — though most participants, regardless of their stance, admitted they did not know the program’s purpose.

But just over half of Indigenous respondents and 60 per cent of Black respondents had negative views of the program, citing fears and anxieties about police, as well as past experiences of harassment and violence from police in and outside of schools.

Trustee Lois Chan-Pedley said it was with those Black and Indigenous students in mind that she and fellow trustee Barb Parrott crafted a motion to cancel the program. The motion was presented to the board during its meeting Monday.

“We have to back up and renegotiate our entire relationship. Crucially, I really believe we have to cancel the program to have this conversation, and we can’t do this on the backs of Black and Indigenous students,” she said.

Chan-Pedley apologized to the students, many of whom identified as people of colour, who spoke to the district in support of the program, including five current and former members of the VPD Cadets program, one of many programs that school liaison officers run and recruit students to. Other programs focus on mental health, fitness and leadership.

“I know that this program has been really good to you and kids like you. Please know that I’m doing this with a really heavy heart, and I still want to do everything I can to support you,” she said.

Trustee Parrott, who counts three former police officers among her immediate family, apologized to her deceased father for putting forward a motion to take police out of schools.

“I am concerned about the objective, which I’ve been told isn’t a priority of the VPD, to use the opportunity to recruit students to the profession like a job fair, but daily,” she said, adding students are at their most impressionable stage of life while in school.

“When I started teaching in the ’70s, there were also two other groups that wanted to recruit at secondary schools, and they were the military and the KKK, and both of course were stopped immediately.”

The motion didn’t just stop at discontinuing the school liaison officer program, however. It also requires the school board to:


In a press conference held before the school board meeting, several groups, parents and educators outlined their disappointment with this section of the motion.

“It’s very bootlicking, and I don’t appreciate it,” said Chrissie Oleman, an Indigenous artist, activist and parent with children in the Vancouver district. Oleman worked with other parents to end the presence of uniformed police officers at the Grandview/¿uuqinak’uuh Elementary annual barbeque.

“A worker at my school was like, ‘Any free lunch is a good lunch,’ and I’m like, ‘Not when they’re glamourizing police presence. It’s not OK.’”

Kyla Epstein, a white parent of a mixed-race child in the district, took particular issue with the letter of thanks the school board plans to write to the Vancouver Police Department for the school liaison officer program.

“No appreciation is needed to the VPD for its years of harm, and in fact an acknowledgement and some repair is required for those who have been harmed by the decades of this program,” she said.

Trustee Jennifer Reddy was the lone voice on the board to say the measures overstepped the mandate of the school liaison officer program review.

“It’s becoming increasingly unclear exactly how the discontinuation of the SLO program will take place when there are direct references to continue working with the VPD,” she said, adding the only reference to Black, Indigenous and students of colour in the motion was about working with police.

“My understanding is we conducted this review about the removal of police in schools. There wasn’t a review of the kinds of programs and services students would want to see.”

Trustee Fraser Ballantyne put forward an amendment to change the motion from cancelling the school liaison officer program to ending the program “in its current form.”

Citing his concern about a “creep” of bullying, sexual exploitation and crime in schools without police presence, Ballantyne pointed to ongoing gang recruitment in schools and an incident last fall with a man wandering into Sir Richard McBride Elementary during school hours.

“It shouldn’t be a ‘we win/you win’ kind of situation. Basically, we need to consider how an SLO can be best trained to care for and to keep safe everyone in our schools,” he said, adding it was “disrespectful” to students who spoke out in favour of the program to discontinue it.

Parrott, however, noted school liaison officers have been in schools as gang recruitment, drug sales and strangers wandering into classrooms have continued to occur.

“The SLO cannot and is not fixing those systemic problems that are in our communities and as a result are in our schools,” she said.

But in the end, only one trustee voted against the motion to cancel the school liaison officer program: Reddy, who has been vocal in her support of removing police from schools since last June.

“This motion doesn’t go far enough to be unequivocally clear that in fact school liaison officers — police — will be removed from schools. It spends more time delineating what the next steps of working with police in schools will be, much of which is already covered in our own protocol.”

Parent, educator and police abolitionist Parker Johnson, who is Black, has been pushing the district to cancel the program since last June. He said if he were on the board, he may have sided with Reddy, too. 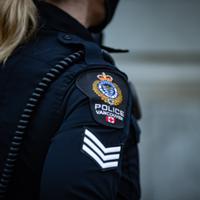 The Deep Divide on Police in Vancouver Schools Continues

“My question and concern still carries regarding working with an organization that says there is no systemic racism and that they do not have any in their own organization,” he said, referring to the Vancouver Police Department.

“That ongoing challenge: if you can’t acknowledge something, how am I supposed to trust you with my child or with my community, when the community itself feels like it’s being abused by you?”

The end of the school liaison officer program is a “small w” win, Parker said. But he remains concerned that the only way most trustees seem to envision safety in schools is through the continued, albeit more limited, involvement of police in schools.

“Their absence does not mean that we need to be afraid that we’re going to be rushing down the slippery slope of lawlessness in the schools. Because they didn’t provide that type of assurance in their existence,” he said.

“And in their absence, we can imagine other things, other possibilities.”