After years of fighting gentrification of single-room occupancy hotels, advocates for low-income tenants in Vancouver’s Downtown Eastside neighbourhood are celebrating BC Housing’s purchase of a former SRO.

BC Housing announced today it has bought the Burns Block at 18 W. Hastings St. The building will be operated by Atira Women’s Resource Society and will provide housing for women who are homeless. The 30 units are earmarked for women who are committed to reducing or stopping substance use.

The province spent $10.9 million to buy the building and will spend $1.3 million a year on operations funding. Seventeen units are currently vacant and will be available immediately to women who are homeless. The 13 tenants who live in the building will continue to pay market rent, but Atira will help them relocate if they want to move.

In 2006, tenants who lived at the Burns Block were given just a few hours to leave after the fire department inspected the building and said it was unsafe because fire exits had been blocked. Many ended up in homeless shelters or on the street.

The emptied building was bought by Reliance Properties and units were renovated into “micro-suites” with tiny bathrooms and space-saving features like built-in cupboards and Murphy beds.

When the building reopened in 2011, city councillors with Vision Vancouver, a party that had promised to end street homelessness, heralded the redevelopment as affordable housing for workers who were being squeezed out of downtown Vancouver.

Jon Stovell, president and CEO of Reliance Properties, said the decision to sell the building to BC Housing was “bittersweet.”

“On the one hand, we are sad to give up an asset that helped define Reliance Properties as a creator of innovative housing solutions,” he said in a statement. “On the other hand, we are pleased to help fill an important community need for women experiencing homelessness.”

Stovell said that in the 10 years since the renovation was completed, homelessness has gotten worse in the Downtown Eastside. In the past several months, half the tenants moved out of the building because of safety concerns, such as hostile behaviour from people outside the building, he added. 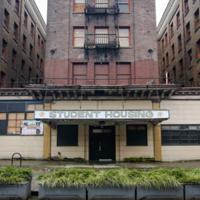 After Two Disastrous Decades, Vancouver Gets Serious about Protecting SROs

“Finally, we have justice for the Burns Block,” said Wendy Pedersen, an advocate with the SRO Collaborative, which helps SRO tenants organize. She pointed out that David Eby, B.C.’s attorney general and current minister responsible for housing, had worked with SRO tenants in the Downtown Eastside when he was a lawyer with Pivot Legal in the mid-2000s.

“The land, the buildings and the people are important to us in the community,” Pedersen said. But more work is needed on the City of Vancouver’s plan to buy the rest of the city’s privately owned SRO buildings, Pederson said — “100 more hotels to go.”

The number of people who are unhoused grew during the COVID-19 pandemic, and the province and municipalities have struggled to deal with growing tent cities in urban parks. BC Housing has been buying up hotel and motel properties as a way to quickly house people.

The purchase of the Burns Block follows BC Housing’s decision to buy six other hotel or SRO properties in downtown Vancouver earlier this month.