For decades, the Army and Navy department store at 15-27 W. Hastings St. served Gastown and the Downtown Eastside, providing everything from clothing to hardware, food and camping supplies at low prices.

But the Army and Navy chain of stores across Western Canada couldn’t survive the COVID-19 pandemic, and the Gastown location has been sitting empty since June 2020.

Homelessness also increased across B.C. during the pandemic, and in February the province announced the building on West Hastings would open as a shelter for unhoused people. It’s part of a strategy to secure enough units of housing to close down a large tent city at Strathcona Park.

Renovations are now underway, and the building will open by mid-May at the latest, although operator PHS Community Services Society hopes the shelter will be open by April 30. That’s also the deadline the park board has given for residents sheltering at the tent city at Strathcona Park to leave.

“I think it’ll be a really good space for people just looking to get inside, get stabilized, get some help — and then we help them move on to permanent housing,” said Tanya Fader, director of housing for PHS.

PHS plans to name the shelter after Bud Osborn, a Downtown Eastside poet and drug policy activist who died in 2014. While the Army and Navy occupied two buildings on Hastings and Cordova streets, only the Hastings Street building is being used as a shelter.

The province also leased an industrial building on Terminal Avenue for another 60-bed shelter and has been buying hotels and hostels to use as permanent housing as well.

The Osborn will be divided into two parts, Fader said: a sleeping area and a drop-in space people can use during the day, making it possible to clean the sleeping area every day without putting residents back on the street.

PHS plans to design the shelter similarly to its Victoria emergency shelter at the Save-On-Foods Memorial Centre. That shelter’s configuration — which uses beds enclosed with movable walls — provides more privacy than the bunk-bed configuration used in other homeless shelters, Fader said. The shelter also needs to be set up to reduce the risk of COVID-19 transmission, including enhanced cleaning. 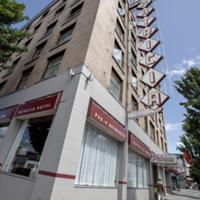 PHS has been doing outreach work in Strathcona Park for months, and Fader said she believes most residents will accept offers of housing or shelter.

In Victoria, many of the people who moved into the 47-bed Save-On-Foods shelter were later moved to Paul’s Motor Inn (now called the Soleil), a motel the province bought in 2020 to provide housing to homeless people.

The Army and Navy served the Downtown Eastside for years, and Fader said it’s good to see the building put to use again instead of sitting empty.

The city and province have leased the building for the next two years, although that may be extended to three years, Fader said. Longer term, the space may be converted to a drop-in space.

“It is the Hastings corridor. Everybody knows there’s tons of homeless people, and it’s better to get them inside for everybody’s sake,” Fader said.