Relatives of seniors who live in an assisted living home in Vancouver’s Chinatown neighbourhood want the sale of the building stopped after seniors were told they had two months to find another place to live.

Grace Seniors Home at 333 E. Pender St. is privately owned, but a sale to Lu’ma Native Housing Society is in the works.

To buy the building, Lu’ma used federal money from the Rapid Housing Initiative, which funds projects that house people who are homeless or at risk of homelessness. BC Housing agreed to contribute capital funding to renovate the building.

Tim Lam’s 90-year-old grandfather, Cheang Che Fu, lives at the home and his family found out about the impending sale through an ad in a Chinese-language newspaper.

The Cantonese-speaking residents received a letter on March 29 stating the home would close in June, and “arrangements” were being made for “the proper resettlement of our residents.”

After a Vancouver Sun story about the situation, BC Housing said the seniors could choose to stay in the building after it changed ownership.

But Lam said that has still not been communicated to residents, and staff at the building are still telling residents they will have to leave.

That’s causing stress for many of the frail seniors who have lived at the building for years, Lam said. Some don’t speak English and don’t have families to help them, and Lam fears those residents are entirely in the dark about the situation.

In a letter sent to BC Housing, the families said they worry the situation will have dire consequences for their frail relatives.

“We are concerned how the displacement will impact the overall health of the senior residents and expect many to suffer physically and mentally from the move that one family described as ‘an earlier death sentence,’” the families wrote in the letter.

The families asking for the sale to be stopped, for Grace Seniors Home to continue running as a culturally supportive care home for Chinese seniors and for a public inquiry into how the transaction went ahead.

The situation is “heartbreaking,” said Sara Goldvine, vice-president of communications for BC Housing. But she said that if Lu’ma had not bought the building, it could have been bought by a developer and redeveloped into condos.

Goldvine said the housing will not be designated as seniors’ housing when ownership is transferred to Lu’ma. It’s unclear whether the new operator of the building will continue the Cantonese-language services, Chinese meals and cultural programming that is currently offered at Grace Seniors Home.

“The challenge with the situation is that we have a private owner who has decided to sell the building,” Goldvine said. “The real story is about the failure of the private market to meet the housing and health needs of this community. The good news is that by purchasing the building, Lu’ma is ensuring that this building is owned by the community.”

The Tyee reached out to Lu’ma Native Housing Society, but did not receive a response. The Tyee was unable to reach Stephen Lee, one of the owners of 333 Pender, at his home in Burnaby.

Goldvine said BC Housing and Lu’ma staff were set to meet to discuss a relocation plan for existing tenants, but the current management of Grace Seniors Home sent tenants the letter telling them they would have to move before that official relocation planning had started.

Many Cantonese-speaking seniors have made Chinatown their home for decades. When Lam’s grandfather goes for walks in the neighbourhood, he bumps into people he’s known for years, and he’s able to walk to his doctor’s office. 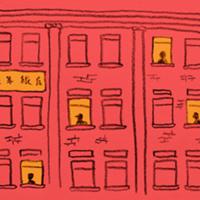 The need is especially dire for low-income seniors. Michael Tan, co-chair of the Chinatown Legacy Stewardship Group, estimates that removing the 70 units of housing at Grace Seniors Home will destroy 20 per cent of the culturally supportive seniors housing stock in Chinatown, leaving just 356 units.

“That stock will permanently disappear over time,” Lam said.

Christina Lam, Fu’s daughter, has been in touch with other families who are having a hard time finding alternative housing for their parents and grandparents. She knows of one couple who are 95 and 98 and have been together for 80 years, who may have to be placed in separate assisted living homes.

She’s been able to find a place for her dad in an assisted living home in Burnaby, but the facility doesn’t provide any Chinese-language services. Lam said she was able to find a place relatively quickly because her family can pay market rent, but other residents who need subsidized housing will face years-long waiting lists.