The BC Greens are calling for the province to radically alter its pandemic response and aim for COVID Zero, making the two-member caucus the first Canadian party outside Atlantic Canada to call for strict measures to eliminate the virus.

The party said the NDP government has fumbled the variant-driven third COVID wave in B.C., a sharp departure from more than a year of generally multi-partisan support for the province’s pandemic strategy.

“We need to see the premier of British Columbia, not pointing the finger at young people or anybody else but taking accountability and responsibility for what is happening in this province under his watch,” Leader Sonia Furstenau told The Tyee.

A year ago there was a sense of unity and a common goal, she said. “But pretty much since the election, instead of a proactive approach from the government, we are seeing an increasingly reactive approach.”

“It has been really disappointing that instead of anticipating and being prepared for this third wave, we have just let it arrive in this province.”

Rather than simply trying to prevent the virus from overwhelming hospitals, the COVID Zero approach sets out to eliminate the virus completely through short-term lockdowns, border controls, travel restrictions and relentless testing and contact-tracing to drive transmission to zero.

Even if we don’t succeed, Furstenau said, aiming for zero “will still save lives.”

The Greens’ call echoes criticism from epidemiologists, doctors and modellers that the approach could have prevented variants from taking hold in B.C. And it comes on the same day the province announced a record 1,293 COVID-19 cases in the province.*

Provincial health officer Dr. Bonnie Henry has said B.C. is about a month behind Ontario in terms of the spread of variants that are more transmissible and cause more serious illness. That province has just imposed a stay-at-home order and closed in-person schools in Toronto.

Furstenau said people are “quite anxious” because it’s clear from other jurisdictions like the United Kingdom that the variants can quickly take off and spread rapidly.

But Furstenau said the strategy is useless without banning non-essential travel and supporting people to stay home and small businesses to close.

“I don’t understand why we would be passive and not proactive at a moment like this.”

Enforcing non-essential travel measures — which Premier John Horgan said he would not do — moving classes online for most students, and paying non-essential businesses to stay closed for three weeks could help to rapidly stop transmission of the virus, Furstenau said.

She also said the vaccination strategy, now largely age-based, should also be adjusted to target younger people and essential workers, and rapid testing, contact tracing and variant screening should be ramped up across workplaces and in clusters.

The Greens would also like to see daily briefings with health officials return with increased time for media questions. Cases, including details on variants, should be reported on weekends and holidays when there are currently no updates. And messaging should target people breaking COVID-19 rules.

“Neither the methods nor the messaging are working. It cannot only be up to individuals to deal with this crisis,” the party said in a news release.

B.C. has reported nearly 1,000 cases per day in the last week — double the average from one month ago — and an increasing proportion of variants identified through whole genome sequencing.

There have been 3,766 cases of variants reported as of Wednesday, mostly the B117 strain first identified in the United Kingdom. But there have been at least 878 cases of the P1 variant, the largest cluster identified outside Brazil where it originated.

But experts say lagging data and a lack of transparency around where variants are spreading is hampering B.C.’s ability to respond as the variants move toward becoming the dominant strains in the province in the next few weeks.

The Globe and Mail reported today that B.C. would reduce its screening for variants among positive COVID-19 test samples. 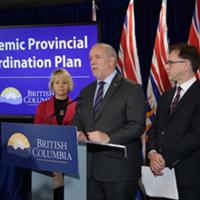 How BC Fumbled the Third Wave

The aim of the BC Centre for Disease Control is no longer to be able to track every variant, and genomic sequencing to identify new strains will be used to learn about where cases are increasing.

Henry appeared to downplay the presence of these more transmissible and aggressive variants this week, but experts estimate they may already make up as many as 50 per cent of cases in the province.

Even though vaccines will prevent some deaths in the most vulnerable during this wave, thousands of cases mean many more will be living with long COVID and permanent health issues.

Furstenau said there a critical few months before most people are vaccinated, and action is needed now.

“I don’t understand why we would accept that thousands of people could get sick over the next months while we wait for the vaccine to kick in.”

*Story updated on April 8 at 4:48 p.m. to include new information on the province's daily COVID-19 case count.