Provincial health officer Dr. Bonnie Henry reiterated today that current measures will prevent the variants from spreading if they are followed.

Alberta Premier Jason Kenney announced today the province would tighten restrictions to deal with the risk of rapid spread of the variants. Most of the measures are already in place in B.C.

And Toronto health officials announced that schools would be closed beginning Wednesday, a shutdown affecting about 300,000 students.

But Henry appeared to downplay the impact of variants in B.C. as she reported an additional 207 variant cases and 1,068 new cases in the province.

“It just tells us that once this virus gets hold it can spread very quickly, despite having routine testing protocols,” said Henry, after a weekend in which the province recorded around an average 1,000 new cases a day.

There have been 3,766 total variant cases in B.C., mostly the B117 variant first identified in the United Kingdom that is now concentrated in the Fraser Health region.

However, B.C. is home to the largest cluster of the more fatal and transmissible variant P1 outside Brazil, where it was first identified. There have been 877 confirmed cases in the province.

Henry estimates a third of the province’s newest cases are variants, but many have not been confirmed through testing.

“That tells you that there is a time delay before we can confirm that a specific variant is causing illness,” said Henry. Final confirmation is based on a lengthy genome sequencing process.

Henry stressed that the P1 variant, which was initially linked to multiple clusters and transmission events in Whistler, is still a small percentage of cases in the resort community and elsewhere in the province.

But variants are also known to send people to hospital in higher numbers due to more serious illness, something B.C. is already seeing, Henry said. While variants are just three per cent of recorded active cases, they account for 63 of the 326 people in hospital — 19 per cent.

Henry said more young people are being admitted to hospital, which is expected as vaccinations of older age groups reduce their risk. She did not provide information on the number of young people currently hospitalized.

The same factors that led to the spread of the original virus are fuelling the transmission of variants, she said.

“Unnecessary travel and social gatherings are fuelling the fire for variants of concern and transmission as well,” said Henry.

But the province has not issued an enforceable order against non-essential travel despite concerning levels of spring break travel that transported viruses and variants around the province. 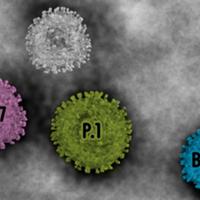 Why the P1 Variant Poses So Great a Threat to BC

Henry said risky socializing, chains of transmission from essential workplaces to homes, and pausing AstraZeneca vaccinations for essential workers will mean young people will make up an increasing proportion of cases in the near future.

B.C. is still about a month behind Ontario, where variants account for about 60 per cent of new cases, she noted.

But Henry said this isn’t the time to change course and divert more vaccines towards essential workers and younger people.

And she defended staying the course with no new restrictions, even while acknowledging complacency, confusion around the rules and apathy have caused many to disregard public health orders.

“We have the measures in place that we know will work.”