Conservative Leader Erin O’Toole said Tuesday that B.C.’s northern communities need to accept the risks that come with economic development and count on government to put protections in place.

O’Toole’s comments came after a question about the dramatic increase in dangerous goods travelling by rail through northern communities at an online meeting hosted by the Terrace and District Chamber of Commerce.

In his response, O’Toole lumped rail safety in with LNG development and increased port access and tanker traffic as risks to be managed.

“The federal government can help build resiliency and help build that capacity to ensure that any risks are mitigated from this economic activity because we need to make progress, but it can’t be at sacrificing the environment or safety.”

Rail safety has been a rising concern in the region, where exports of propane and other combustibles from ports in Kitimat and Prince Rupert are expected to increase significantly in the coming years.

Railways are becoming more congested due to Prince Rupert’s port expansion, and the transport of dangerous goods is expected to continue increasing. Currently proposed or under-construction projects would add an additional 350 rail cars transporting dangerous goods each day along northern rail lines.

Terrace chamber president Tom Keller posed the question from a community member, noting that “almost all of our major buildings are within a stone’s throw of the railway tracks,” including the hospital, ambulance station and fire department.

“How do you see supporting the overall rail safety and local governments in their ability to respond to potential incidents or put a plan together to avoid incidents?” Keller asked.

O’Toole initially skirted the issue in a rambling answer, first attacking the Liberal government’s failure to track “lessons learned” during the pandemic before moving on to his experience in business and the military, and finally touching on an oil spill near the Kitsilano Coast Guard station.

The point O’Toole appeared to be making was the importance of learning from past mistakes.

“I think we’ve learned some lessons by how we have to make sure that our coastlines and our environment is protected to the highest standards possible,” he said. “That will be our commitment — world-class, world-leading, best. How can we partner better on local priorities with municipal leaders, with Indigenous leaders, with the private sector?”

But his comments come in the wake of two recent rail safety audits showing Transport Canada has repeatedly failed to ensure the safety of communities along the nation’s railways, despite years of warnings.

Anne Hill, co-chair of the advocacy group North West Watch, says the society agrees with O’Toole that progress can’t be at the risk of the environment or safety, but questions whether the federal government is doing enough to mitigate hazards posed by dangerous rail cargo.

“The requirement that railways determine their own operating rules for track inspection, maintenance and repair has been questioned by the auditor general of Canada, who called it ‘a big loophole,’” Hill said.

“We have grave concerns about the spill hazard to the Skeena estuary, which is a critical and fragile salmon rearing area for the whole watershed. We haven’t seen evidence that the federal government is taking mitigation of these hazards seriously.”

In January, Canada’s Office of the Auditor General completed a report that followed up on recommendations it made after the 2013 Lac-Mégantic rail disaster in Quebec, which killed 47 people.

The followup audit found that while Transport Canada had made some progress, it was not assessing the effectiveness of safety management systems required from industry, “despite the many reports over the last 14 years recommending that Transport Canada audit and assess these systems.”

In October, an independent audit from the commissioner of the environment and sustainable development, part of the federal auditor general’s office, also found that as transportation of dangerous goods increases through the province’s north, better oversight of companies by Transport Canada is needed to ensure the safety of railway communities.

It found that Transport Canada had not rectified many shortcomings identified in a similar audit nearly a decade earlier. More than half the emergency response assistance plans in place for regulated companies had not received final Transport Canada approval, it noted.

Despite O’Toole’s promises, he’s saying “we have to choose between safety and the economy,” Bachrach said. “I think we can chart a course into the future that is respectful of communities in the northwest.”

Bachrach, a New Democrat, said while the Liberal government has said it is taking rail safety concerns seriously, the Conservative Opposition has been silent on the matter.

He added that the answers suggest O’Toole isn’t familiar with northwest B.C. and its issues.

“That’s unfortunate, because this is an important part of the world,” Bachrach said. “Representing this place means you have to stand up for residents and communities, not just hand the keys over to multinational corporations and cross your fingers that everything’s going to work out.”

During the talk, which O’Toole joined from Ottawa, the Opposition leader leaned heavily on promises of post-pandemic economic recovery. He described visits to the region as “very powerful for me,” though he said he has never visited Terrace specifically.

“I speak about your part of this great country a great deal.”

The northwest is seen as an important gateway to get Canadian oil and gas resources to overseas markets. Infrastructure projects like TC Energy’s Coastal GasLink pipeline, which is under construction and would terminate 60 kilometres south of Terrace at Kitimat, made national headlines the past two years when Indigenous land defenders and supporters were arrested by police while blocking access to the pipeline route.

In February, Parliament voted down a Conservative attempt to open up the northwest coast to oil tanker traffic through a bill that would have overturned the Liberal’s 2019 Oil Tanker Moratorium Act. The act turned a decades-old ban on oil transportation on the north coast into a law.

O’Toole said Terrace is important as a regional hub, and “infrastructure demands” are part of that role. “But for Terrace to continue to grow, we must be able to open up the economy,” he said.

“This isn’t a time for Ottawa to reimagine our economy or decide that aluminum jobs in Kitimat are unacceptable or that LNG and the potential benefits it brings to your community and to the country are somehow not in line with Mr. Trudeau’s vision of the Canadian economy, the reimagined ‘build back better.’”

Large-scale development in neighbouring Prince Rupert and Kitimat have placed demand on Terrace’s infrastructure and housing and brought social issues. City Coun. Sean Bujtas asked O’Toole how the community could lobby the federal government for financial support to address issues in the community. 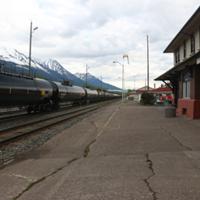 A BC Rail Disaster Waiting to Happen? Audit Bolsters Warnings the Risk Is Too High

“When there is a major project like LNG in the national interest — and it truly is, because of what it can do in terms of employment and GDP growth over several decades — there has to be a recognition of the impact and the strain on infrastructure in the area,” O’Toole responded. “As Terrace is an important regional hub, that has to be part of the discussion.”

When Bujtas repeated his question later in the discussion, calling on O’Toole to lobby for the community’s infrastructure and social needs in Ottawa, O’Toole said compassion, harm reduction strategies and mental health resources are important, but didn’t provide any concrete solutions.

He said he looks forward to visiting the community in the future.

“I truly wish, as I said at the outset, I could be there to see the infrastructure needs firsthand, to meet with folks on the ground, but obviously we can’t do that,” he said.