Dozens of eligible Indigenous people say they were denied vaccination appointments by Vancouver Coastal Health booking agents despite the B.C. Ministry of Health confirming their priority earlier this week.

All Indigenous people over 18 were eligible to book a vaccine in every health authority starting Wednesday morning, the ministry said in its Tuesday COVID-19 statement. The Vancouver Coastal website provides the same information.

But a number of people The Tyee spoke to said that when they called Wednesday, staff told them they were ineligible, used culturally inappropriate language and denied them bookings multiple times or hung up.

And some callers worry the fumbled rollout will create further distrust and hesitancy for Indigenous people who already experience widespread racism in B.C.’s health-care system.

“The people on the phone, they probably don’t realize how impactful it can be to be turned away,” said Peyton Straker, a Bear Clan member of Keeseekoose First Nation in Saskatchewan who is Two Spirit. “It situates you as lesser than, and that’s the messaging we’re forced to internalize.

“To face that in the health-care system too, it’s just another barrier we shouldn’t have to navigate.”

The decision to prioritize all Indigenous people for vaccination reflects the disproportionate risk of serious illness and death from COVID-19 they face due to the effects of colonization, including limited access to primary health care, crowded housing, poor water quality and higher rates of chronic illness.

Straker, 27, called the VCH booking line Wednesday around 8:30 a.m. They live with their younger sister who is immunocompromised and wanted to protect her and their household as soon as possible.

As soon as Straker introduced themselves as Indigenous, the agent told Straker appointments were for Elders only.

Straker had the webpage open and asked the agent to please check her own website. After conferring with her manager twice, the agent told Straker some staff hadn’t been made aware of the change but that Straker was correct.

“Both of the things she told me were incorrect,” said Straker. “I was too turned off to call back and get in a fight with them, and then they used the term ‘Aboriginal.’” Straker found this term problematic, and the provincial government does not use it and discourages others from using it.

Another person The Tyee spoke to, who asked their name be withheld, said they were turned away the first two times they called, and finally got through the third time.

“The third lady was great and friendly and got me an appointment for tomorrow, so that is great, but this amount of medical racism is such a shame,” they told The Tyee in a message.

Later on Wednesday, Straker posted about their experience on Instagram and received more than 70 messages from others who say they experienced the same issue and were turned away from booking.

A friend of Straker’s replied that when they finally got through, they were told all slots for Indigenous adults were full.

“I know that a lot of my peers are trying to get the vaccine and I wanted to make sure they knew that was the type of interaction I had,” Straker said of their post, which they said has been shared hundreds of times.

Vancouver Coastal Health told The Tyee in an email that call centre staff were informed of the expanded eligibility for Indigenous people but “we understand this change may have taken a few hours to fully operationalize.”

There are ample appointments available for Indigenous people over 18 and anyone else who is eligible for a vaccine, wrote spokesperson Rachel Galligan.

“We continue to work closely with TELUS to ensure all call centre staff have received appropriate training to deliver a culturally safe experience for Indigenous peoples,” she said. “We take responsibility and apologize to those whose experience did not reflect this standard.”*

Squamish leader Khelsilem acknowledged he was hearing similar reports from community members on social media, although some were able to book slots.

Vaccine bookings have hit some bumps since they opened to the oldest members of the general population in February. As recently as this week, Lower Mainland adults 55 to 65 had to line up early in the morning to book in-person at their community pharmacies.

June Scudeler, who is Métis and an assistant professor at Simon Fraser University, said she even had trouble trying to book when Indigenous people older than 55 became eligible nearly two weeks ago.

The booking agent asked if she was an Elder and turned her away when she said no. Elder is not synonymous with a certain age, and is a title determined by a person’s community.

“They were missing that nuance,” said Scudeler, who was able to book for the following week once she called back.

In a Wednesday afternoon news release, the First Nations Health Authority confirmed that all Indigenous people over 18 are eligible to book a vaccine.

Khelsilem and Straker both chalked the issues up to poor communication from government and health authorities to booking staff, who are contracted through Telus.

On Tuesday, health authority booking lines will be replaced by a single line, and an online booking system, currently operational for Fraser Health only, will be available provincewide.

Indigenous people are not the only group to face booking challenges, Straker noted, but it was important to get it right for the group. 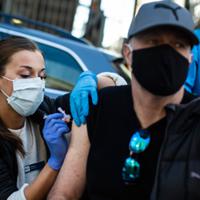 BC Speeds Up Its COVID Vaccination Plan

“It’s difficult enough as young Indigenous people to navigate a health-care system that has literally killed us as recently as this year,” they said. “There’s a serious mistrust that needs to be taken into account. I don’t feel they’ve adequately done that.”

They hope Vancouver Coastal Health will apologize and improve communication to staff about eligibility and culturally safe language to avoid confusion. Indigenous people, already hesitant about dealing with the health-care system, should not be forced to argue with operators to get an appointment, they said.

“Most Indigenous people are at least cautious, if not resistant,” said Straker. “Every time a supposed service launches, it’s an opportunity for every system to do an adequate job of making us feel safe and not discriminated against.

“I’m angry about having to fight this hard. I should have an appointment right now.”