Best known for their ability to draw massive crowds in support of climate justice, the Sustainabiliteens are taking a different approach for today’s global day of youth action by drawing attention to the work of Indigenous activists fighting the Trans Mountain Pipeline expansion project.

Along with hundreds of young people across Canada and many more worldwide, the Sustainabiliteens, a group of high school-aged activists from across Metro Vancouver, will be gathering outside Environment Canada’s downtown Vancouver offices at 10 a.m.

In addition to calling for an end to the Trans Mountain pipeline expansion project, the group will be acting in solidarity for the first time with Indigenous land defenders, particularly the Tiny House Warriors and Braided Warriors, who have faced arrests for their actions and allege brutality on the part of arresting police officers.

“In the past, Sustainabiliteens hasn’t done the best job of standing in solidarity with Indigenous peoples,” said Tavie Johnson, a member of the group, which she says is largely made up of white people.

“Traditionally the environmental movement and the conservation movement have been very whitewashed, and we know that we can’t have climate justice without racial justice and Indigenous sovereignty and Indigenous rights. All of those are extremely interconnected.”

While the Sustainabiliteens drew over 100,000 students, workers, parents and elders to strike for the climate in September 2019, this time they want people to stay home and watch their livestream on Instagram or Facebook accounts because of the pandemic.

“It’s closed to the public, so we’re keeping it super small within our movement, and we’re taking every precaution to keep everyone safe,” Johnson said. It’s not a social gathering, which provincial health rules dictate must be outside with 10 people maximum, but a fight for their futures, she added.

Speakers at the event today include Stacy Gallagher, an Indigenous land defender who was recently sentenced to 90 days in jail for criminal contempt after he was arrested for performing a pipe ceremony along the Trans Mountain pipeline route.

“I am certain in the fact that if a white person had been doing that, that simply would not have happened,” Johnson said.

A press release for the event specifically mentions solidarity with the Braided Warriors, a group of mainly Indigenous youth just a few years older than the Sustainabiliteens.

Braided Warriors made headlines recently for their protests in the lobbies of the downtown Vancouver offices of insurance companies behind the TMX project, as well for blocking road and rail access to the Port of Vancouver.

The TMX project would triple the volume of heavy oil that could be moved from the Alberta oilsands to Burnaby and the Port of Vancouver.

At least 10 Braided Warriors members were arrested during the protests. But the youth involved alleged violent treatment by arresting officers, particularly when the police broke up the Braided Warriors’ sit-in protest in the Bank of Montreal’s Vancouver headquarters last month.

The Vancouver Police Department has vowed to conduct an internal review of the arrests.

The Tyee reached out to the Braided Warriors for comment but did not receive a response.

Members of the Sustainabiliteens group have never been arrested or confronted by police, Johnson said. 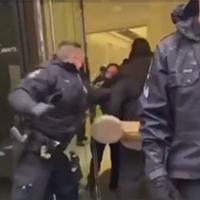 “Again, the unfortunate reality is that we are a very predominantly white movement, and so that comes with a certain level of privilege,” they said, adding Sustainabiliteens have always had designated group members as police liaisons, while other climate groups, like Climate Convergence, have acted as protest marshalls to engage with police during their events.

“We’ve generally maintained a good relationship with the police; there’s never been any tensions or conflict. And yes, I mainly pin that on the fact that we are white.”

Like the Braided Warriors and Tiny House Warriors, a group of Indigenous protesters who have been living in tiny homes along the proposed TMX route, the Sustainabiliteens are not fans of the Trans Mountain pipeline expansion.

“We’re targeting the federal government primarily,” said Johnson, “but we’re also calling on John Horgan and the NDP provincial government because they have spoken out against TMX but have not taken any measurable action to oppose it.

“Really all levels of government need to take a stance in the matter, and that is what we’re calling on in this action.”