A proposal from Carrier Sekani Family Services to build a healing and treatment facility for people with substance use issues has the support of Premier John Horgan and the NDP government.

But another government body, the Agricultural Land Commission, has ruled against the proposal — after considering the position of government officials who opposed building it on agricultural land.

“The government didn’t just stand idly by while the ability to build this treatment facility was denied, they actually participated in the process,” she said.

Noting 1,726 people died from overdoses in the province in 2020, Bond said the treatment centre is desperately needed.

Horgan responded that making sure communities have treatment capacity is a top priority, and the government wants to see the facility built. “I’m not aware the project has been stopped,” he said. “I am aware it has not yet begun.”

“The decision fails to uphold your government’s commitments to address the opioid crisis on an urgent basis, to close the systemic gaps in medical and health services for First Nations people in the north, to implement the [Truth and Reconciliation Commission] Calls to Action, and to honour the UN Declaration on the Rights of Indigenous Peoples,” she wrote.

“In effect, the decision denies CSFS the possibility of building the healing/treatment facility on the property,” she wrote. “The property is the only suitable property in the region that meets the criteria necessary for the vision for this urgently needed facility.”

Delay will lead to more Indigenous lives lost, Leween said. “It is unimaginable that this result could be justified by ‘protecting’ a tiny fraction of marginal agricultural land from development on a property that will likely never be farmed.”

The 9.3-hectare property in question is on lakefront close to Vanderhoof and is currently the site of Tachick Lake Lodge. There is an existing 185-metre-square lodge, 10 cabins and 33 campsites that the land commission says predate the 1972 creation of the Agricultural Land Reserve and are therefore allowed as long as they remain in use.

The Carrier Sekani Family Services proposal is for a 2,733-metre-square facility that would have space for 60 treatment beds. It also includes a 400-metre-square parking lot.

Leween said the proposal has the support of the First Nations Health Authority and Indigenous Services Canada.

It also received approval in October from the Regional District of Bulkley-Nechako Board, which voted to forward it to the land commission, saying it believed the overall impact on agriculture would be minimal.

The land commission’s decision, dated Feb. 26, said that despite the social value of the project, its mandate is to protect farm land and to encourage that it be used for farming.

Neighbouring properties are actively farmed and the Tachick Lodge property could be as well if it were no longer used as a resort, it said. “In contrast, the panel finds that the proposed 2,323 [metre square] building and 400 [metre square] parking lot would be less likely to be converted for agricultural use and therefore represent a more permanent non-farm use than the existing grandfathered use.”

The land commission said the Carrier Sekani Family Services had provided a table that looked at nine other potential sites.

“In summary, Tachick Lake Resort was chosen over all other potential sites because of the quality of water access and natural setting, existing infrastructure, certainty and timeliness that comes with developing on private (as opposed to reserve) land, and accessibility for staff.”

Many of the reasons Carrier Sekani Family Services preferred the Tachick Lake site were economic, the Agricultural Land Commission said, but the legislation governing the land reserve doesn’t allow it to take that into consideration.

There are other places the facility could be built, even if they aren’t Carrier Sekani Family Services’ preferred site, it said.

Allowing the non-farm use could make other farmland more expensive, the land commission said.

“The panel confirmed that land values in the ALR tend to be lower than similar land outside of the ALR, because of the restrictions on uses,” it said. “Permitting this proposal, and similar non-farm uses, would have the effect of increasing the value of agricultural properties generally and would not encourage the use of the property for farming should the resort use cease.”

Among the factors the land commission considered, as Bond noted in the legislature, was that staff from the Agriculture Ministry had opposed the proposal when it came in front of the regional district board.

Concerns from the government officials included “Potential conflicts between the proposal and surrounding farming uses (including noise, dust or odours), which may not always be in accord with the pursuit of a tranquil setting and may become a source of frustration.”

It quoted them saying “Non-agricultural uses typically have an option to be located outside of the ALR or an existing farming area, while farms typically don’t. Long-term access to land in the ALR for farming is in the interest of agriculture and food security.”

In her letter to the cabinet ministers, Leween criticized the land commission’s decision that the facility could only use the existing structures and not build anything new.

“It is absurd to suggest that a modern medical residential treatment facility could operate in a lodge and cabins designed for recreational use,” she wrote.

The Tyee asked for an interview with Agriculture Minister Popham, or a comment. It was unanswered by publication time.

In the legislature, Horgan and Malcolmson, the mental health and addictions minister, responded to questions.

Malcolmson said the opioid crisis is a tragedy and it’s an embarrassment that it has hit First Nations disproportionately. The government is working with First Nations to provide more treatment, and the Carrier Sekani Family Services proposal was one it was counting on, she said. 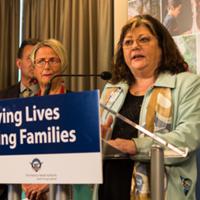 Malcolmson said she’d met with Leween. “I expressed to her I share absolutely her disappointment that the Agricultural Land Commission, an independent body, had rejected the non-farm use on ALR land of the use that was proposed,” she said.

Malcolmson said the government’s investment in the project continues and she’s working with her colleagues in cabinet to pursue it further.

Ellis Ross, the MLA for Skeena, said the time for working together on the details of the proposal have already passed.

“We’ve got a specific proposal asking for the NDP government to get out of the way and stop blocking this project,” he said. “Where’s the common sense in this decision? I just don’t get it.”