Stretching across northwest B.C. lies a 663-kilometre scar on the landscape, an ill-fated infrastructure project that governments sunk millions into before pulling the pin in the late 1970s.

During a brief three-year stint in office in the midst of a 40-year Social Credit Party reign, the NDP had the power to stop it.

More than 40 years later, the disintegrating remains of a planned rail line built on promises of economic prosperity have been described as B.C.’s greatest environmental disaster, creating a barrier to salmon at one end and an open door to overhunting and industry at the other.

The dream of opening the province’s north to rail transport dates back to the 19th century, with visions of connecting Alaska to the Lower 48 U.S. states and B.C.’s resources to international markets. The province’s 25th premier, the infrastructure hungry W.A.C. Bennett, tried to turn those dreams into reality after taking power in 1952. The province had owned a railway since 1918, but Bennett launched a major expansion, extending it northeast from Prince George to Dawson Creek and Fort St. John in the Peace River district, and south to North Vancouver, then to northern communities including Fort St. James.

Then the premier — known, generally fondly, as Wacky Bennett — in 1969 launched his biggest rail venture, setting out to build a new line to Dease Lake, a community of a few hundred people a couple of hours from the Yukon border.

The hope was that the rail line would open the region to resource development.

Work pressed ahead to clear hundreds of kilometres and level a path from Fort St. James to Dease Lake.

But only a few miles of track had been laid when Dave Barrett’s NDP government took power in 1972. It commissioned a feasibility report that showed the original budgeted cost of $69 million — about $497 million in today’s dollars — had ballooned to about $720 million in current dollars.

The report suggested the province proceed, based on a promised grant from the federal government.

By three years later, the estimated cost had more than doubled to $232 million — about $1.7 billion in today’s dollars. The cost overruns were blamed on a lack of engineering studies, newly-raised ecological concerns, design changes and Crown corporation BC Rail’s misrepresentation of the task’s magnitude.

It was an era of dawning environmental awareness. Dave Bustard, fresh out of a master’s program at the University of British Columbia, was hired in 1974 as the Skeena Region’s first habitat protection biologist. He was tasked with overseeing the rail project’s risks and impacts.

“I used to go and spend a couple days up there and I’d come back and I’d be literally in tears, it was such a mess. You could see the desecration of these beautiful valleys,” Bustard says.

Throughout construction, the railway was embroiled in conflicts and court proceedings with its contractors. Among them was Bob Keen, described in the 1973 National Film Board documentary Catskinner Keen as “one tough little bugger.”

The film’s narrator laments the toll taken by the project.

“Guardians of the environment, like fisheries experts, look on the big outfits with misgiving. Keen obeys the rules, but figures, if you want people, you’re bound to lose a few fish.”

Keen, from a rapidly disappearing era when the goal was to open up the North at all costs, viewed educated city types like Bustard as getting in the way of the job.

On April 5, 1977, the province announced a pause in rail grade construction as a royal commission evaluated the line. In a submission to the investigation, Bustard and a colleague described the rail grade as an open wound on the landscape, with exposed slopes slumping into waterways, and clogging spawning beds and failing drainage structures that blocked fish migration.

The commission’s report, released in 1978, called the rail grade “an unplanned, reckless, astonishingly naive, in the end utterly disastrous mistake,” and put the new estimate for completion at more than $350 million — $2.3 billion in today’s dollars and five times original estimates.

By the end of 1976, BC Rail had invested $191 million into the Dease Lake Extension, according to a report to the royal commission. At least another $160 million was needed to complete the line.

The project was finally killed by Bill Bennett’s Social Credit government, which had returned to power in December 1975.

The province’s Fish and Wildlife Branch pleaded for a surgical approach to heal the wounds inflicted on the environment. It called for remediation of the grade by removing drainage structures, revegetating, stabilizing banks and recontouring the landscape. Its final request was the immediate removal of a bridge over the Klappan River that facilitated vehicle traffic from Highway 37 into the culturally important and ecologically rich Spatsizi Plateau.

“We submit that healing can only occur when the victim is given competent surgery and good post-operative care,” Fish and Wildlife’s submission to the royal commission reads. “A patient who simply remains on the table with the incision still open and bleeding profusely has little chance for ultimate survival.”

But that kind of remediation never happened.

Despite recommendations from the Fish and Wildlife Branch and the Environment Ministry to close access to the rail route, the province has granted permits to industry, leading to a 2005 standoff between Royal Dutch Shell and the Tahltan, who opposed drilling in the Klappan, which became known as the Sacred Headwaters.

But while the province has declined to decommission the grade, it has not committed to its upkeep either. 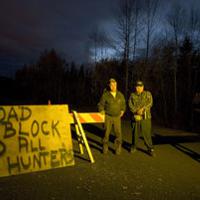 Tahltan in Standoff with Province over Hunting Rules

Shell did the last significant upgrades on the rail grade, investing $8 million in 2006. Since then, a local Tahltan community has done nominal work in an effort to maintain access to traditional hunting camps. Several years ago, the Iskut First Nation added a gate in an effort to control access to the area.

Shannon McPhail, executive director with Skeena Watershed Conservation Coalition, calls the rail grade “one of the biggest environmental liabilities in British Columbia.” She calls for its restoration, something she says could provide green jobs while healing the environment.

That, she says, is what the NDP was elected on.

“Make it a mountain biking trail, a hiking trail, a horse packing trail. Green it up. Replant it. Get rid of all the shit that’s causing the harm,” she says. “Having access to the Sacred Headwaters up this trail, that would be huge. That would be a destination.”