When Anthonia Ogundele was looking for after-school programs for her 11-year-old daughter in 2019, she was frustrated by the lack of options. Particularly when it came to science, technology, engineering and math, or STEM, programs.

“Innovation in STEM is often reserved to gifted, enrichment-type kids or programs, streams and mini-schools,” she said.

“And if you don’t have access, you end up missing out on really great project-based learning, or competitions, or even just the basic tools and equipment to be able to innovate within that space.”

Access to current STEM after-school programs can be limited by an inability to afford program fees, but also by class, race and who you know.

While school districts in British Columbia only track students by race if they identify as Indigenous, a report on the Toronto District School Board in 2017 found Black students were more likely to be streamed into non-academic courses.

According to the York University study, only 53 per cent of Black students, compared to 81 per cent of white, were enrolled in academic courses, including the STEM fields.

But not because of a lack of interest in higher education: according to Statistics Canada, as of last month Black people ages 25 to 54 were more likely than white people to hold a bachelor’s degree or higher.

When Ogundele, who is Black, spoke to other parents about after-school program options, she found she wasn’t alone in her struggle. She wondered: what would a program look like that provided access for all young people, but especially Black youth, to technology and STEM skills and addressed needs like belonging and self-worth?

From that wondering came Ethọ́s Lab, a non-profit, after-school science, technology, engineering and math academy that centres “the humanity of the Black experience” for youth ages 13 to 18.

“We exist to transform community and shift culture. And we do that by providing these tools, equipment, networks and opportunities to support young people in their personal development and growth.”

For example, a four-week session on 3D modelling exposed young people to 3D technology and skills. The session had young people design housing specifically for Hogan’s Alley, the Black community in Vancouver that was razed in 1970 to make way for the Georgia Viaducts.

“We would talk about monuments, and what it means to create or build things that have meaning and place. That’s how we contextualize it.”

The name Ethọ́s Lab originates from an essay Ogundele was planning to write about “reimagining the Black ethos” or guiding beliefs. Considering a new way of being for the Black community, after hearing someone else say what unites them is their shared oppression.

“And I responded, ‘that then necessitates white supremacy for unity’” said Ogundele.

“I asked myself, ‘Well, what are the things that bring us together and are unique to the community? Our Ethọ́s: joy, empathy, radical love, culture shifters.’”

The essay never happened but the name — and the desire to do something different to bring the Black community together — stuck.

Launched a year ago, Ethọ́s Lab had a rocky beginning as plans for a March Break camp were scrapped by the pandemic. They quickly pivoted online, beginning with a three-day “virtual hackathon” in collaboration with Microsoft and Urbanarium at the end of April.

Ethọ́s Lab has now hosted at least 55 workshops reaching more than 100 young people. While the lab is open to all youth ages 13 to 18, the majority of participants identify as Black.

Korinne Tsang’s first introduction to Ethọ́s Lab was a screen-printing session last summer. The 16-year-old student was a bit reluctant to participate at first due to shyness, but she eventually decided to give it a try.

“One of the interesting things is we look at the bias in every part of technology, where I may try to go make an avatar in a video game. And you can’t always make one that looks like yourself because we don’t have those features, and figuring out how to change that,” said Tsang, who is of Chinese and European descent.

While she enjoyed science and learned some coding in school before Ethọ́s Lab, Tsang has enjoyed her experience with STEM far more at the after-school academy.

“I think no matter what you do, it’s going to be a part of the future in any job,” said Tsang of STEM, adding she’s considering a career in digital design.

“Even if you don’t think you want to go into a job necessarily in that field, it’s really important to understand what it is. And just get to know it.”

Tsang’s mother, Karen Tsang, is impressed by Ethọ́s Lab’s dedication to anti-racism education and “centring the people most harmed” by focusing on the Black experience and what it’s like to be left out of society.

“Because the people who are guiding this have been left out, they care about being left out,” said Karen, who is white.

“So it’s not so much a manufactured conversation that is theoretical, in a classroom where some of us feel bad for other people. It’s actually more proactive and almost like a positive conversation.”

But in June, Ethọ́s Lab will introduce a monthly subscription fee. Ogundele says it could be anywhere from $50 to $200 per month, with options for low-income discounts.

“It’s a non-profit organization. We just want to make sure that we have a sustainable model,” she said, adding that early-bird registrants will get a discount.

In addition, Ethọ́s Lab will move into its first physical space in September and is trying to raise $100,000 through its Black Futures Month fundraiser, named after the theme of this year’s Black History Month. So far, the campaign has raised $11,000.

Their next event will be the Black Futures Month Youth Celebration Friday at 5:30 p.m., featuring performances by hip-hop and R&B artists like D.O. Gibson, Mama Rude Gyal and Kia Kadiri, as well as STEM-related games and puzzles. The event is only open to youth between 13 and 18.

Like most pandemic-era celebrations, the event will take place online. But unlike most online events, the Black Futures Month Youth Celebration will take place entirely in Ethọ́s Lab’s virtual reality space, Atlanthos, the first Black-led VR space in Canada. 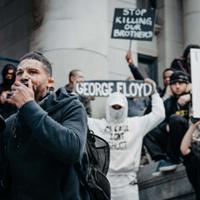 Launched last September, Atlanthos was inspired by young people at last spring’s hackathon who were asked, “What might it look like to create a digital community?”

“They all came up with different concepts that actually resembled creating a world,” said Ogundele, adding that the lab partnered with local startup Active Replica to create the online world.

Even when workshops are not in session, Ethọ́s Lab has created a strong social community among its young participants, something that’s difficult to achieve during a global pandemic.

“We have a group chat where anytime you want someone to talk to you, you can just go on and talk about anything. Or if you want to play a video game with other people, you can just put out a message and people will reply,” said Korinne Tsang.

“It’s just such a lovely community that I’m really happy to be a part of.”