Less than four years ago, inside an industrial warehouse on East Vancouver’s streets of Powell and Victoria, Aaron Quesnel was living his microgreen dreams. Under stacks and stacks of towering shelves, amid the hums and florescent hues of grow lights, Quesnel and his farm staff spent their days tending to the seeds and sprouts of baby vegetables before hopping on their bicycles to deliver fresh harvests in recycled packaging. His operation, Sky Harvest, had gained a reputation amongst a loyal base of 60 restaurants and local retailers as a choice producer of nearly 20 different microgreen varieties.

But Quesnel, who started Sky Harvest in 2011, eventually found himself tangled in a paradox: the very same city that had been his launch pad into local food fame became the catalyst for his departure six years later.

“We were very much the type of green business the city wanted to promote, trying to do everything sustainably,” Quesnel said, adding that Sky Harvest was close to achieving zero waste standards. “But trying to stay without success, keep my livelihood and my only source of income, took a year of my life and a lot of time and energy and emotion.”

City documents state that the purpose of the bylaws was to legitimize urban farming and create a regulatory process to help farmers secure land lease tenure and insurance and pursue long-term business plans.

For Quesnel, the measures initially seemed like a signal of support for urban agriculture in Vancouver. When he attempted to obtain a business licence, however, he was confronted by a time-intensive process that involved a number of bureaucratic hoops and little direction from the city departments on how to move forward.

Quesnel said he encountered a never-ending list of development permit requirements that involved contracting structural engineers, lawyers, architects and environmental consultants in order to meet building codes that brick-and-mortar structures like restaurants or offices would be subjected to.

“As a small farm, I wasn’t in a position to navigate [the process],” he said. “So it was either we go into an unknown amount of debt and try and jump through these hoops or go somewhere else.”

In November 2017, Quesnel moved his farm to Richmond, B.C., where it still exists today. Richmond’s process for acquiring a business licence was quick and clearly laid out, he said, taking him about two months. City staff visited his site at his request and reviewed his documents before he formally submitted them. Unlike the site modifications Quesnel would have been required to make in Vancouver, the ones he needed to make to satisfy building codes in Richmond, he said, were straightforward and seemed “pretty standard.”

Quesnel’s situation is not unique. A census report released by the Vancouver Urban Farming Society last week illustrates the decline of urban farms, highlighting the “tedious, time-intensive, and unclear” process of applying for a business licence as a primary factor. It also recognizes that costs imposed by regulations are not feasible, as urban farms operate on low profit margins.

Report data states the city went from 15 farms in 2013 to nine in 2019. VUFS has since updated the current number of farms at eight, after another shut its doors last year. The tally stands in stark contrast to the goals laid out in Vancouver’s Greenest City Action Plan, which aimed to reach 35 urban farms by 2020. Proponents of urban agriculture say that if regulations remain in place, the city will continue drifting farther away from its initial goal.

Karen Ageson, a farmer at Farmers on 57th, acting executive director of the VUFS and an author of the report, believes the root of the problem is policy makers’ unfamiliarity with how food is grown.

“As a sector we are struggling, and residents have not been able to realize all the benefits of local agriculture because we’ve been blocked,” Ageson said. “If the city wants urban farming in the city, like six of our city strategies say they do, they need to learn about farming and how it could be better integrated into the fabric of the city.”

VUFS has proposed eight policy changes to the city. Specific to the process of obtaining a licence, it asks the city to eliminate the development permit requirement or provide an alternative. It recommends and explains how to build bylaws that are specific and appropriate to farm infrastructure. It also outlines approaches the city can take to clarify and simplify the business licence application process.

When farming bylaws were initially implemented in a pilot program, they were required to be reviewed after two years. But the municipal election and COVID-19 have delayed the process. In a written statement, Mary-Clare Zak, the city’s managing director of social policy, said city staff will be engaging with VUFS and farmers this spring and that they hope to present recommended bylaw amendments to council later this year.

“The VUFS report summarizes many of the concerns staff have heard directly from farmers,” she continued. “Urban farming policy evaluation is underway, and city staff are considering VUFS policy recommendations to address many of these issues.”

Michael Ableman, co-founder of Sole Food Street Farms, said he received high-level support from the city when he founded his farm in 2009, but found that it later got lost in bureaucracy.

Prior to the urban farming bylaw implementation, Ableman said he obtained a business licence because his farm was “too big to go unnoticed.” He was also told that because a portion of his farm was on city land, he required permits.

In March 2016, Ableman gave feedback to council on this process, saying he spent more than $100,000 over a four- to five-year span to satisfy obligations around development permits for his farm sites.

Some requirements, he added, echoing VUFS’s report, seemed unnecessary. He was asked, for example, to ensure he had a fire exit for his tunnel houses — unheated greenhouse-like structures that consist of steel-frames draped in relatively thin sheets of plastic.

“We demonstrated the fire exit: you put your hands through the plastic and walk out,” he said. “Vancouver claims to be a leader in urban agriculture in its public documents but makes it nearly impossible for urban agriculture to function.”

Last year, when he consolidated his four farm sites to a new location at the request of the city, in order to conform to current urban farming guidelines, Ableman said the cost ran to $245,000. This included $70,000 to install concrete lock blocks along the perimeter of his four tunnel houses as a safety measure.

“I’ve been growing in tunnel houses for my entire career, 43 years,” Ableman said. “I’ve never seen one blow away.” 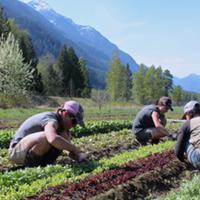 Sole Food Street Farms did receive city funding to cover about 75 per cent of the costs associated with the move, but Ableman said the installation of the concrete blocks affected the length of his growing season, resulting in an estimated loss of $30,000 to $45,000 in production of nightshade crops.

For some, like Quesnel, Vancouver’s bureaucratic hiccups have meant the closure of their farms in the city.

Others are more optimistic. Despite the hurdles he faced, Ableman is hopeful about the future of his industry. Like VUFS, he would like to see the city collaborate and utilize the knowledge of farmers who are on the ground, doing the work.

“The fact is, we all need to eat, but more people need to care about climate change, soil degradation and how food is grown,” Ageson said. “Us small-scale farmers trying to do things sustainably here in the city, we want to help transform people’s mindsets around food and how they interact with the world around them.”

Disclosure: Karen Ageson of VUFS is the sister of Tyee publisher Jeanette Ageson.