In Nohtikwewpisim’s culture, red is the only colour a spirit recognizes. So for the annual Women’s Memorial March in Vancouver Sunday, she and other women made dozens of red ribbon skirts to gift to participants.

“It was my hope that for this day, this ceremonial march, that loved ones that are lost will recognize the red and come and march with us,” Nohtikwewpisim told The Tyee.

This is the 30th year Indigenous families and supporters have gathered in the Downtown Eastside to remember the women and girls who have died or gone missing.

“We are marching until the violence against women ends,” said one organizer before the march got under way. “It still continues.”

The march comes after a particularly deadly year for women in the Downtown Eastside. Organizer Myrna Cranmer told The Tyee she had a list of 50 women who had died in the past year.

The memorial march has always drawn attention to the disproportionate numbers of missing and murdered Indigenous women, and organizers say it was more important than ever to hold the march this year.

The COVID-19 pandemic has exposed deadly inequalities across Canadian society, with violence against women, fatal overdoses and racist incidents all increasing. And there has been new attention on the issue of systemic racism against Indigenous people in the B.C. health-care system.

“Because of COVID, there are higher rates of racism, discrimination and violence,” said Sinktesapatawiya, a march organizer from Treaty 6 territory in Alberta.

Sinktesapatawiya said she believes there has been a “huge breakdown in community,” especially in the Downtown Eastside. She said she was particularly disturbed by media reports of the apparent daytime sexual assault of a semi-conscious woman on the sidewalk on East Hastings Street, with no one intervening.

Sheila Poorman and her daughter Paige Kiernan were marching with posters that showed photographs of Poorman’s daughter, Chelsea Poorman. Chelsea lived in the Downtown Eastside and was last seen in the first week of September. Poorman has been searching for her ever since.

“We’re here to support the other families who also have loved ones missing or have passed on,” said Poorman, who is from the Kawacatoose First Nation in Saskatchewan.

Nohtikwewpisim, who is from the community of Maskwacis in central Alberta, says participating in the memorial march was a pivotal moment for her, reconnecting her with the culture and ceremony that had been missing from her life. 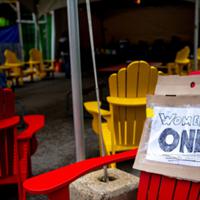 Groups Warn of Increased Violence against Women in the Downtown Eastside

“When I first heard the march and the singing, the women and the drumming, it reminded me of where I came from, the culture I used to have, before day school, before I ended up in foster care in Calgary,” she said. “A lot of that culture and ceremony was dormant in my life.”

When Nohtikwewpisim was homeless in the Downtown Eastside, she experienced the violence many women face. “I escaped with my life a couple of times,” she said.

Several women took care of her during those years on the street, but she doesn’t know where they are today. During the march she was also thinking about a close friend who was recently murdered, and Billie Johnson, a woman from Edmonton who has been missing since December.

“When I went back home to Maskwacis and started taking part in ceremony, I was gifted a ribbon skirt because I was healing, and to identify myself in the spiritual realm as a life-giver,” she said.

“To honour ourselves as Indigenous women and life-givers, we wear skirts in ceremony — ribbon skirts.”

Other women worked with Nohtikwewpisim to make the 112 skirts that were gifted to women on Sunday.

“It’s always such a healing experience for the women. They come, they feel connected, they share whatever’s in their heart at the time,” she said.

“But it’s also to make a statement to Canada that there is a genocide happening in this country and we’re not invisible. It’s not acceptable and it won’t be ignored anymore.”