It’s been used for a tent city twice, a community garden, a street market and informal overdose prevention site, and for an emergency medical unit during the early days of Vancouver’s overdose crisis.

Now construction of badly-needed social housing for the Downtown Eastside, promised in 2016, is set to start at 58 W. Hastings St.

The lot has a long history of housing protests. It was a tent city during the 2010 Olympics and again in 2016 as housing prices and rents spiked and homelessness numbers rose. The 2016 tent city lasted from July to November.

In August 2016, then-mayor Gregor Robertson met with community members and agreed to bring a rezoning proposal for the site to city council, promising 100-per-cent social housing on the lot.

Karen Ward, one of the community activists who met with Robertson, now works for the city as a drug policy advisor. Fundraising for the project and getting the province and federal government on board took a long time, Ward said, but she’s happy to see the project finally break ground.

“We definitely need a new way to do this because the supportive housing thing is just not working great,” Ward said, referring to increasing death rates in many supportive housing buildings and friction between tenants and housing providers over visitor restrictions.

After Robertson signed the agreement with Downtown Eastside community members, the Chinatown Foundation signed on to develop a 10-storey building with 230 housing units and a health-care centre run by Vancouver Coastal Health. The Chinatown Foundation also fundraised $30 million for the building, and the provincial and federal governments will fund the rest of the $115-million project.

Robertson originally promised that all the housing units in the building would be rented at rates affordable to people on welfare or pensions.

The current plan is to rent 117 of the apartments at the income assistance shelter rate of $375 a month, while the other 113 are to be rented at rates considered affordable for people making no more than $55,500 for a one-bedroom and no more than $67,500 for a two-bedroom unit.

Some activists have protested the plan in the past because not all the units will be rented at the welfare shelter rate.

But Ward defended the project, saying the non-shelter rate units will provide housing for people with low incomes who still can’t afford to rent in the private market.

“People will qualify for this housing if they make minimum wage, or [work] part-time,” Ward said. 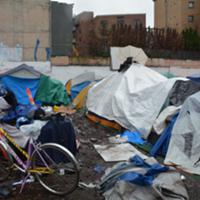 In Vancouver, Another Tent City Is Dismantled

Construction will displace the Downtown Eastside Street Market, which has been located at the site for a year, and an informal outdoor overdose prevention site that operates beside the market.

Vendors were initially told they had to be out by the end of January, but that deadline has been extended to Feb. 28 while the city looks for an alternate spot for the market.

Sarah Blyth, a founder of the Overdose Prevention Society, said she was relieved to hear the deadline had been extended because the market provides a vital source of extra income for people who live in the neighbourhood.

“Obviously, we don’t want to fight housing,” Blyth said. “But there should be an alternate location if you’re going to ask people to leave.”