Downtown Smithers, where Highway 16 meets Main Street, is empty at 2 a.m. this morning, save for the odd shift worker driving to the mill or an empty logging truck embarking on an early start. Even the local dance bar, which would usually be depositing revellers onto the street about now, is quiet due to the pandemic.

But for a moment, that briefly changed. BC Hydro is using the early morning to move the first of two giant turbine runners from the Port of Prince Rupert to the Site C project site north of Chetwynd this week.

The runners, the rotating parts of the turbines that convert falling water into energy, are the single largest pieces of equipment for the hydroelectric project currently under construction.

And I’ve been waiting for two hours in freezing temperatures to take a photo of the equipment passing through Smithers. Like the rest of the project, the equipment is behind schedule.

The task of moving the mega-load is immense.

On Sunday evening, the first turbine runner left Prince Rupert after dark, travelling at speeds averaging 40 kilometres an hour — a pace that will get it to the dam site, 1,000 kilometres away, by early Friday.

The runner is about eight metres in diameter — wider than two highway lanes — and five metres high. It’s riding on a trailer the length of six city buses and pushed from behind by two trucks that work with the lead rig. A half dozen pilot and traffic-control vehicles hopscotch their way along these darkened two-lane highways to block other traffic.

Northerners have been warned to expect traffic delays as the 170-tonne behemoth lumbers across the province, even though most will be sleeping as the procession passes by. The entire process will be repeated when a second turbine moves through next month.

Yet even as this effort is underway, a report that could determine the dam’s future sits with B.C.’s energy minister, Bruce Ralston, who received it in late December and says he will soon present its findings to cabinet. That could happen as early as Wednesday.*

The report is the result of a review of the troubled project by former deputy finance minister Peter Milburn, who was tasked with examining delays, rising costs and risks due to geotechnical issues. Milburn’s appointment followed the release of BC Hydro reports in July that predicted untold cost overruns and delays. 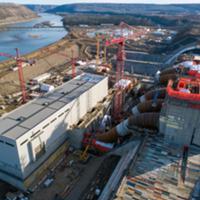 Started under the previous Liberal government, the hydroelectric dam was originally expected to cost $6.6 billion. That rose to more than $10.7 billion by last year, and some experts, including the independent BC Utilities Commission, have estimated it will take more than $12 billion to complete.

The flashing “PREPARE TO SLOW” beacon that passes through Smithers at 4 a.m. could be seen as a warning about the dam as much as it is about the giant truck convoy.

The turbine runner currently travelling through the north is one of two that began their journey from São Paulo, Brazil, in October and arrived in Prince Rupert in early December. The second runner will make its northern tour in February while four additional runners are expected to leave São Paulo later this year.

The Ministry of Energy, Mines and Low-Carbon Innovation did not respond to The Tyee’s questions by deadline. An email to the minister’s office went unanswered.

*Story updated on Jan. 13 at 1:44 p.m. to correct the date the Milburn report was presented to government.