Kenny Sam admits that he’s one of the lucky ones.

“I get the chills, and that’s the roughest part, I think,” he says from his home at Nak’azdli Whut’en First Nation. “I couldn’t warm up.”

Sam is one of about 40 active COVID-19 cases announced Thursday by the Northern Health Authority in the area around Fort St. James and Nak’azdli Whut’en, communities 115 kilometres northwest of Prince George. Other than an occasional cough, the 67-year-old says he’s feeling “off and on, up and down,” but generally on the mend.

According to public health officer Dr. Bonnie Henry, the cases are not considered an outbreak.

Sam was likely exposed to the virus while playing cards at the Key, a local resource centre in neighbouring Fort St. James, nearly two weeks ago. He tested positive about a week later. Although the source of the virus in the community is unclear, the Key has been identified as a significant contributor to its spread.

On Dec. 1, Northern Health issued a public exposure alert for the facility over a two-week period in November. During the same period, it reported public exposures at the Fort St. James cold weather shelter, as well as the local secondary school and two elementary schools.

Fort St. James and surrounding First Nations have a combined population of about 5,000 people.

On Wednesday, BC Emergency Health Services tweeted that its Major Incident Rapid Response Team had been deployed to Fort St. James to support local paramedics as cases spiked.

The following day, Northern Health addressed what it called “a recent surge” in COVID-19 across the region, including approximately 40 active cases in Indigenous and non-Indigenous communities in the Omineca Region, which includes Fort St. James.

“We are grateful for the BC EHS support to manage patient transport needs in the area,” the health authority said in a news release Thursday.

Fred Sam, a local band councillor and former chief, says his brother was among those transported from Vanderhoof to Prince George hospital this week as his health deteriorated. He says the rise in cases is the first since the community got a previous cluster under control in September.

On Thursday, there were no recent reported deaths in the community. However, a Nak’azdli Whut’en Elder with underlying health conditions died with the virus in September.

“It was gone,” Sam says about COVID-19 in his community. “Then it came back maybe a few weeks ago.”

He speculates that the virus may have entered the community through visitors or local residents taking shopping trips to Prince George. He also notes that residents travel to Coastal GasLink work camps in Vanderhoof and Burns Lake, both of which are rumoured to have had positive cases. Coastal GasLink reported a cluster of nine cases in its workforce Thursday, but would not specify their location along the 670-kilometre pipeline route, citing privacy concerns. The health authority doesn’t release information on cases in specific locations like work camps.

Witset, a Wet’suwet’en community three hours to the west, has seen a rise in cases due to camp workers returning to the community after testing positive.

Anne Ketlo lives in Nadleh Whut’en First Nation, an hour from Nak’azdli. Many of her Nak’azdli family have contracted the virus, including her cousin, Kenny Sam. They aren’t all faring as well: another cousin has been in an induced coma for two weeks, she says.

She said the majority of the occupied beds in the Prince George hospital are being used for patients from Nak’azdli and there’s only a limited number of ventilators.

“From my understanding, they are sending patients to the Lower Mainland or the Island,” she says. “Because there’s no more beds available.” The government has confirmed patients are being sent outside the region as a result of the surge in cases.

Ketlo said that neighbouring First Nations have closed the roads into their communities. Nak’azdli also announced Wednesday that the community would shut down for two weeks, possibly longer.

“Right now, we’re just kind of sitting ducks,” Ketlo says. “I know how serious it is, because I’m directly affected because of my family in Nak’azdli.” 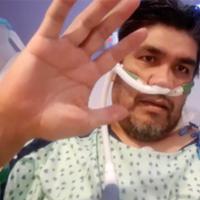 In an emailed statement, Nak’azdli Chief Aileen Prince said community members are worried and the nation is working hard to get cases under control.

“We have asked Nak’azdli to shut down for the next two weeks and our school has closed to regular classes,” she said.

“Our community is worried about loved ones in the hospitals and in isolation. We are asking people not to come into the community unless essential and for people to not visit outside the home bubble. We have a strong community and people are standing together in these unprecedented times.”

More than a week into the illness, Kenny Sam, who lives alone, says he’s well enough to look after himself and that the local health unit delivers daily lunches and dinners, including soups, sandwiches and fresh bannock.

In the northern community on the shores of Stuart Lake, he looks forward to getting back outside.