Long-term care and assisted living facilities in B.C. are facing an increasingly deadly second wave of COVID-19 outbreaks, while at the same time imposing restrictions that leave seniors increasingly isolated.

And the province’s seniors’ advocate Isobel Mackenzie says the government needs to overhaul the measures put in place in the pandemic’s early weeks and ease restrictions on visitors that are depriving residents of essential care and time with loved ones, and which could be costing more lives than they are saving.

Mackenzie said this will be the last holiday season for about a quarter of residents, and the province needs to do everything in its power to support meaningful connection between residents and their families.

“I don’t think it was ever intended that these measures would be in place for as long as they have been. I think it was intended to give care operators the opportunity to figure out how to manage these visits,” she said. “And we just got stuck in how we started out the visits in July, with how we’re doing the visits now, in December. We just need to shift that.”

COVID-19 case numbers and deaths, the majority of which have been long-term care residents, have risen to unprecedented levels. About 35 people in long-term care died of the disease last weekend alone.

B.C. introduced policies to limit the number and frequency of visitors quickly in the spring, also requiring staff to work at a single site to prevent spread between facilities.

Each resident could have one 30-minute essential care visit per week. About half the people who applied to be designated as essential were rejected.

The restrictions worked, quelling outbreaks that resulted in lower care-home deaths than in Ontario and Quebec.

In June, B.C. announced each resident could have a designated social visitor as well, an expansion that rolled out slowly and inconsistently across the province.

But after 10 months, the restrictions have devastated the physical and mental health of residents and failed to prevent outbreaks as community cases increase.

There are now 54 active outbreaks in B.C.’s long-term care and assisted living facilities.

“The challenge that we are facing right now, is that this surge in our communities has dramatically increased the risk in long-term care,” said provincial health officer Dr. Bonnie Henry on Wednesday.

But earlier in the week Henry noted visitors are not causing outbreaks, which are more often caused by staff unknowingly spreading the virus.

Mackenzie said health officials should allow more frequent and longer visits with the current designated visitors rather than increase the number of visitors per resident.

When asked by The Tyee, Henry said the province is working to maintain and extend the current visitation level allowing one designated visitor. “But expanding to allow more social visits is not going to happen during this risky period right now,” she said

Henry did not say when current visitors might be allowed to see loved ones more frequently.

“I understand the reluctance,” said Mackenzie, who used to run care homes before being appointed B.C. seniors advocate by the government. “But increasing the frequency of visits, allowing their visits to happen in the privacy of the residence room, that’s not going to significantly increase the risk at all, and arguably could be decreasing the risk, because the care home is going to be able to rely on those family members to provide some help.”

Current protocols that require visits occur in common areas also put strain on already overworked care workers and nurses by requiring them to transport residents from their rooms for visits.

Visitors also need to be screened and escorted to the space, rather than finding their way to the residents’ rooms.

And experts say the increased workload around visits and decreased family support has shed further light on the overworked and fragmented sector, where many care workers don’t have paid time off, sick days or health benefits.

“Everything has changed, but nothing has changed,” said Joanie Sims-Gould, an expert in seniors’ health at the department of family practice at the University of British Columbia’s faculty of medicine. “But everything’s changed in the wrong direction.”

Research co-conducted by Farinaz Havaei at UBC’s school of nursing found that during the pandemic’s first wave residents’ direct nursing care plummeted by about 10 hours per month as facilities scrambled to control the virus.

Nurses are responsible for just under 30 patients in an average shift, while care aides look after around 10 patients each shift.

Havaei, who researches human resources in the health-care sector, said the pandemic placed alarming pressure on staff. “I even get goosebumps, because I think... it’s a very stressful context for long-term care staff.”

Registered nurses recorded the largest decline in hours compared to licensed practical nurses. Their hours had already been in slight but steady decline since 2018.

Meanwhile, the relative hours of care performed by care aides is steadily increasing, leading Havaei to ponder how care aides may be replacing nurses in some care situations.

Based on research from her coming report, Havaei says supporting staff with flexible sick leave, paid time off and proper personal protective equipment can improve their lives, which in turn will improve the care residents receive.

“If you think about the mental health implications of all of that (stress), and how that influences staff’s work behaviours and decisions when giving care, you can see that the implications are really huge,” said Havaei. 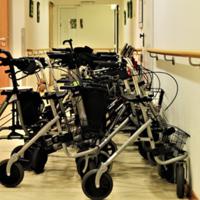 The federal government announced $1 billion in funding for the long-term care sector, and B.C. has committed $44.1 million to hire more than 5,000 new health-care support workers.

“Adequate resources translates directly to safe staffing levels,” added Sims-Gould. “The situation is so grave, and these facilities are doing the best they can.”

Henry would not commit to a timeline when families could see visits expanded, but Mackenzie hopes the right balance will be found and implemented as soon as possible.

“Time is marching on,” she said, noting residents won’t have access to a vaccine until February or March at the earliest.

“Arguably, not only can we [expand visits] now, I think now makes it more important to do it, because the system is under more stress,” said Mackenzie. “And these family members can actually help us, in addition to visiting their loved one, and all of those positive quality-of-life benefits.”