For years, Lauren has battled both substance use and British Columbia’s child welfare system as she attempts to keep her children out of foster care.

“I was really trying to break that cycle for my children,” Lauren, who is Métis, told The Tyee.

Lauren’s first child, a son, was adopted without her consent; she spent three years trying to get access to him, without success.

The child welfare system again got involved when she became pregnant with her second son, and then a daughter. As her children grew, whenever Lauren relapsed and started using drugs again, social workers would get involved and Lauren would fear losing her remaining two children.

In the past, her kids were allowed to stay with family members when she couldn’t care for them. But around a year ago, Lauren’s worst nightmare came true: a relative who was caring for her nine-year-old son asked for respite care and dropped him off at a Ministry of Children and Family Development office.

Suddenly, her son ended up in foster care — a placement that would last three long months.

Instead, Lauren said, the experience left her son traumatized.

“His heart is completely shattered, he’s broken. He can’t put all the pieces back together from foster care.”

The Tyee is using a pseudonym to protect the privacy of Lauren and her children.

Lauren doesn’t currently use drugs. But in the past, the experience of being closely scrutinized by B.C.’s child welfare system led her to avoid using drugs at a safe injection site where she might be spotted.

That’s despite the huge risk of using any illicit drug in B.C. From heroin to meth to cocaine, the entire illicit supply is now tainted with the powerful synthetic opioid fentanyl or other dangerous additives. Overdoses have killed nearly 7,000 people in B.C. since 2016.

“As much as I would have liked to be able to go to a safe place to use my drugs and be monitored to make sure that I was OK, I couldn’t because I was afraid,” Lauren said. Many people with addictions are able to hold down a job and love and parent their children, she added.

"They’re still the same person everyone knew before being labelled and scrutinized by the Ministry of Children and Family Development.”

A new study published by the Centre for Gender and Sexual Health Equity at the University of British Columbia has found that B.C. mothers whose children are “forcibly removed” from their care are 55 per cent more likely to have an overdose.

Among Indigenous women, the experience of losing custody of their child doubled the odds of overdosing. Researchers regularly surveyed over 1,000 marginalized women in Metro Vancouver between 2010 and 2018.

Meaghan Thumath, a nurse and an assistant professor in UBC’s school of nursing, was lead author of the study. She works with women who are often involved with B.C.’s child welfare system. Losing custody of a child is a hugely traumatic event and it can lead women to relapse into more frequent and riskier substance use, she said.

While the research paper looked only at non-fatal overdoses, other research Thumath worked on showed a much grimmer pattern: women who have had a child apprehended have an increased chance of dying after their child has been removed from their care.

“You can’t get your kids back if you’ve passed away,” she said. “And that child has forever lost their parent.”

Thumath is raising the alarm now because the combination of factors that lead women to overdose have only gotten worse since her research concluded in 2018.

Since the beginning of the COVID-19 pandemic, B.C.’s illicit drug supply has become more dangerous and overdose deaths have shot up. COVID-19 also increased trauma. For a few months, in-person visits between parents and children in care were moved online or cancelled entirely.

In June, the Ministry of Children and Family Development released a guide to help service providers “scale up” in-person visits.

Like Lauren, many families have seen generation after generation affected by state policies that tore families apart, from residential schools to the '60s Scoop to the modern foster-care system and are dealing with intergenerational trauma.

Dr. Janine Hardial is a family doctor who works at Sheway, a clinic for women and their children in the Downtown Eastside. Hardial said Thumath’s research matches what she sees her patients go through.

“This is something we have observed for years: a woman who is at very high risk of overdose, in that period after her child or baby is apprehended and removed from her custody,” Hardial said.

“That trauma and loss is catastrophic for some women, and that puts them at a high risk of relapse, especially if they’ve had a period of stability prior to that — their risk of overdose is even higher because of the changes to their opioid tolerance.”

Thumath says that if children do need to be removed from their mother, women need to be offered counselling and wrap-around support to deal with the trauma of that loss. And efforts need to be made to continue visits between parent and child, something that was interrupted by COVID-19 restrictions.

In most parts of B.C., in-person visits are back on, but it’s important they be considered an essential service, Thumath said.

Thumath said it’s important to keep children safe and there is a role for the child welfare system. But she emphasized that the most common reason to remove a child from a parent’s care isn’t abuse, but neglect — which, Thumath said, often just means poverty.

“Neglect is really defined as being homeless, often [living in] poverty or having food security issues,” Thumath said. “It really should be a rarity that poverty is a reason for child removal.”

A woman’s drug use does not automatically mean there is a child protection concern, Hardial said.

In response to questions from The Tyee about Thumath’s study, ministry communications staff wrote that removal is a last resort and only done “if the child is either in immediate danger or no measures are available and adequate to protect the child.”

“In instances where parental substance use is identified as a contributing factor in the removal, the ministry would refer the parent to supports that reduce risk and help them safely reconnect with their child. With supports in place — including counselling, addictions treatment and culturally specific services — nearly 90 per cent of children who are found to be in need of protection are able to return to living safely with their families,” ministry staff wrote.

But Hardial said the kind of support mothers are offered, and how fast that support is extended, often depends on the social worker who is assigned to her. 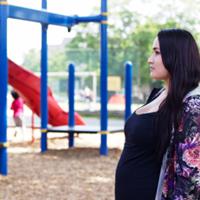 Even if women are not able to parent full time, “we have to be able to be creative and think out of the box and think about how to preserve that relationship and minimize trauma for the mom and the baby,” Hardial said.

That could take the form of frequent visits to maintain the relationship between mother and child.

“We have to do everything we can to support her, to keep contact with the baby or child through visits — and hope for reunification if that mother’s goal is to parent.”

Hardial said it’s common to see teenagers who have come to the Downtown Eastside to search for the mothers they lost contact with as young children. Sometimes, those teens are using substances to deal with their own trauma.

“The loss of a parent, the grief of that, the trauma that inflicts on the child, that doesn’t go away,” Hardial said.