When Ross, a former elected chief councillor of the Haisla Nation, entered provincial politics in 2017, he told The Tyee he had supported developing a liquefied natural gas industry since at least 2005, long before then-premier Christy Clark and the provincial government got on board.

“We have seen that natural gas is the cleanest of all fossil fuels, and that it can improve the global environment by offsetting dirtier fuels in Asia,” Ross wrote.

There is also video of Ross at a 2019 event in Alberta to promote the documentary Over a Barrel, where he appears to question whether there is a scientific consensus on global warming.

“Even the scientists and experts can’t agree what’s really going on, so how are we,” Ross says, before he’s drowned out by audience members yelling “bullshit” and “that’s a lie.”

On Twitter he clarified. “I said if the experts can’t agree, what are we supposed to believe as average citizens. I was going to add that we need impartial and rational discussions about this, but a few people started screaming out obscenities.”

The BC Liberal caucus didn’t respond to a request for an interview with Ross.

Bond said Ross has been clear he believes climate change is real.

“Ellis responded to those comments by being very clear and straightforward about the fact he recognizes the need to deal with climate change,” Bond said. “I think our party’s been very clear on that as well. I certainly have been. We’ve recognized the importance of taking strong and bold action on climate change.”

She said before appointing Ross she’d had a long conversation with him and that he’s passionate about clean air and clean water.

“He recognizes that we need to take bold and decisive action on climate change and he also has spent a lot of time in his role as chief of the Haisla dealing with issues like mitigation, permitting and all of those things.”

Both Ross and the party see the need to balance environmental protection with a strong natural resource sector, she said. “It’s not about the economy or the environment, it’s about both.”

Peter McCartney, climate campaigner for the Wilderness Committee, said “I’m a little surprised that Mr. Ross would be put into environment and climate change critic.”

Ross’s comments on global warming and his long promotion of the fossil fuel industry and LNG suggest the party should have had better options to fill the role, McCartney said.

“It doesn’t exactly inspire confidence,” he said. “I would certainly take it as a signal of the direction the party is planning to head.”

Any climate critic or minister responsible for the issue needs to recognize that addressing climate change means thinking about a world where the fossil fuel industry doesn’t exist, McCartney said.

The NDP government’s support for the LNG Canada project and the gaps in its climate plan should provide opportunities for a critical opposition, he said.

“It certainly appears that the current provincial government is relying on sort of magical thinking around innovation to get to B.C.’s climate targets, and that’s just not acceptable in the position that we’re in where we’ve already missed every target we’ve set.”

Instead, Ross’s appointment suggests the BC Liberals will continue their support for LNG and cozying up to the fossil fuel industry, he said.

Another notable appointment was Renee Merrifield as the health critic, making the rookie Kelowna-Mission MLA responsible for holding the largest ministry to account as the COVID-19 pandemic remains the government’s top priority.

Bond said that Merrifield, a developer and former Interior Health Authority board member, comes to the job with lots of related experience and will be well supported.

“We are going to respond to the COVID crisis in British Columbia in an integrated way,” she said. “I have said to all of the other critics that this will be a cross-critic portfolio in essence dealing with COVID.” 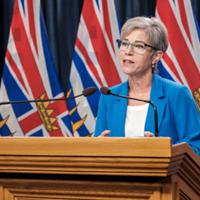