A Hazelton woman who has several family members sick with COVID-19 is warning northerners in British Columbia to remain diligent, despite the region’s relatively low case numbers.

“I’ve heard so many different takes on COVID-19, where a lot of people think that it’s a hoax or it’s fake or I’ve heard the conspiracy theories. This, for us, is a real reality check,” says Pansy Wright-Simms whose brother, Harry, is in an induced coma at Prince George’s University Hospital of Northern B.C. (The Tyee has agreed to withhold Harry’s last name to protect his privacy.)

“There are some that are taking matters really seriously, and then there are others that really aren’t.”

As the province reported 538 new cases Thursday, B.C. public health officer Dr. Bonnie Henry extended more stringent public health orders implemented previously for Fraser Health and Vancouver Coastal to the rest of the province. They include suspending events, including those with fewer than 50 people and gathering only with immediate households. Masks are now required for all indoor retail spaces and shared workplaces.

The news came as Northern Health announced a COVID-19 outbreak at the construction site for the LNG Canada processing plant in Kitimat. According to Northern Health, 14 employees have tested positive, 32 are in self-isolation on-site and an unspecified number are isolating in their home communities.

“Northern Health is working with the BCCDC [BC Centre for Disease Control] to ensure communication with the health authorities or jurisdictions of the affected employees’ home communities,” it said.

Northern B.C.’s COVID-19 numbers have remained relatively low since the pandemic began in March. The Northern Health authority, which encompasses two-thirds of the province’s land base, has seen fewer than 600 cases out of the roughly 25,000 in the province. That’s just over two per cent of cases; the region is home to six per cent of the population.

However, that grew to 121 yesterday.

Last weekend, Northern Health recorded just 14 new cases across the region over a three-day period, less than one per cent of the provincial total. On Tuesday, however, it hit a new milestone when it reported 21 new cases for a 24-hour period, several times the daily average in recent weeks. On Wednesday, 13 new cases were recorded in the North and an additional 11 Thursday.

On Wednesday, all 11 hospitalized patients in the North due to COVID-19 were in intensive care. The region had 17 per cent of ICU cases in the province.

“We don’t like to see anybody in hospital or in ICU, and we really need to start taking these extra measures and take recommendations seriously to make sure we keep our cases low in the community, to keep people out of hospital and out of ICU,” she said Thursday.

Northern Health released an information bulletin earlier this week urging northerners to remain cautious as the virus surges in the south. The authority said it is “concerned with the upward trend and frequency of new cases and clusters in the region.”

“We are encouraging against non-essential travel and are asking people to ensure they are following all of the current orders, guidance and advice,” it said.

Kling said even in the north, it’s important to stay close to home unless absolutely necessary.

“Any essential travel for work, for medical appointments, anything like that is absolutely still important. But other types of travel, we’re just really asking to consider if it’s important to do right now,” she said.

Though COVID-19 numbers may still be low in the North, the impact on affected families can be devastating, Wright-Simms says.

“It is a reality check when it’s somebody that you are close to and love. I mean, do we have to wait until it gets to that point before we wake up and say, this is something that can affect even the strongest person?” she says.

“It’s no joke. Our family is in turmoil right now. We can’t fathom the idea of losing yet another member. And it totally could have been preventable.”

Wright-Simms lost another brother and her grandmother within a few weeks of each other this summer. Neither was related to COVID-19. 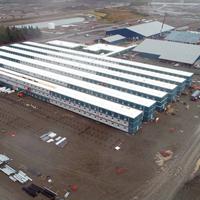 Her brother Harry, who also lives in a small Hazelton community, isn’t sure where he contracted the disease. But he had recently done shopping trips to Prince George, about 400 kilometres southeast of Hazelton, and Smithers.

He started to feel unwell two weeks ago.

“He had gone to the hospital here a few times, and the third time they had told him that he had pneumonia,” Wright-Simms says. He travelled to Prince George to recover with support from his ex-partner and youngest son.

“Little did he know that it was also COVID.”

Last Friday he was admitted to hospital in Prince George. Two days later, he was put in an induced coma. On Wednesday, he remained on life support in intensive care. 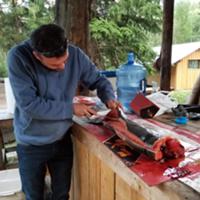 Rediscovering Traditional Ways during a Pandemic

“The update that our family received [Tuesday] night from them was that his condition hadn’t changed. He’s incapacitated on pain medication and his oxygen levels are still very low,” Wright-Simms said.

At 44, she said, her brother was strong and healthy.

Three of Harry’s children, his former partner and two colleagues in Hazelton have also tested positive. Wright-Simms added that her cousin, who lives in the Lower Mainland, has also recovered from the illness.

In the spring, The Tyee wrote about Wright-Simms’ brother, Richard Wright, who died later in May, and the family’s work to foster traditional practices in the face of pandemic uncertainty.

Wright-Simms said Madii Lii camp, located on Wilp Luutkudziiwus territory, a house group of the Gitxsan Nation, feels like the only safe place to be during the pandemic.

“I just want to migrate back out to the territory,” she said. “There’s nobody around other than nature.”