As pandemic restrictions brought increased isolation for many people, one Vancouver woman was emerging from years of loneliness.

Injured years ago, and living with chronic pain, she was dealing with debilitating side-effects from her opioid pain medications that made her anxious about leaving home.

Her relationships with friends and family had withered under the anxiety, and she felt like nothing could change.

But at a routine appointment at St. Paul’s Hospital in Downtown Vancouver, a closer look at her pain management strategy changed that.

“The pain and anxiety around her injury had taken over her life,” said Tamara Mihic, a clinical pharmacy specialist at St. Paul’s. “She was scared to make a change, but ready to make a change.”

Mihic helped the attending doctor adjust the dosage and combination of pain medications. Weeks later, she heard the patient was much improved.

Launched in January 2020 at St. Paul’s in partnership with the BC Centre on Substance Use, results from the program’s first six months show progress towards its goal of ensuring opioids are prescribed as effectively as possible in order to reduce misuse, long-term dependency, opioid use disorder and overdose deaths.

Similar programs exist at the Royal Columbian and Surrey Memorial hospitals in the Fraser Health region.

But as doctors at St. Paul’s requested more information about pain management and opioids, the need became clear for a program at the hospital, which handles much of the impact of Vancouver’s overdose crisis and serves neighbourhoods with a high proportion of vulnerable and elderly people.

“We’re in the epicentre of the opioid crisis, but there was no formal program to address hospital-wide safe and effective opioid medication prescriptions, said Mihic, who leads the program with addictions specialist Dr. Seonaid Nolan.

Canada is the second largest per-capita prescriber of opioids in the world after the United States, and the number of prescriptions have tripled in the last decade.

About 13 per cent of Canadians take or have taken pharmaceutical opioids, with two per cent of those individuals taking them for non-medical reasons.

But people whose pain continues after their prescriptions run out can often turn to illicit opioids like heroin, increasing their risk of overdose. Others can develop a dependency on the drugs.

“Looking at the data, a majority of overdoses are not from prescription opioids, so what we’re trying to do is to prevent people moving to the illicit supply,” said Mihic.

A study from the Centre for Addiction and Mental Health in Toronto found that about 83 per cent of patients who sought methadone maintenance treatment for opioid use disorder had been using prescription opioids, either alone or in combination with heroin.

Another study from the National Institute on Drug Abuse found that about 80 per cent of people in the U.S. who use heroin used prescription opioids first.

The program focuses on identifying patients at higher risk of bad effects from opioids in a number of departments across the hospital, where about half of patients are prescribed some form of opioid, most often hydromorphone, at any given time.

These risks can also increase based on the dosage and length of opioid prescriptions, or if the patient is also on sedative medications.

As the two-person clinical team, Mihic and Nolan work with the patient and attending doctor to learn their goals for pain management, share the facts about opioids and assess if the course of treatment is as effective and low risk as possible.

So far, 92 per cent of the program’s 589 suggested changes for 161 patients were accepted by the attending physician.

Mihic says that signals a desire to improve patient care and physician knowledge.

“Pain is very difficult to manage, especially chronic pain. And I think where over-prescription comes from is not knowing what to do, and doctors feeling like they need to give the patient something,” she said.

“It becomes difficult when you try to mention complex pain with a single medication.”

The subjectivity of pain is a challenge, but also an opportunity to really listen to patients and tailor their care based on the resources they have available.

The program is particularly important for Black, Indigenous and people of colour, who more often have pain dismissed or who are assumed to be drug-seeking. Mihic says a second look can help centre their experiences and goals.

“It’s not about cutting down or stopping necessary prescriptions, it’s about using the medication in the best way possible,” she said.

Education is critical when people are prescribed opioids, Mihic noted, as the potent medications can end up in the community if not dispensed, used and stored with care.

Heather Boswell of Moms Stop the Harm knows. She lost her son, Chris Baker, at 35 in June 2018 to an overdose of fentanyl-contaminated cocaine. His dependency had taken hold after he got opioids from a friend who was prescribed them by his family doctor after a car accident. 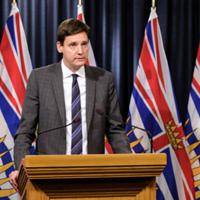 “Leftover pills from friends who did not take any, or all that they are prescribed, sit at home and can be used or stolen by others who do not have a prescription,” said Boswell.

While in its infancy and only funded until the end of 2021, the program has already received promising feedback from patients and physicians, and Mihic is planning to survey participants for a broader view of the program’s impact.

She hopes the stewardship program will become permanent and expand within the hospital and to other sites in Vancouver.

“Pain is subjective, and it’s different for each person,” said Mihic, who grew up in Downtown Vancouver, where she and her family still live.

“I want to care for people the way I’d want my parents to be cared for.”