‘WE ARE NOT DIVIDED’: ABOUT THE PROJECT

Every day this week The Tyee partners with the project We Are Not Divided, running stories about people, places and institutions that are succeeding in overcoming division.

We Are Not Divided is an initiative by Reasons to Be Cheerful, an uplifting journalism site founded by the artist David Byrne.

Visit the entire We Are Not Divided multimedia series here. You’ll find dozens of written features, infographics, video content and other interactive storytelling about the human capacity for finding ways to move toward each other.

The Tyee is proud to contribute pieces to We Are Not Divided, joining other collaborators including the Guardian, the Marshall Project, Next City, Freakonomics, Solutions Journalism Network and more. 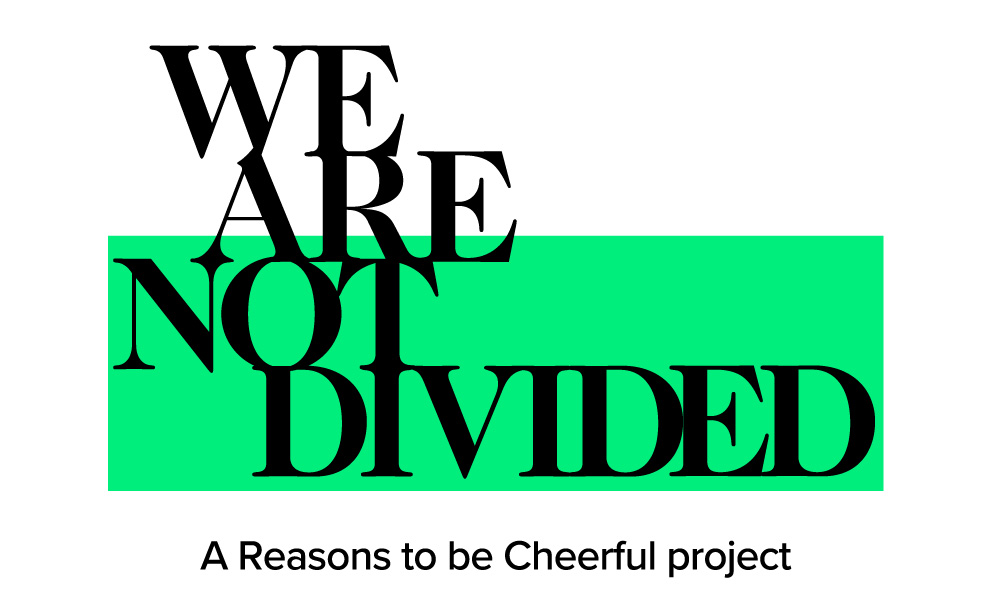 As soon as he heard the news, Paqtnkek Mi’kmaw Nation’s Chief Paul Prosper’s heart began to race. A school bus, a grade school and a sign in Antigonish, N.S., the remote county on the East Coast of Canada encircling the nation’s reserve, had been tagged with anti-Black and Indigenous racist slurs. Prosper’s heartbeat was anticipating terse interactions with parents, the school board and the Royal Canadian Mounted Police, not to mention the students. “You’re sort of walking into a hornet’s nest, you know, you’re bound to get stung,” he says.

But looking back now at the 2018 incident, a different detail stands out to him: a text message from Owen McCarron, warden of Antigonish, who wrote: “I heard what has happened. This is completely unacceptable, it doesn’t reflect the attitudes of the vast majority of people and I’m here to support in any way I can,” Prosper recounts.

“That was sort of a moment for me. That indicated to me that somebody actually cared for us,” Prosper says. Later, some members of the Antigonish council stood behind him at a school-wide debrief of the events.

These are small gestures, but what they represent is revolutionary. Across Canada, hundreds of municipalities like Antigonish sit right next to First Nations communities with very little communication, let alone collaboration. While the Canadian government now touts a “nation-to-nation” relationship with Indigenous Peoples, at the local level reconciliation is more of an afterthought. Municipalities often treat reserves as “blank spaces” as they develop around them and on the nations’ traditional territories. For this and many other historical reasons, Indigenous communities like Paqtnkek Mi’kmaw Nation report that racial divides are ever-present.

But the united front that Paqtnkek Mi’kmaw Nation and the town of Antigonish presented that day did not come easily. For the past five years, they have benefited from a unique countrywide program designed to help long-time neighbours like them become neighbours. The First Nation–Municipal Community Economic Development Initiative, known as CEDI, empowers municipal and First Nation leaders and their staff to, for once, sit down and talk as equals.

CEDI is a partnership between the Federation of Canadian Municipalities and the Council for the Advancement of Native Development Officers, known as CANDO, which represents Indigenous communities in support of economic growth. Since 2013, 15 pairs — out of hundreds of requests — have taken part in the program that is in principle about joint economic development, but in reality is more like decolonization bootcamp.

CEDI was born out of a tragically common juxtaposition in Canada. Municipalities across the country were investing millions in municipal water infrastructure. Meanwhile, according to an OECD report it is estimated that half of the water systems on First Nations reserves pose a “medium or high health risk to their users.”

“How could it be that the municipality has perfectly clean piped water, and across the street, if it’s a reserve, they could be living with a boil-water advisory? Where’s the breakdown?” Josh Regnier, a facilitator for the program, reflected on the program’s origins.

For CANDO, the motivation to develop CEDI was pragmatic: over the years, funding for First Nations infrastructure and development from the federal government has eroded, generating an incentive to combine efforts regionally toward economic prosperity. “That, though, is easier said than done,” says CANDO’s executive director Ray Wanuch.

Though it seems obvious that immediate neighbours should pool resources to share in water treatment plants or firefighting, it’s not that simple. In Canada, municipalities are products of the provinces, while First Nations have a direct relationship with the federal government. Although chiefs, mayors and councillors may share the same grocery stores, they have no obligation to work together.

The jurisdictional barriers, however, create a false sense of separation. The elephant in the room is that municipalities like Antigonish across Canada have taken over Indigenous land. As Prosper points out, in the early 18th century Indigenous nations signed peace and friendship treaties with Great Britain to respectfully coexist. But in the centuries that followed, Indigenous Peoples were increasingly faced with racist policies aimed at eradicating their identities and taking their land. In many communities, the relics of this violence — such as the residential school houses where children were forcibly assimilated — still stand in neighbouring towns.

“Some of our communities have had very bad history and relationships with their surrounding municipal neighbours,” says Wanuch.

That’s why the CEDI program doesn’t kick off talking logistics or finances — it starts with history.

In one of the key early exercises, each community’s council and staff, along with Indigenous Elders, are asked to outline their own understanding of the region’s history through sticky notes on the wall. Regnier describes one regional partnership where the municipalities outlined a laundry list of infrastructure: town hall, school, fire hall. The First Nations, at their turn, outlined a much longer timeline of teachings, cultural history and relationships and wars with other nations.

At the end of their timeline came a turning point, a nation-to-nation treaty signed with colonial governments, followed by a tight succession of painful events: the Indian Act defined Indigenous rights and identities, residential schools removed youth from their parents, the last fluent language-speaker passed. They were deeply offended that the treaty responsible for the existence of the municipalities, and the many examples of First Nation resiliency, were ignored.

From this groundwork, deeper conversations sprang up, like the question of who should have a voice in development decisions. With help from independent mediators and regular meetings over three years, the municipalities now include First Nations in development planning. “We should have been doing that all along,” said one participating mayor. “Better late than never.”

Collaboration between Indigenous and non-Indigenous communities has never been more vital.

Across the United States and Canada together, there are more than 1,200 federally-recognized Indigenous communities. Urban centres are growing and sprawling closer to Indigenous reserves, 80 per cent of which are less than 500 hectares in size (roughly 2.5 per cent the size of Portland), limiting independent infrastructure. Meanwhile, challenges from homelessness to wildfires eschew borders and demand a regional response.

The relationship between Paqtnkek Mi’kmaw Nation and Antigonish shows what incremental steps toward reconciliation can accomplish.

In the 1960s, a section of the Trans-Canada Highway connecting Halifax and Cape Breton severed Paqtnkek Mi’kmaw Nation’s reserve lands in two. And while they were guaranteed access in the early negotiations, the nation was locked out from 200 hectares of its reserve lands. McCarron said it was an “eye-opener” to learn of this deep wound in early meetings. Despite being effectively landlocked, his Mi'kmaq neighbors were “resilient in their resolve to someday get access to that highway,” McCarron says.

Now they have. With a multimillion-dollar highway expansion in 2019 came "an opportunity to right a historic wrong,” says Prosper. Through negotiations with all levels of government, and support from CEDI, the nation was able to recover access to its land with a highway interchange complete with a fuel depot, travel centre and cardlock.

In 2018, Prosper and McCarron signed a friendship accord in ceremony that acknowledges the Mi'kmaq territory on which they all live, and commits to regular joint council meetings. Now, they’re working towards a joint solar energy farm that will employ members of both communities. “There’s an understanding that we are connected, that our success will only further success in the area surrounding us,” says Prosper, adding there’s “a genuine feeling of congratulations” from the wider community. From his own conversations with the non-Indigenous community, McCarron agrees: “Attitudes are changing.”

Paqtnkek Mi’kmaw Nation and Antigonish aren’t the only communities making progress. In Thunder Bay, where more than one-third of Canada’s reported anti-Indigenous hate crimes took place in 2015, Fort William First Nation and the City of Thunder Bay found their own shared area of economic interest. The First Nation had a large piece of contaminated lands they couldn’t use. The city, on the other hand, had run out of land for industrial clients. So they came together, pitched the idea of an industrial park to funders and were able to secure the money needed to bring it to market.

Elsewhere, First Nations and municipalities from British Columbia to the Northwest Territories and the Atlantic are working together to build transit infrastructure, establish joint tourism initiatives and improve emergency management.

And though they have every reason to turn inward in the face of COVID-19, these relationships are proving their strength. The pandemic has revealed the lack of relationship between many municipalities and First Nations across Canada, as towns reopened without consulting their First Nation neighbours, many of which still have travel restrictions.

In contrast, Antigonish and Paqtnkek Mi’kmaw Nation released a joint statement in response to the pandemic in March, while in April, a regional district and First Nation in British Columbia built a joint economic recovery task force through video conference. In Manitoba, partners overcame a deep historical trauma to lobby governments and investors to reverse the closure of a local factory that would have eliminated roughly 250 jobs. As CEDI prepares to welcome another cohort in 2021, program managers say its primary funder, the federal government, is looking to adapt the model toward recovery from the pandemic.

Marissa Lawrence, senior program officer for CEDI, says the nine partnerships finishing the program have embraced video conferencing, but there’s no doubt COVID-19 presents challenges. “My personal opinion is that you can’t replace relationship-building face-to-face,” says Lawrence, noting that their current partners had spent one year together before the pandemic hit.

As this crisis has us turning back to local economies, Lawrence says, these relationships are proving their worth. A resolve to come back to the table in the face of disruption may be harder to measure — but it’s an important marker of success.

Chief Prosper has a similar measure: “If it appears to be uncomfortable, and you seem almost out of your place, then I think that’s a certain indicator that you’re doing something groundbreaking.”

This story was published as part of We Are Not Divided, a special editorial project of Reasons to be Cheerful that explores the human capacity to overcome divisions.