Former Vancouver mayor and BC Liberal candidate Sam Sullivan is defending his decision to support Safer Vancouver, a group that has campaigned against harm reduction and had a spokesperson who suggested institutionalizing people with mental illness and addictions on a boat in the Fraser River.

Sullivan, running for re-election in Vancouver-False Creek, said that while the group has the same name as a previous organization, it’s not the same and doesn’t share the hardline position of the former Safer Vancouver, which is now known as Save Our City.

“Safer Vancouver is different than it was even a month ago, there’s been a lot of reforms going on over there,” Sullivan told The Tyee.

“It’s various different groups that have coalesced and broken apart and come together — there’s the Downtown Community Safety Watch, there’s Save Our City, which used to be Safer Vancouver, and now there’s Safer Vancouver, which is one faction of them.”

Sullivan has been advocating for constituents who didn’t want to see an overdose prevention site moved to an indoor location at Seymour and Helmcken Streets near Emery Barnes Park in Yaletown, saying they feared the move would bring more violence, open drug use and discarded needles to their neighbourhood.

“The Yaletown site is particularly outrageous because it drops people with severe untreated addictions into the middle of a neighbourhood full of young families struggling with mortgages and raising children,” he has written. “It is right across the street from a playground and soon a new school.”

The decision on the site comes amidst spiking overdose deaths and growing homelessness, both made worse by the COVID-19 pandemic. The latest overdose statistics show that 1,202 people have died so far this year, far outstripping the number of 983 deaths for all of 2019.

“They don’t make medical sense where pharmaceutical options are available.... The supervised injection model is where people go and steal or panhandle aggressively, or prostitute so they can get money,” Sullivan said.

Terry Lake, a former BC Liberal MLA who was the province’s health minister during the overdose crisis in 2016, said on Twitter that he was disappointed by those comments. Safe consumption sites “keep people alive and are not a substitute for opioid agonist treatment but rather part of a comprehensive approach to public health,” Lake said.

But Sullivan said he’s proud of his record in voting to support Canada’s first safe injection site, Insite, as an NPA city councillor. At that time, there were no alternatives for people using illicit substances, he said.

As mayor in 2007 Sullivan said he championed the prescription heroin model of safe supply as practised by Crosstown Clinic in the Downtown Eastside. Expanding those kinds of safe supply programs is a better option than overdose prevention sites, he said.

“Now there is no way people should be taking street drugs when pharmaceutical alternatives are available,” Sullivan said.

Safer Vancouver formed after homeless people were moved from a tent city at Oppenheimer Park in the Downtown Eastside to the Howard Johnson hotel, now called Luugat, at Granville and Davie streets. Some residents complained open drug use, crime and needles in parks increased after the move.

The previous version of Safer Vancouver called harm reduction a “failed experiment,” lobbied for an audit of all Downtown Eastside agencies and had teamed up with StepUP, a group of homeowners of multimillion-dollar properties who opposed the BC NDP’s extra tax on homes worth over $3 million.

Former spokesperson Dallas Brodie suggested people struggling with mental illness or addiction should be locked up in institutions outside cities. She’s now with Save Our City.

“She lives in Shaughnessy. She’s not a part of this Yaletown group,” Sullivan said of Brodie’s involvement with the group.

On Oct. 10, Sullivan also appeared on a podcast hosted by James Faulkner, a Yaletown resident who has interviewed Brodie several times.

On that podcast Faulkner said he believes people who use drugs are a “tribe” while middle-class downtown residents are another “tribe,” and the two groups would find it difficult to live beside each other.

“The whole lifestyle of Vancouver — the tribal part of people who work really hard to pay an exorbitant amount of money for real estate, probably more than they can afford — now have to try to use whatever skills they have to navigate being encountered by people who really don’t provide anything back to the community,” Faulkner said during his interview with Sullivan.

At many points in the interview Sullivan pushed back against that view, saying that when people with addictions are living in housing where they are properly supported, they are “good neighbours.”

Sullivan also spoke about the history of drug enforcement in Canada, explaining to Faulkner that Canada followed the American model of enforcement rather than the British model of treating addiction as a medical problem.

“Let’s define good neighbours,” Faulkner responded after Sullivan’s history lesson. “Do they contribute back to society?”

Sullivan told The Tyee that Faulkner has an audience of people who live in Yaletown, and he wanted to get his views across to that audience.

The Tyee asked Geldert whether Safer Vancouver supports harm reduction and safe supply. He didn’t answer, but in email said the group is “committed to advocating for solutions that result in a reduction in the number of people consuming drugs on the street, overdose deaths and harm resulting from the use of unsafe supply.”

Sullivan said he doesn’t agree with the way the NDP government expanded safe supply with substances like Dilaudid tablets, which many users then crush to inject even though the pills are not designed for injection. 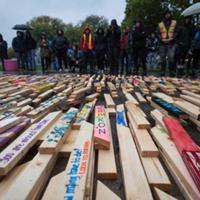 Where They Stand: What BC’s Parties Promise on the Overdose Crisis

Sullivan would like to see an expansion of the prescription heroin program that still runs at the Crosstown Clinic in the Downtown Eastside, a program that started as a research trial and is still limited to under 200 participants.

Sullivan was also criticized for including a quote from Garth Mullins, a journalist and drug user advocate, in a recent campaign video in an attempt to show that harm reduction advocates are critical of the NDP’s approach.

The video also included warnings that an overdose prevention site at Helmcken and Seymour would bring needles and crime to the neighbourhood.

But Mullins responded that his quote had been used without his permission, and called on the BC Liberals to remove Sullivan from their slate.