If you ask provincial health authorities, British Columbia’s schools have fared well since 85 per cent of students returned to school last month. Despite a steady creep of new daily COVID-19 cases — another 499 over the weekend — there have been no reported outbreaks in schools.

But that depends on your definition of “outbreak.” Nearly 3,000 people have signed an open letter from Coralynn Gehl, parent of a Grade 7* student at Caulfeild Elementary in West Vancouver, calling for change in how B.C. health authorities count infections at school.

Nine people in a Grade 2 class at Caulfeild contracted the virus last month.* Another nine people, family members of students, were also infected.

It’s enough to make Gehl question how she will vote in this year’s provincial election.

“To be honest, I haven’t decided yet,” she said last week.

A Facebook group created by Prince George parent Tammy Loehndorf called on parents to keep their kids out of school Tuesday to protest the lack of COVID-19 prevention at schools. An estimated 800 parents across B.C. were expected to participate.

The Tyee spoke to five parents, including Gehl, about how back to school plans during the pandemic are impacting how they will vote. Gehl was not alone in her indecision.

“I know that a lot of those people are reaching out to politicians, addressing the letter, and we haven’t heard anything,” she said.

“So, for myself and a lot of the people I’m talking to, we’re kind of waiting to see who jumps on it first and is willing to actually acknowledge that there is an issue that needs to be paid attention to.”

Gehl’s letter calls on provincial health officer Dr. Bonnie Henry and Vancouver Coastal Health to inform the school community whenever a student is exposed to the virus and require parents to keep all siblings at home if a student is required to self-isolate.

So far there have been no changes to how provincial or regional health authorities are tracking cases in schools. Nor have any of the political parties mentioned changing the approach, though some have more complete pandemic school platforms than others.

The Green party promises “more robust” online and remote learning options for students. As well, its platform guarantees 2019/20 funding levels for this school year and the next, even if in-person enrolment falls.

The BC Liberals promise access to full-time education for all students, whether they’re learning from home, class or a hybrid of both. They also promise more supports for students with disabilities, who have been left out in some districts.

BCEd Access, a parent-run advocacy organization promoting access to education for students with disabilities and complex learning needs, has been tracking how many of those students have been sent home from school over the past few years.

Not surprisingly, this year has been worse than previous ones, says co-founder Tracy Humphreys. In the first week of October alone, 55 parents reported their children missed school.

“Some of it is also not having the adequate support,” Humphreys said, referring to a shortage of both education assistants and teachers with special needs training, as well as inadequate communication from schools to families about when their kids could come back to school.

“All of these were pre-COVID issues. And then the additional COVID issues are the families who have children or family members who are immunocompromised, they’re just not comfortable sending their kids in,” she said.

Tracy Casavant, who has two children, has immunocompromised family members. She’s decided to keep her kids at home, where they receive limited education support from school.

“It’s a gong show for the teachers, and I feel so bad for them. Because the classroom teacher is the same teacher who is meeting with us online,” Casavant said.

“The teachers have been instructed that they are only allowed to provide students with three assignments per week: one reading, one writing, one math. No other curriculum support, no additional resources.”

Casavant, who has a background in chemical engineering and environmental studies, shares Gehl’s frustration with how the provincial and local health authorities are reporting on COVID-19 in schools.

“The number of cases in schools is a reasonable metric by which to measure the back-to-school plan,” she said.

“If three kids from the same school happen to get COVID from a teammate from a different school at a soccer practice, I still somehow want those three cases linked to the schools. I’m OK if you say, ‘We suspect community transmission,’ but these three kids were contagious at school. It’s just not possible that all of these kids that are testing positive were not in school in the previous 72 hours.”

Like Gehl, Casavant isn’t sure who she will vote for yet.

“The Liberals were a disaster for public education. I’m really not happy with the NDP and this plan,” she said, adding the Greens seem to be listening to parents the most.

“On the other hand, I’m paying close attention to the polls in my riding, and I may end up strategically voting for the least-worst option.”

Lisa Singer, a Surrey-based teacher and parent of a Grade 8 student studying at home during the pandemic, says she could tell from the parties’ election platforms who prioritized education and students the most.

Specifically, she pointed to where kindergarten to Grade 12 education is covered. The Green party addresses it on page five of its platform. It’s on page nine for the Liberals. But the NDP doesn’t address education until page 24.

“Right there, that tells me the priorities for education and keeping the students safe for the three parties,” she said.

Singer has voted NDP since she moved to the province 30 years ago. She even campaigned for them in 2017. But not this year.

“I will be voting Green. In fact, I did vote Green already,” Singer said, adding she would not vote Liberal because of the party’s past education cuts.

Nancy Smith is staying home with her son, who is in Grade 4 this year. While learning from home he gets coursework delivered every two weeks, supplemented by two lunch hour Zoom calls with a teacher twice a week. Smith will not be voting NDP.

“In April, if they had schools back on, it would have been an endangerment to everybody. And now it doesn’t seem to be a problem for some reason,” said Smith, who lives in Maple Ridge.

She fears an increase in cases that will strain hospitals. 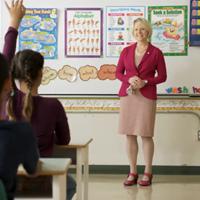 Hit the Brakes: Five Things that Must Change Before BC Schools Reopen

Smith is most concerned about information indicating some people — known as “long haulers” — who contracted COVID-19 are still showing symptoms months later.

Dayna Wilson is the only parent who spoke to The Tyee who will definitely be casting a vote for the NDP this year, despite both her opposition to the Site C dam and the government’s approach to schooling during the pandemic.

Wilson’s kids attend school in Port Coquitlam, although she would much prefer to keep them home if it was an option for the family.

“I don’t love it, I’m not a fan. It is a failing,” she said of the back-to-school plans during the pandemic.

“But the NDP has done a really good job in all other aspects. I feel like Horgan’s done an excellent job with responding to the pandemic crisis; in all other aspects of my life I feel safe. I think that everyone’s doing the best they can, and I think the alternatives are so unappealing to me, that in the end it’s just not an option for me to do anything other than NDP.”

*Story updated on Oct. 21 at 11:51 a.m. to correct information about the grade of Coralynn Gehl's child and the students at Caulfeild school that contracted the virus.