Canadian police forces have received millions of dollars from oil companies, banks and financiers, through shadowy charitable foundations that have little public oversight and increasingly serve as a “cash cow” of private money.

These police-affiliated organizations based in large cities across Canada have funded helicopters, armoured vehicles and surveillance technology for police departments, as well as many community and youth-oriented programs, according to an investigation by The Tyee.

As the Defund the Police movement continues to gain traction, a leading expert on police foundations says police may use them as a “fall-back strategy,” turning to corporate coffers to make up for any potential budget cuts.

The Vancouver Police Foundation, whose current “corporate partners” include LNG Canada, Royal Bank of Canada and real estate companies, has given the city’s police more than $3 million dollars in the last five years, paying for a patrol boat, night-vision binoculars, and a drone program.

Oil companies like Enbridge, Cenovus and Canadian Natural Resources Ltd. helped kickstart the Calgary Police Foundation in 2012 with million-dollar donations, and pipeline company TransCanada is an annual donor, though the foundation would not say how much current donors give.

Major companies are also frequent sponsors of conferences and yearly galas raising money for the police, and have top staff serving on the boards of police foundations.

“Police foundations are already a growing source of corporate money to police departments, yet their growth and operations have happened largely under the radar, with no public scrutiny,” said Kevin Walby, an associate professor of criminal justice at the University of Winnipeg who has closely studied police foundations in North America.

“If a new movement succeeds in clawing back their public funding, police will probably look to these foundations, telling them, ‘We got slashed, time to open up the wallets.’”

Such foundations were first launched in New York in the 1970s and have since spread across the continent, with eight having been formed in Canada in the last 25 years.

Walby says a mix of public-friendly initiatives has long been part of the PR strategy of police foundations.

“The soft and fuzzy branding of foundations suggests they are all about contributing to community well-being, and they do sprinkle some money into kids programming, or diversity and conflict resolution initiatives,” Walby said. “Part of this is about building social legitimacy for the police, and part of this is just camouflage for how, in a lot of cases, money is being funnelled into more militarized policing programs like SWAT teams, tactical equipment and surveillance tech.”

The Vancouver Police Foundation, which has also funded an armoured vehicle and a $500,000 SWAT mobile command truck for the Vancouver police, did not return multiple requests from The Tyee for an interview.

In the wake of the killing of George Floyd in the United States, coalitions have sprung up in cities across Canada arguing that public funding to the police is already too high and that spending should be diverted to social programs and mental health services.

Across three levels of government, Canada spends more than $15 billion a year on policing, with major cities giving between 15 and 20 per cent of their municipal budgets over to police.

In Winnipeg, where the police department has considered creating a foundation to secure additional funding, that budget allocation has reached as high as 25 per cent.

While other city’s police forces have recently tried to start foundations, there has been some pushback.

The Saskatchewan police commission chair reacted to efforts in 2016 to create a foundation in Saskatoon by prohibiting police from receiving private money, citing the need to avoid the perception that special treatment can be bought by private funders.

As charitable organizations, police foundations are exempt from any legislated obligation to provide the public with access to its documents or records.

“The funnelling of corporate money into police forces raises all kinds of questions about conflict of interest and public democratic control of police,” said Walby. “When oil companies, real estate companies, or billionaires fund police, it raises the spectre of whether police become beholden to their interests.”

The spokesperson from the Vancouver Police Department suggested that the movement of money from corporate donors through the foundation removes any potential conflict of interest.

“The foundation is set up to prevent any conflict of interest. All donations are made directly to the foundation and program funding comes from the foundation to the Vancouver Police Department. It does not come from specific donors.”

Yearly galas in Toronto, Vancouver and Edmonton, sometimes in affiliation with foundations, have also served as opportunities for sponsorships and mingling between police and corporate officials.

In a study published in an academic journal in 2018, Walby and his fellow authors found that manufacturing companies, especially of lethal and non-lethal weapons like Taser, were the biggest sponsors.

“At these galas not only do donors pay thousands of dollars for tickets but they have privileged access to key police decision-makers, an opportunity to go outside the normal processes of procurement and influence police priorities” Walby says. 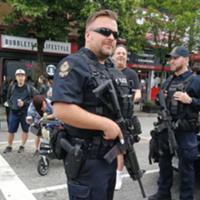 Walby says sponsorships and foundations are part of an increasing trend of closer relationships between corporations and police departments in the last decades.

The Calgary Police Foundation, which exclusively funds police initiatives in the community, refused to reveal a breakdown of how much current donors give.

“I couldn’t disclose that amount, it wouldn’t be appropriate, I’d have to get confirmation from those companies that they would want to put that number out publicly,” senior director of community engagement Barbara Pohl told The Tyee. “Not all companies would want to publicize that amount.”

She also told The Tyee that the foundation doesn’t give money to the Calgary police forces. “We don’t fund the police service. Our money never goes to Calgary Police Service,” she said.

The most recent Canada Revenue Agency filings, however, show that in 2018 the Calgary Police Foundation gave $908,418 to the “Calgary Police Service/City of Calgary,” and similar sums in the years before.