An advocate for drug users says a B.C. government commitment to fund more overdose prevention sites is welcome, as the illicit drug supply has become more poisoned during the COVID-19 pandemic.

But there’s no guarantee the efforts will slow rising death rates without a similar effort to ramp up safe supply programs, Jordan Westfall, co-founder of the Canadian Association for Safe Supply, told The Tyee.

“We’re going to see an unpredictable illicit supply unless the province moves to introduce more alternatives, and broaden those alternatives,” Westfall said.

The funding will also go towards expanding access to “safe prescription alternatives for people at high risk of overdose.”

“There are very few sites where users can smoke drugs, so it’s positive that the province is adding inhalation services,” Westfall said.

B.C.’s overdose death rate spiked in 2016 and 2017 but fell throughout 2018 and 2019. That decrease was in part due to measure like overdose prevention sites, where drug users consume drugs in the presence of staff or volunteers who can provide first aid if they overdose.

But that progress was lost as the COVID-19 pandemic has dragged on, with some services reduced or closed, more people using alone and the drug supply becoming increasingly toxic.

In May, 171 people in B.C. died of overdoses and in June, 175 people lost their lives. Both months broke historical records for overdose deaths in B.C.

Dr. Mark Lysyshyn, the deputy chief medical health officer with Vancouver Coastal Health, said drug checking and reports from the B.C. Coroners Service are showing higher levels of fentanyl in street drugs. Fentanyl is also present in drugs like methamphetamine and cocaine, an especially dangerous combination because people using those stimulant drugs aren’t expecting them to contain an opioid like fentanyl. 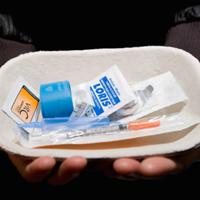 ‘We’ve Literally Been Held Hostage in Our Own Injection Site’

But Westfall said hydromorphone tablets don’t work for everyone, and there needs to be an injectable option.

Westfall is calling for a prescription heroin program to be developed.

Guy Felicella, a former drug user who now works with the BC Centre for Substance Use as a peer clinical advisor, said improving access to a safe drug supply and expanding the types of drugs available for those prescriptions needs to be the number one priority right now.

“How about, if you’re going to use the contaminated drug market, test your drugs, and here’s safe supply. It’s just such a deadly game.”