Rain on the windshield of Ben Wilson’s Ford pickup obscures the south shore of Francois Lake as we approach on the ferry. On the dash, the outside temperature reads 8 C.

The cool and wet July weather is nothing like two years ago, when fires tore through the region. The village of Burns Lake, 30 kilometres to the north, saw less precipitation in the entire month of July 2018 than the first half of the month this year. Temperatures climbed consistently into the 30s and the landscape, much of it beetle-killed pine, was tinder-dry.

In August 2018 — the worst fire season on record — British Columbia declared a state of emergency as more than 1.3 million hectares of forest were lost across the province, more than half here in the northwest.

Evidence of those fires is everywhere as we roll off the ferry. In Southside, a loosely defined area that extends from Francois’ southern shores to Ootsa Lake, about 50 kilometres to the south, five fires burned, three of them combining to form the 150,000-hectare Babine Complex mega-fire. Overall, three-quarters of the Cheslatta Community Forest was lost.

Now, with a $1.25-million grant from B.C.’s Forest Enhancement Society to log and rehabilitate burned forests, the Cheslatta Carrier Nation hopes that some of the timber and economic opportunities damaged by the fires can be salvaged.

Already, logging is underway in burned areas of the Cheslatta Community Forest, where timber harvest wouldn’t otherwise have been economically feasible, creating jobs for the community and spinoffs across the region.

The work is being done with a view to creating healthy forests, speeding up regeneration and reducing carbon emissions by ensuring waste wood is used rather than burned. It’s also reducing the risk that fire could consume more of Southside’s forests.

The partnership is a step toward correcting a history of mistrusting the provincial government by local residents.

As the fires burned that summer two years ago, about 100 Southside residents — upset that B.C. Wildfire Service wasn’t protecting timber stands and the livelihoods that depend on them — defied an evacuation order to stay and fight.

Southsiders used their own machinery to build fire breaks, smuggling fuel and supplies across Francois Lake under cover of darkness when the province blocked access to the ferry and additional firefighting equipment.

Wilson, forestry co-ordinator for the Cheslatta Carrier Nation, which has 140 on-reserve members, says many residents would have rather seen their homes perish than their livelihoods. “A lot of us thought that it was wrong — still do. There’s still a lot of mistrust,” he says. “Cheslatta were quite proud of that community forest.”

In 2002, Cheslatta became among the first — if not the first — Indigenous nation to be awarded a community forest agreement after nearly a decade spent working with the province to re-imagine how forestry could look on the territory, says Mike Robertson, the nation’s senior policy advisor. The community forest model grants timber harvesting licences to local governments so they can manage forest resources in a way that benefits the community.

“Usually when somebody tells us it’s never been done before, that just inspires us to move forward,” Robertson says.

In the 1990s, the B.C. Ministry of Forests had plans to harvest 88 per cent of the timber in the Cheslatta watershed over the coming 25 years. The nation opposed the plans, and in 1995 the province agreed to suspend logging in the area for five years to work on an agreement — a controversial move at the time, Robertson says.

In 1996, the nation was given a licence to harvest trees that had been submerged since the early 1950s, during the flooding of Ootsa and Cheslatta lakes to create the Nechako Reservoir, which provides power to the Rio Tinto Alcan aluminum smelter in Kitimat.

The rising water took more than just trees and territory from the nation — homes, burial grounds and cultural sites were lost and Cheslatta members scattered throughout Southside.

The availability of submerged logs and beetle-killed wood led to the creation of Cheslatta Forest Products in 2001, which began as a three-way partnership with Ootsa Resources and Carrier Forest Products.

While in operation, the mill, located on Ootsa Lake, processed 300,000 cubic metres of timber a year and employed 140 people from the surrounding area, contributing nearly $1.5 million per month to the regional economy.

But despite an abundant timber supply, the mill closed in 2008 as rising fuel costs made the diesel-generated operation uneconomical. Ironically, after everything the nation had given up to create a power-generating station, BC Hydro refused to spend the several million needed to bring power to the mill.

“There’s been a long history, decades, of trying to get three-phase power to where the mill used to be on Ootsa Lake,” Wilson says.

Recently, it appears the province has been working to make amends for these historic wrongs.

Last spring, Cheslatta members voted unanimously to accept a settlement intended to address the reservoir’s impact on the nation. It provides financial compensation and land transfers from the province over a 10-year period. Included in the agreement is collaborative management of local provincial parks.

This winter, the nation secured a Forests for Tomorrow grant to remove young stands damaged in the recent fires. The grant from the Forest Enhancement Society of BC is also creating forestry opportunities in Southside that would not otherwise have been economically feasible due to low timber volumes.

The grant is part of $235 million the province gives the Forest Enhancement Society of BC to allocate over five years, with $79 million distributed this year. The province announced similar grants this month for the Williams Lake First Nation and Terrace Community Forest.

According to Doug Donaldson, B.C.’s minister of Forests, Lands, Natural Resource Operations and Rural Development, the Cheslatta grant is unique in its focus on burned timber stands.

“What’s so impressive about these projects is that there’s lots of different benefits to addressing forest health. With the Cheslatta, there’s also community-owned equipment being used. In a sector that has seen some downturns, it’s good to have contractors and equipment working.”

Today, he adds, Cheslatta Forest Products is 100 per cent owned by the nation: “They’ve got a good skill set and track record in forest harvesting.”

Wilson’s pickup continues south through Danskin, Grassy Plains and Takysie Lake, where the Verdun Mountain fire broached the road, leaving charred remains to our right but sparing homes that line the lake on our left.

After Takysie Lake, the road turns to gravel. We turn onto a series of logging roads before pulling up to a turnoff where, after a summer of heavy rains, it’s too muddy for Wilson’s pickup. We walk in.

Here, tidy stacks of timber have been divided into piles: Those only superficially burned — about 25 per cent — will go to West Fraser’s Fraser Lake Sawmills to be milled into lumber. The rest are processed into heating pellets by Pinnacle Renewable Energy in Houston, B.C.

The transformation of burned logs into heating energy saves between 10,000 and 20,000 tons from being burned in slash piles each year: “Typically, we’re not burning piles out here anymore,” Wilson says.

In total, we’re looking at about 5,000 cubic metres of wood, Wilson estimates, or about one-tenth of the project’s total volume. Most are spruce and balsam; there’s also the odd pine, which were already standing dead and dry following the pine-beetle epidemic, that also survived the flames.

Over the next few years, the plots will be re-planted, mostly with spruce, giving a five- to six-year jump on natural regeneration, Wilson says. If some pine manages to self-seed, they will also become part of the mix.

The seedlings come from Woodmere Nursery, located 150 kilometres to the northeast in Telkwa. While logging is slated to finish this year, planting will continue into 2023.

“We planted one million trees this year,” Wilson says. “Because of these programs, we’ll be planting more, probably two million a year for a while.”

“The burned trees were starting to fall over, which creates a new fire hazard. It’s probably more susceptible to a fire now than when it was green,” Wilson explains. 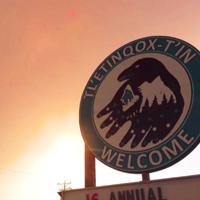 While the 2018 fire season was exceptional, the region saw several fires in the decade leading up to it that left behind scorched and dry timber vulnerable to the next wave.

The work of removing the timber as it begins to succumb to gravity is tricky and the charred logs abrasive and hard on machinery. But the nation and its non-Indigenous neighbours are glad to have the work.

While a Vancouver-based company is hired to re-plant, the logging is done by residents here in Southside, putting both local people and machinery to work.

Quantifying what the project means for the forest industry generally is harder to do, Wilson says, given the ups and downs of recent years.

“I wouldn’t say it’s been a normal cycle for the past few years. It’s been one crisis after another,” he says.