Youth who suffer an overdose could be involuntarily detained in treatment facilities for up to seven days under proposed changes to B.C.’s mental health legislation.

But some advocates say the changes will increase youths’ chances of overdosing upon release, erode their trust in health care and violate their human rights.

Laura Johnston, legal director of the non-profit group Health Justice, says Bill 22, which would amend the Mental Health Act to include a form of “secure care” for youth, was introduced by the government without public consultation or engagement with affected families.

And the Union of BC Indian Chiefs is concerned that Indigenous youth and families will be disproportionately detained and re-traumatized by the proposed system.

The failure to consult First Nations on the changes to the Mental Health Act is also a violation of the United Nations Declaration on the Rights of Indigenous Peoples and the province’s own laws adhering to the declaration, Wilson said.

“To see this legislation tabled during a time when the reality of systemic and blatant racism towards Indigenous peoples and other people of colour is undeniable, is extremely troubling and emblematic of a system that seeks to oppress rather than to support,” said Wilson.

Similar secure care policies have been implemented in a number of provinces such as Alberta and Quebec as a means of preventing overdose deaths.

But a 2018 report co-authored by former B.C. provincial health officer Dr. Perry Kendall found they harm youth living with intergenerational trauma and “may represent a continuation of colonial policies and state repression of Indigenous peoples.”

And by forcing youth to abstain from substances for seven days and then releasing them without continued support, their risk of overdose actually increases, the report found.

“A week is basically enough time for them to lower their tolerance threshold for using substances, so when you release them... they could be at increased risk of overdosing,” said Johnston.

Fear of detention may also drive fewer and fewer youth to call 911 or access supports when they are at risk of overdosing.

“You can alienate people from accessing social services and health care,” said Johnston. “It creates this chilling effect where youth don’t ask for help.”

B.C. also does not guarantee access to legal advice to those involuntarily detained as other provinces do, despite Attorney General David Eby promising to implement that right last year.

Parents and guardians would also be excluded from decisions about their children’s care and detention if Bill 22 passes in second and third readings beginning next week.

The B.C. government said it consulted with a number of experts and Indigenous health organizations, and that cultural safety is embedded throughout the legislation.

“It’s important to note that youth stabilization care is a measure of last resort,” said a spokesperson for the Ministry of Mental Health and Addictions in an email to The Tyee.

“These changes are just one piece of our work to support young people and our main focus continues to be continuing to build the voluntary system of care that young people need, from prevention to treatment and recovery.”

But as overdose deaths in the province surge amid an increasingly toxic street drug supply, particularly among First Nations individuals, Wilson and Johnston say an entirely new approach is needed. 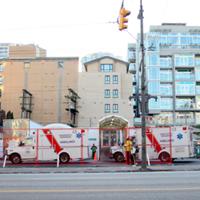 She also wants to see more resources in rural and remote areas so youth can be supported within their communities.

“They go into the hospital and they are detained, but the reason they are being detained is there’s nowhere else for youth to go to get those services,” said Wilson. “The government would have heard that if they did proper and adequate consultation.”

Bill 22 is past saving, Johnston and Wilson agree. Instead, broad and deep consultation with families, youth, experts and Indigenous community organizations is needed to modernize the outdated act.

“The current system doesn’t go far enough to be meaningful to the daily lives of our youth and our family who are in crisis,” said Wilson. “They are facing obstacles on top of obstacles, and change is vitally needed to save lives.”