Last November, a Calgary business crowd paid up to $110 a ticket to attend a lunchtime speech given by one of the Alberta oil patch’s most powerful allies. The event, hosted by the Economic Club of Canada, was entitled “The importance of Canada’s energy sector,” and the speaker that day was Victor Dodig, head of the Toronto-based bank CIBC, which has nearly $652 billion in assets.

With Canadian and Alberta flags draped behind the podium, Alex Pourbaix, president and CEO of the oilsands producer Cenovus, provided a brief and gushing introduction. “Victor and CIBC have been consistently strong supporters of the Canadian oil and gas industry,” he said. “I would say it actually goes beyond just being a supporter of the industry to being a defender of this industry.”

Pourbaix told the room that it’s “incredibly important” to have defenders like Dodig, because the oilsands are facing a “barrage of attacks” from environmental groups and politicians worried about climate change. He brought up the time in 2018 when Whistler’s mayor demanded that oilsands companies pay for climate damage linked to their business model and CIBC responded by cancelling an oil and gas investors conference in the town. Pourbaix expressed his “sincere” gratitude to Dodig for “defending our industry.”

Dodig took the stage urging the crowd to feel proud and patriotic about oil. “The energy sector in particular is a critical aspect of our national economy and a critical aspect of our national identity,” said the CIBC president and CEO. “It’s been that way for generations.” Dodig said to keep the sector strong Canada must immediately build the Trans Mountain pipeline. “This is a project that’s got to get done without any further debate,” he said.

And though Dodig acknowledged that an increasing number of large financial institutions are divesting from oil and gas, decisions made because of the industry’s high carbon emissions and mounting financial risks, he ended his half-hour speech by suggesting the oilsands industry has nothing to worry about from Canadian banks. “I can assure that the CIBC team will be here to address the challenges and the opportunities that no doubt will lie ahead,” he said.

Recent events have proven that promise to be genuine. As oil prices crater in the wake of COVID-19, shuttering nearly two million barrels of bitumen production per day, Dodig is now committing CIBC to doing all it can to ensure that oilsands companies “have the financial strength to deal with this very unique challenge.” His fellow banking executives appear to be taking the same approach, despite growing fears among investors about oil producers being unable to make good on tens of billions of dollars’ worth of loans.

Whether that strategy is financially wise or not, oil executives like Pourbaix are grateful. “I do want to give a bit of an appreciation to the Canadian banks,” he told an investor call not long before Cenovus announced a massive $1.8-billion quarterly loss. “In all my discussions with them, I think to an institution, they see the importance of this industry, and they have been very, very strong and standing behind the industry and working with the industry to provide liquidity.”

The business case for oilsands has never been weaker. So why are major Canadian banks committed to keeping the industry alive?

Dodig is not the only Canadian bank CEO to make the case for aggressive oilsands expansion. “We need roads, rail and pipelines to continue to harness our natural resources, which pay for much of what we take for granted and connect our country together,” RBC president and CEO Dave McKay said last year.

Scotiabank president and CEO Brian Porter has meanwhile called for “desperately needed pipelines, processing and export facilities.” And echoing Rebel News founder Ezra Levant’s “Ethical Oil” argument, TD Bank Group president and CEO Bharat Marani has asked “would you rather have this energy supplied by companies and entities in North America, where you have strict standards, strict regulation, strict enforcement? Or do you want the world [oil] demand to come from places where they may not have a similar kind of protocol?”

The support of these banking executives appears unwavering even as the oil industry’s financial health rapidly declines. Canada’s largest banks began the year with nearly $60 billion in loans to energy companies. But by April, roughly half of those energy companies had junk credit ratings, meaning they’re at a high risk of defaulting, which led BNN Bloomberg to report that “for Canadian banks, lending to energy producers is a riskier bet than ever.” Some oilsands investors, it noted, “have lost money with breathtaking speed.”

Banks have responded, however, by extending credit, relaxing payback requirements and helping oil companies restructure — whatever they can do to “be there for them,” in the words of TD’s Masrani. One analyst quoted by Bloomberg explained that “we have no reason to believe that Canadian banks will make any wholesale exit out of Canadian energy, and we assume that support [that] was there in 2015 and 2016 [oil downturns] will remain in place.”

CIBC, RBC, TD and Bank of Montreal didn’t respond to The Tyee’s request for comment. A spokesperson for Scotiabank wrote “Unfortunately [we] will pass on the opportunity to comment.”

The financial assistance provided by these banks is crucial for the oil industry’s ability to survive this crisis — and potentially recover. “The banks are supporting these oilsands companies every step of the way,” said Alison Kirsch, climate and energy researcher for the Rainforest Action Network, a watchdog group that’s tracked the relationship between Canadian banks and oilsands. “They’re supporting them in good times and in bad, and that’s what’s enabling them to dig up this dirty oil and get it to market.”

Partly that relationship is built on the ability of RBC, CIBC, TD, Scotiabank and BMO to make quick profits from bitumen expansion. Just days after Alberta premier Jason Kenney announced $7.5 billion in taxpayer support for the Keystone XL pipeline, Canadian banks led a $2-billion bond issuance that helped raise money for the project. The ratings agency Moody’s had warned that Keystone XL was unlikely to actually be built, but the banks didn’t appear concerned about that longer-term risk.

Leading the bond issuance resulted in “almost instantaneous profit and instantaneous pocketing of the fees” for those banks, explained Jason Disterhoft with Rainforest Action Network. If Keystone XL is cancelled it’ll be Alberta taxpayers, not the banks, on the hook, he said.

But the relationship between Canadian banks and oil goes deeper than just profits. They have a shared history that stretches back a century. “CIBC was the first charted bank to open a branch in Calgary more than 100 years ago, in the 1950s we were the first bank to create a resource development department to help support the emerging oil patch, we were here from the start, we’ve been here through good times and bad, we know your industry,” Dodig said during his Calgary speech last November.

The other big banks could easily claim the same. “The Bank of Montreal moved to Calgary in 1912, and all of the banks have been part of the oil and gas industry since oil was discovered, so they’re really tied in,” said Donald Gutstein, a Burnaby-based researcher and author who’s working on a paper for the Corporate Mapping Project examining links between Canadian finance and oil development.

That history has contributed to a shared corporate culture. The former president and CEO of Cenovus Brian Ferguson now sits on the board of directors of TD Bank. And former RBC executive George Lewis is currently on the board of Cenovus. “There’s a revolving door,” Gutstein said.

Does this help explain the assistance banks are offering distressed oilsands companies during the pandemic? In the U.S., financial institutions have shown much less sympathy towards shale oil producers devastated by the oil price crash, threatening in some cases to seize assets if loans aren’t repaid.

And as Canadian banks double down on the oilsands, financial institutions in Europe and the U.S. are pulling away. The latest, a late May announcement from Norway’s sovereign wealth fund to divest from four oilsands companies caused shares in Suncor, CNRL, Imperial Oil and Cenovus to fall up to seven per cent. That decision was motivated by concerns about climate change, as was the oilsands divestment announced earlier this year by BlackRock, a $7.3-trillion asset manager based in New York.

Shareholders in JP Morgan narrowly defeated a resolution in May calling for the Wall Street giant to pay greater attention to climate risks.

In Canada, meanwhile, top banks are increasing their lending to oil companies over the last year at higher than average rates even as bad loans and losses mounted. Now, with the oilsands facing possibly its worst ever crisis, the banks show no signs of pulling their support. “To stop doing certain things we do today undermines the stability of energy, the stability of our economy,” RBC CEO McKay said earlier this year. 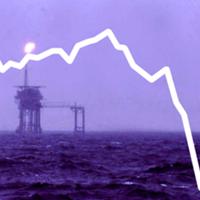 For Oil and Its Dependents, It’s Code Blue

The banks’ ability to support and defend the oilsands industry in this crisis is partly a result of the fact that energy companies only comprise two percent of RBC’s total government and business loans, and between four and seven per cent for other banks. The financial institutions also have support from the federal government, which is now providing loan guarantees to the oil and gas industry, reducing the risks to banks. And CEOs like Dodig and McKay are now reportedly advising Justin Trudeau on Canada’s economic recovery from COVID-19.

Given those executives’ deep connection to the oil industry, it seems a fair bet that a rapid shift off of fossil fuels won’t be part of those discussions. Despite Canadian banks’ public statements about the importance of sustainability and their investments in renewable energy, none of the top five have joined 170 other banks in signing the Principles for Responsible Banking, which calls for banks to meet the targets of the Paris climate agreement.

“About a third of the global banking sector has signed onto the United Nations’ initiative to promote sustainable banking,” Advisor’s Edge reports. But participation from Canada, he says, is “limited.”