Conservation officers in B.C. are bracing for what could be a busy season — and one that threatens the sustainable hunting of some wildlife populations. The service has already seen an increase in illegal animal kills in areas including in the North and Vancouver Island. Conservation officers are blaming a range of pandemic-related concerns, from boredom to food insecurity.

And while they say they are doing what they can to increase patrols, they are also asking the public to be on the lookout for suspicious hunting activity.

Many of the poached animals have been pregnant females, raising concerns about the future of vulnerable wildlife populations.

Six illegally killed moose have been discovered this spring in the province’s Skeena Region. Jeff Palm of the province’s Conservation Officer Service said because moose typically give birth in May, it’s not uncommon to find full-sized, unborn calves left with the animals’ remains.

“Typically, these moose are pregnant cows and it’s pretty sad to see an unborn moose calf in the gut pile,” he says.

Conservation officers made just such a grisly discovery last week east of Burns Lake; in addition, another female was found two weeks earlier north of the community. In March, four illegally killed moose were discovered between Burns Lake and Smithers.

While animals are often poached for their meat, there are times when the animal is shot and left in its entirety. Conservation officers work with local First Nations to ensure any meat doesn’t go to waste.

Wet’suwet’en Hereditary Chief Na’Moks, whose English name is John Ridsdale, says the most disturbing thing about a moose shot and killed on the Morice Forest Service Road in March was learning that it was a female. “We need the females for the next generation,” he says. “This is a food source and it’s a limited food source.”

The Wet’suwet’en Fisheries and Wildlife Department distributed meat from the animal to Elders in the Gidimt’en clan. The moose was shot on their territory.

Offenders have been identified in three of the six cases, Palm says.

He says the increase in poaching likely reflects crimes of opportunity as people head outdoors to avoid being cooped up at home.

“The southern part of the province has seen unprecedented outdoor activity with the COVID virus. People are off work and people are bored and they’re out recreating and trying to get out of the city with all the restrictions,” Palm says. “There are just a lot more people that are interested in occupying their kids who are out of school.”

On Thursday, the province opened many of its provincial parks and recreation sites to day-use.

Increased illegal hunting may also be driven by more than the desire to get outdoors. Empty supermarket shelves earlier in the spring have made food security a top-of-mind issue for many and that may be contributing to the increased poaching.

Vancouver Island is home to about 3,000 Roosevelt elk, which are a species of concern for the province. In March and April conservation officers discovered the carcasses of 15 elk that had been illegally killed in the Cowichan Valley. The discoveries are likely only a portion of the true loss.

Norris says typically one or two elk are illegally killed each month and the increase is a concern.

“It’s very frustrating for us seeing this. What’s most despicable is a certain percentage of them, the ones harvested, people don’t even take the meat. They shoot the animal, they get scared off or they decide it’s too hard to process it,” he says.

The loss of 15 animals — possibly more — is a hit to the beleaguered population. Elk hunting was suspended in the area after the population was decimated in the early 1900s. Since 2012, as the population stabilized, a limited entry hunt was phased in. The province issues about 25 elk hunting tags each year in the Cowichan Valley area. Another 20 go to First Nations in the region.

“Anything above and beyond the local First Nations hunt and the limited entry hunt obviously jeopardizes the long-term sustainability of the population,” Norris says. “If this continues, we’ll be right back to where we were and there’ll be no hunting for anybody. We don’t want that to happen, obviously.”

Chris Darimont, a professor at the University of Victoria and science director at Raincoast Conservation Foundation, says financial insecurity — whether real or perceived — has historically led to poaching.

“People are more likely to engage in illegal hunting and fishing [in times of uncertainty]. In fact, other economic downturns, notably during the Depression, there was a lot of illegal hunting,” he says.

“I think the [Conservation Officer] Service is quite right to be predicting more poaching at this time. For a lot of us, we’re relatively insulated from running out of food, but for a good chunk of the country and the province that live paycheque to paycheque, and many of whom may live in rural communities, this pandemic has been economically devastating.”

Darimont expressed concern about what he describes as the “big black box” poaching leaves in the midst of already uncertain wildlife data. He adds that humans, unlike other predators, tend to take the largest and most robust animals — those in prime reproductive age.

“Wildlife management is a really imprecise science with lots of unknowns or uncertainties about, for example, how many animals there are in a population. Even without the complications of poaching, that’s often uncertain,” he says.

He adds that it’s important to recognize poaching has nothing to do with legal hunting. “There are hunters, I’m one myself, that follow the rules and hunt only animals that are in season and take a quantity that’s allowed by law.”

The province-wide open season for black bears started April 1 and hunters who have a licence and tags can legally shoot the animals. Hunting season for ungulates varies throughout the province but starts as early as August in parts of the North and continues through the fall.

In the province’s far north, Tahltan Territory can see from 800 to 1,500 hunters in a season. This year, the nation is asking “hunters, wildlife enthusiasts and non-residents” to stay away from the territory for fear of spreading COVID-19 to remote communities.

“Normally, when there’s more hunters that translates to having more [poaching] in our territory,” Day says, adding that the Tahltan may look at expanding its Wildlife Guardian program as it increases patrols.

“We don’t technically have the jurisdiction to be arresting people or putting together any kind of force, but we will probably deploy a few different tactics to keep people from going to some key areas,” he says. 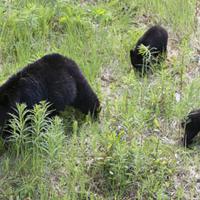 Never Mind Panic Buying. Is BC Ready for ‘Panic Hunting’?

With food security a concern this year, it’s more important than ever to manage wildlife properly, he adds.

“There’s a lot of wildlife issues in the North that need to be sorted out. Even though we’ve done a much better job in the last several years collecting data, collaborating with other nations and the province, there’s still a lot of work to do there.”

Tina Coleman, director of corporate operations with the BC Wildlife Federation, says hunting within the regulations is just another sensible choice — along with things like social distancing and handwashing — that should be made during the pandemic.

“We don’t want the bad apples ruining the bunch,” she says. “If anybody thinks about doing any poaching, we encourage anyone to report them.”

One easy way to report poaching is by downloading the BC Wildlife Federation’s Conservation App. Poaching can also be reported through the Report All Poachers and Polluters line at 1-877-952-7277.