The Tyee is partnering with the non-profit Salt Spring Forum to share video-recorded interviews like this one with leading experts related to the COVID-19 emergency. The first was with author and physician Kevin Patterson. For this instalment, Tyee readers were invited to submit questions beforehand to China historian Timothy Brook. His discussion of myths and facts about China and pandemics — past and present — is produced by Salt Spring Forum and moderated by French immersion and social studies teacher Louise Doucet.

Brook, a professor at UBC who has studied the history of China for almost half of a century, begins the conversation by addressing any Chinese viewers in Mandarin. Brook then explains in English what he told his Chinese viewers. “I neither support nor oppose China. My role is to be concerned about China and to analyze China.”

Brook grew up in Toronto in the 1960s and it was then that he became intrigued with China’s culture and its history. “China offered this kind of double opportunity. On the one hand, China was not part of the capitalist world that we had grown up in, but at the same time, it had its own deep traditions, different philosophies, different ways of looking at the world,” he says.

“I realized I couldn't understand China if I didn't start studying the language. I went to China in 1974 for the first time.”

Brooks is asked by Doucet about a chapter in his book that debunks the widespread assumption that the Black Death plague of the Middle Ages came to Europe from China. He explains how, thanks to genome sequencing, it is now possible “to reconstruct the DNA of the disease that struck Europe in the 1340s… and one of the interesting things we're discovering is that during that period of disease, there were outbreaks of epidemics in China a decade later.”

COVID-19, on the other hand, did originate in China, and Brook is critical of the way the Chinese government handled it initially.

Chinese authorities had the coronavirus genome sequence at the end of December but did not release that information to the World Health Organization until Jan. 10. “There was a 10-day period,” Brooks says, “that allowed the coronavirus to escape from the community in which it appeared, get into the hospitals and then spread out.”

The head of the emergency room at the Wuhan Central Hospital told eight of her doctors that there was a new coronavirus in the hospital. They started to pass the information over to their colleagues.

“[These] eight doctors were dragged into the police station and told to sign statements that their claims about the virus were false,” Brook says. “The Communist Party wanted this thing to go away.”

In early March, a popular magazine in China interviewed the head of the ER at the Wuhan Central Hospital. “It's such a sad account that she gives of the intense frustration she had trying to manage this,” Brook says. The Communist Party took the piece down immediately but it spread on the internet.

Brook believes the majority of the Chinese people do not know what is going on but educated people are aware and are furious.

“There's one professor at Tsinghua University in Beijing who wrote a blistering essay talking about the new totalitarianism and criticizing, very directly criticizing, the Communist Party for its handling of the disease and being more concerned with politics than it was for people's lives.”

Doucet asks Brook to discuss the “wet market” in Wuhan, where the virus emerged as a threat to humans. “Chinese medicine traditionally has the notion that certain animal body parts are beneficial for human health and these so-called wet markets are places where you can go and buy those exotic animals in order to make use of traditional Chinese therapies,” he replies.

“These wild creatures that they bring in are very expensive, only rich people can afford to buy them,” Brooks explains. “It's a way of showing off and it has disastrous epidemiological consequences.” 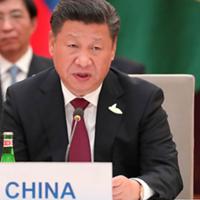 How China’s Fails, Lies and Secrecy Ignited a Pandemic Explosion

Doucet also asks about world travel and its contribution to the rapid spread of the disease. “We may fancy ourselves to be very globalized and very mobile in 2020, but even in 1348 people were travelling and people were moving and they were taking diseases with them. This is always going to happen,” Brooks replies, before adding “What we need to do as a global community is to think more consciously about travel.”

Brook believes that almost no governments have responded responsibly to the crisis. U.S. President Donald Trump’s bungling will ultimately pose a threat to China. “It will freeze the American economy for a period of time. The effects on the Chinese economy are going to be horrendous,” he said. And given that the virus causing COVID-19 is capable of mutating in a week or less, it could end up hitting China again.

Could this pandemic result in better relations between Canada and China, given the scale of the common threat? Brook wants to be optimistic but notes that China is still holding two Canadians hostage. “If China would like to have a relationship with Canada, it's up to China to return the two Canadian hostages and then we can work something out,” Brook said. “I for one will not go to China until those hostages are returned.”