B.C. has declared a public health emergency as the number of COVID-19 cases in the province almost doubled in one day.

Three more people have also died — two as a result of the ongoing outbreak in North Vancouver’s Lynn Valley Care Centre and one in hospital in the Fraser Health region — making seven virus-related deaths confirmed in B.C.

Henry and Health Minister Adrian Dix noted the surge in confirmed cases is due to a backlog of cases being confirmed by the BC Centre for Disease Control and the province will likely continue to see a higher rate of confirmed cases in the coming days.

The declaration of a public health emergency gives Henry the authority to issue verbal orders. She did that today, ordering restaurants and bars that can’t maintain appropriate social distancing — two metres of space between customers — to close or move to take-out or delivery only.

“This declaration of an emergency enables me to be faster, more streamlined and nimble in the things we need to do right now,” said Henry.

The declaration also allows her to authorize health care workers to practise in any health authority in the province.

“This is not forever, but it is for now.”

Henry used the emergency powers to order anyone entering B.C. from abroad to self-isolate for 14 days to monitor for symptoms of the virus. The provincial government had asked people to self-isolate. Now peace officers can enforce the requirement under the Public Health Act.

“It is something that we are able to enforce and are willing to do so if needed,” Henry said. 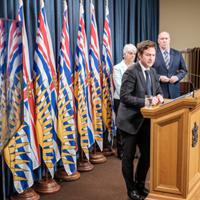 BC Shuts Down All Schools Across Province

Henry and Dix said the province’s testing strategy is pivoting to test people in communities where cases have been identified and health care workers and other frontline care staff.

The BC Centre for Disease Control has also launched an online assessment tool, which Dix said thousands of people have already completed. More than 3,000 people continue to call 811 every day, down slightly from a peak earlier this week.

Henry and Dix continued to stress the importance of thorough hand-washing, maintaining at least six feet of distance from others, and staying inside and at home if one is sick. “This is our time to be kind, to be calm, to be safe,” said Henry.

“We can help prepare ourselves for the weeks and potentially months to come,” Dix said.