“We are advising British Columbians against all non-essential travel outside of Canada, and that includes the United States,” provincial health officer Dr. Bonnie Henry said Thursday. “It is clear at this time that the evolving situation both in the United States and globally is a risk for all of us and we are strongly advising people not to travel.”

Henry had previously advised people not to travel by cruise ship and exercise caution in deciding where to travel internationally.

“Anyone who chooses to travel outside of Canada will be required to stay away from work or school for 14 days on their return,” Henry said. “We feel this is an appropriate measure at this time given the situation that we’ve been seeing, given the importation of travel related cases and the challenges that we have in monitoring them.”

Henry later clarified that the self-isolation would be voluntary.

“We are directing all event organizers in British Columbia that they will be required to cancel any gathering larger than 250 people,” Henry said.

That would include sporting events, conferences, religious gatherings and concerts.

The ban does not yet extend to closing schools.

Henry said that decision needs to be balanced against the risks of closing schools, something she said could be considered over March break which begins soon in most districts.

Event organizers should consider alternatives such as planning for smaller numbers of people, Henry said.

“I have heard from many, many event organizers that us making this recommendation makes it much easier for them to take those measures that we need them to take to protect our health.”

Earlier in the day, Henry and Health Minister Adrian Dix announced the cancellation of the World Women’s Curling Championship that had been scheduled to begin Saturday in Prince George.

Henry said seven more cases of COVID-19 have been confirmed in B.C., bringing the total to 53. There’s been one death in the province from the virus. 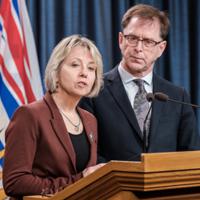 ‘High Vigilance,’ but No Drastic Action on Pandemic in BC

The new cases in B.C. include two more people who had recently returned from Egypt and one who had been in the United Kingdom. They also include two cases linked to the Hollyburn House long-term care facility in West Vancouver.

In the last 24 hours, the risk in B.C. hasn’t changed much, Henry said, but the situation internationally is changing rapidly. “The risk has increased all around us, I would say, and our understanding of the situation has also changed.”

U.S. President Donald Trump announced Wednesday that the U.S. would restrict visits for the next month from 26 countries in Europe, but not the United Kingdom, starting Friday at midnight.

According to Johns Hopkins Coronavirus Resource Centre, since the outbreak began there have been 128,343 confirmed cases globally and 4,720 deaths. They include 31 deaths in Washington state.