Planning staff shared findings from the early listening phase of the process today that revealed 55 per cent of respondents said their life in the city is getting worse.

The urgent priorities — taken from over 10,000 survey responses, over 1,000 interviews and about 80 community meetings — should be no surprise to those who live or work in the city: housing affordability, homelessness, climate change and transportation.

“These initial results cement what we have been hearing for too long in Vancouver — that our city’s housing and homelessness crisis is making it harder and harder for people to feel like they belong,” Mayor Kennedy Stewart told media today.

One respondent wrote that housing unaffordability will “create a monochromatic demographic” in the city and will impact culture and the quality of life.

Another addressed the challenges of homelessness, drug use and mental health issues. “Clean it up. House those people. Get them treatment… In a progressive city like ours, this should not happen.”

“I have so many fears,” wrote another. “I fear that the natural splendour of this place will be diminished by climate change. I fear that many beloved landmarks and parts of the city will be underwater due to sea-level rise. I fear that the wealthy will be unwilling to make sacrifices for the greater good and to protect the most vulnerable. I fear that we won’t welcome those in need who migrate from other places… ”

One person shared that despite an education in finance and real estate, they “still don’t make enough money to have housing security.”

“I am not alone,” they wrote. “I have lost many of the close friends I have developed over the years, especially those who hoped to start a family. It is so sad to be able to understand this system, and to see it still just beyond my reach.”

Many shared concerns about insecure housing, being forced to leave the city or being separated from friends and family.

As for what gives Vancouverites joy, many talked about the natural setting. “We know instinctively that it’s a place unlike almost any other in the world,” one person wrote. “We have a huge responsibility to honour that.”

Another wrote about the delight of “small shopping and eating districts that have their own sense of identity.” Many worried about industry and small businesses being squeezed out of the city.

The city plan, dubbed the Vancouver Plan, aims to reflect what citizens need and want for the next 30 to 50 years.

The process is meant to be convened by the community, with staff as the “ambassadors,” Susan Haid, Vancouver Plan’s deputy director, told The Tyee last month.

City staff will be hosting more in-person events for feedback and will soon be offering “conversation kits” starting March 23. Any Vancouver resident can take one, form their own group and the kit will walk them through the process of envisioning their future city. Staff will be gathering their submissions in time for a summit in May called the Future We Want.

“This process is about far more than developing a land-use plan, it’s really a strategy for becoming the city we want in coming decades,” planning director Gil Kelley told media. He called the process of listening to Vancouverites’ joys and struggles “humbling.”

“In creating the plan, we need to ensure that all members of society, including under-represented persons, along with others more familiar with civic processes, have an opportunity to shape the future city.”

The listening phase of the citywide planning process kicked off in November, but last month the city said not enough “diverse voices” were taking part. The majority of respondents were English speaking, over 40 and without young children.

The latest breakdown of participants revealed that’s still the case. 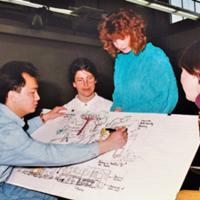 How Do You Plan for a Diverse City? Vancouver Once Got It Right

Ninety per cent of respondents speak English at home; the latest census reports that 74 per cent of Vancouverites do.

Forty-four per cent of respondents said they have kids; the census reports that 56 per cent of Vancouver residents do.

The age bracket most represented were people between 30 and 49.

But 20 per cent of participants reported this was the first time they had engaged with the city.

There was also a fairly even split between participating renters and owners, with renters at 45 per cent and owners at 42.

The final plan is expected to be presented to council in summer 2022.

People who live and/or work in Vancouver can find out more about the planning process and get involved here.