It’s unclear whether a non-confidence vote against the University of Northern British Columbia’s president will go ahead after Daniel Weeks announced Wednesday afternoon that he is taking an immediate and indefinite medical leave.

At a Jan. 22 senate meeting, Peter Jackson, an environmental science professor at the Prince George-based university, said he would be presenting a motion of non-confidence in Weeks at the senate’s next meeting, scheduled for Feb. 26.

Since learning about Weeks’ medical leave, Jackson said he was unsure whether he will proceed with the motion.

In an email sent yesterday to UNBC staff, Weeks said, “I am dealing with some matters that I have put on hold for many, many weeks, but on the advice of my physician, I should no longer delay dealing with them.” He added that Geoff Payne, a physiology professor and the university’s vice president of research, would serve as acting president in his absence.

Daigle has been at the university since 2015 and, as chief negotiator, has been at the centre of an ongoing labour dispute that saw faculty taking its grievances to the Labour Relations Board. She recently went under fire for a 2018 video where she spoke publicly about a 10-year plan to shut down the university.

Since Weeks joined UNBC as president in July 2014, the university has experienced two strikes, in 2015 and 2019. Both revolved around faculty salaries and ended in forced arbitration. The most recent strike ended Nov. 29 when faculty returned to the classrooms but filed a complaint with the Labour Relations Board.

Both the arbitration and labour board hearings are expected to take place this spring.

“At every level and every place there’s an opportunity for faculty to work with the administration to keep the university working better, they shut those things down and took a very aggressive and confrontational stance toward faculty,” Rader said.

Rader blamed Weeks for hiring Daigle, whom he describes as “a known anti-union administrator.”

Daigle previously spent 12 years at the University of Saskatchewan before leaving amidst controversy in July 2014 after the high-profile dismissal of a professor who published a letter criticizing the administration’s restructuring and budget cuts.

In 2008, the Canadian Union of Public Employees filed three unfair labour practice complaints with the Saskatchewan Labour Relations Board that accused Daigle, chief negotiator for the administration during a month-long strike at the university the year before, of refusing to take a tentative agreement to the university’s board of governors if a union representative participated in a news conference. At the conference, faculty, staff and students were to call for an external review of labour relations.

“She had basically caused this strike of the CUPE union at the University of Saskatchewan and has multiple unfair labour practice complaints brought against her,” Rader said. “To hire somebody like that and then to proceed to move faculty relations out of the provost’s office and into human resources, really sent a message that (Weeks) did not value or respect faculty.”

The university did not respond to questions about whether Daigle may have been pressured to resign.

In a Jan. 14 letter addressed to UNBC Board of Governors chair Lee Ongman, the Canadian Association of University Teachers (CAUT) expressed concern about the state of labour relations at the university. It offered to work with UNBC’s faculty association on an independent labour relations review and urged the board to participate in “a joint workplace restoration and relationship enhancement process.”

“In my many years of experience with CAUT, I can say without hesitation that I have not come across a more difficult and acrimonious labour relations environment than exists at UNBC today,” executive director David Robinson said in the letter.

“Academic staff strikes in Canada are extremely rare. What is even more unusual is for one institution to experience back-to-back protracted labour disruptions. Clearly, it is in everyone’s interest to resolve these matters.” 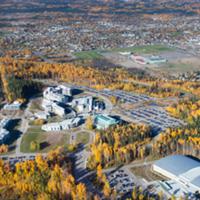 The Confederation of University Faculty Associations of British Columbia also released a statement on its website supporting the faculty association and CAUT’s call for an external review.

In response to the request, Matt Wood, director of communications and marketing at UNBC, said it would be premature to talk about next steps regarding labour relations until after the collective bargaining process is complete.

Wood said that a notice of motion will go before the senate steering committee to consider for inclusion in its Feb. 26 meeting and that the university would not comment until the senate had discussed the matter.

If the non-confidence motion does go ahead, it will need to be seconded and members will have an opportunity to debate before the vote takes place.

“It will be very interesting to see whether anybody rises to the president’s defence,” Rader said.