One in five children in British Columbia continue to live in poverty, according to a provincial child poverty report card released today by First Call: BC Child and Youth Advocacy Coalition.

But there are signs the federal child tax benefit that began in 2016 has started chipping away at family inequality. And several B.C. organizations have suggestions for how the province can further decrease child poverty.

The report is normally released in November — and November 2019 marked the 30th anniversary of the House of Commons’ pledge to eliminate child poverty by the year 2000. But Statistics Canada’s delays in providing data meant the report was delayed, and there are some information gaps. A more complete report card will be released this spring, First Call says.

The report card notes the gaps between child and overall poverty rates across Canada are shrinking. First Call credits the national decrease in child poverty to the first full year of the federal Canada Child Benefit, which launched in July 2016.

The report card also credits the benefit for an increase in household incomes for families receiving welfare and disability payments. B.C.’s new Child Opportunity Benefit, which starts with $1,600 for the first child; $1,000 for a second child; and $800 for each subsequent child under the age of 18, comes into effect fall 2020. The full amounts go to families with less than $25,000 income; benefits are reduced for families with incomes above that level. The income cutoffs will be indexed to inflation in “future years,” according to government.

Most single-parent households were led by women, whose median annual income was $44,960, or 72 per cent of single dads’ median income.

The report card also used 2016 census data to show that nearly half (44.9 per cent) of recent immigrant children, one-third (30.9 per cent) of Indigenous children living outside of First Nations communities and one-quarter (23 per cent) of racialized kids in B.C. lived in poverty.

The Tyee reached out to several organizations representing children, families or people living in poverty for their thoughts on what the upcoming provincial and federal budgets could do to alleviate or even eradicate child poverty. Here’s what they suggested.

Sharon Gregson, spokesperson for the provincial $10aDay Child Care Campaign, said the province’s budget next month should anticipate coming federal childcare dollars and aim to increase the number of $10-a-day childcare centres in B.C. from the current 53.

This fiscal year is the last of the three-year, $153-million BC-Canada Early Learning and Child Care Agreement, which started in 2017. During the last federal election campaign the Liberals’ pledged to open 250,000 more before- and after-school care spaces for kids under 10.

Gregson would also like to see the province fund childcare centres operating outside the traditional 9 a.m. to 5 p.m. working hours and a separate capital budget for childcare. Unlike public schools and postsecondary institutions, childcare capital costs come from provincial operations funding.

She would also like to see all families with incomes of less than $45,000 a year have access to no-fee childcare spaces, which would help low-income families financially and also give them a chance to participate in the workforce or go back to school. That won’t happen without an increase in the number of subsidized childcare spaces.

Karen Isaac, executive director of the BC Aboriginal Child Care Society, says additional resources are always welcome. But she believes developing Indigenous-led early learning and childcare goals, a plan to reach them and tools for monitoring progress along the way would help Indigenous families living in poverty.

“One of the things we’re missing is a place or a process where we can bring all these good intentions, and all this funding, and create public policy that has impact on the ground,” Isaac said.

Grand Chief Stewart Phillip of the Union of BC Indian Chiefs won’t be scanning upcoming government budgets for a particular dollar figure. Instead, he wants to see all Canadian governments negotiate appropriate resources with First Nations to ensure the full and fair implementation of a new law cementing Indigenous control over child and family welfare.

“We’re hoping that with the new legislation federally that gives us greater jurisdictional control over children and family issues, we’ll be able to rectify a lot of the abysmal statistics in regard to child poverty,” said Phillip.

“It’s been a long, hard-fought battle up to this point. Whereby in the past we’ve had to depend on the policy whims of the government of Canada, as well as provincial governments, we succeeded in elevating this issue to the point of legislative reform. Which gives us greater influence over budget issues and things of that nature.”

But underpinning every social and economic issue and measures to help eradicate family poverty for First Nations people is the need to recognize their treaty rights and settle land claims, she said.

“We’re working really hard to be setting up our title and rights on our territory, so we are able to have the lands and resources, because that’s what Canada basically took over and replaced it with welfare programs,” Wilson said.

“There is some headway being made, but it’s not enough or fast enough for our families who are living on those fringes.” 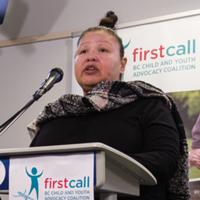 Little Change to Child Poverty in BC

The BC Poverty Reduction Coalition says the province’s current plan must adopt a gender-based lens to analyze how men, women, and non-binary people experience poverty differently.

“The lack of gender-based analysis in the poverty reduction strategy means that child poverty will continue to increase along gender lines,” wrote Viveca Ellis, the coalition’s interim community organizer, in an email to The Tyee. She noted the overwhelming rate of child poverty in single-mom homes.

An equity approach to poverty reduction is needed, she added, with particular focus on who is poor, how poor are they, and how long they have been poor.

“Without a robust equity approach with targeted interventions to address poverty for those most impacted, and those that experience the deepest systemic discrimination as they try to claw out of it, we see consistently higher poverty rates for recent immigrant children, off-reserve Indigenous children, racialized children and children with disabilities,” Ellis wrote.

The coalition also wants the province to increase disability and welfare rates to 75 per cent of the Market Basket Measure used by the federal government to establish the basic costs of living based on family size and location.

The lack of effective rent controls and slow progress on increasing affordable housing has contributed to an increase in the number of children living on income assistance, she wrote.