The kids aren’t giving up.

A crowd of 8,000 — many of them young — gathered outside the Vancouver Art Gallery to hear Greta Thunberg and demand climate action. It’s the ninth rally for Sustainabiliteens, the student-led group organizing Vancouver’s climate strikes.

The presence of Thunberg, the Swedish student who began striking outside her parliament in August 2018, galvanized the crowd. The 16-year-old has inspired climate activists young and old around the world.

Thunberg spoke with her signature candour in her Vancouver speech.

“If the adults really loved us, they would at least do everything they possibly could to make sure that we have a safe future — a future to look forward to. But they are not doing that,” Thunberg said.

“As it is now, it feels like they are doing the exact opposite, that they are desperately trying to change the subject every time the climate crisis comes up,” she said. “They are trying so hard to delay the actions required for preventing this crisis from getting worse because they are so afraid of being unpopular and to make uncomfortable decisions. It is like they are selling our future for their comfort and profit.”

By Thunberg’s side was Severn Cullis-Suzuki, the daughter of David Suzuki, who was also a young activist like Thunberg. Cullis-Suzuki was 12 when she addressed world leaders at the Earth Summit in Rio de Janeiro in 1992.

“If people would have listened back then, the world would be a completely different place than it is today. But the world ignored her, and world leaders continued to choose to look away from this crisis, even today.”

If you’re an adult and feeling threatened by the climate movement, Thunberg said she’s got “very bad news” for you.

“Change is coming whether you like it or not,” she said.

“We’re starting to see through their lies and we will hold [adults] accountable for their actions. We will be a constant reminder that they are failing, and that constant reminder is what we are today, and every Friday, every single day that goes by without sufficient action being taken and when the science is being ignored. Because we are not just some kids skipping school or some adults who are not going to work. We are a wave of change and together we are unstoppable. We will rise to the challenge, hold those responsible for this crisis accountable and we will make world leaders act. We can, and we will.”

Other speakers included Albert Lalonde, a Quebec student who has joined a lawsuit against the federal government by 15 youths and the David Suzuki Foundation. 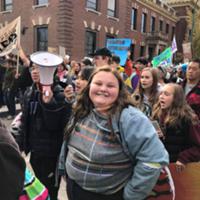 The lawsuit alleges the government has violated the youths’ Charter rights by contributing to high levels of greenhouse gas emissions and dangerous climate change.

The damage is real, Lalonde said.

“Instead of focusing on my studies, spending time with my friends and family, and just being a kid, I have spent more hours than I can count, fighting for and demanding climate justice — a justice for all people — a justice in which we will listen to the best available science and act to preserve life."

“Because of the climate crisis, and because of government actions which make this crisis worse, today we are not free to imagine our futures, to pursue a degree and career, or to think and make the choice of raising children,” Lalonde said. “Instead we must constantly come face to face with the reality of climate chaos.”

Donam Marfate of Extinction Rebellion said the protest brought out “people who are sick of the way things are.”

“People are finally realizing that they have the power to change something.”

Thunberg’s visit to Vancouver follows a rally in Alberta last week where she spoke to a crowd of 8,000 outside the Alberta Legislature in Edmonton.

Environmentalist David Suzuki told the crowd it’s time to focus on science in dealing with the climate crisis.

“You see a lot of coverage by reporters of business, of politics, of sports, of celebrities, and yet none of these areas is as important as science,” he said.

And he warned marchers they face formidable foes.

“Corporations increasingly dictate political priorities and policies as we saw, so graphically, with the SNC-Lavalin scandal —and SNC-Lavalin is a small company compared to Shell or BHP, or any fossil fuel company.”

Kelly White, one of the protesters, said while it was exciting to join Thunberg, he was there for the issues and to support Indigenous peoples.

“I’ve come to help stand up and fight for proper climate change action,” he said. “Hopefully with the more people coming and the more marches we will have, the more people will finally show up and start opening their eyes.”

Names: Grace (in red) and Rebecca (in green)
What are you doing on the ground? We’re live streaming the event for Greenpeace Canada.
When did you start getting involved in climate activism? Rebecca: “We were so inspired by Greta that we led a rally at the legislature in Victoria.”

Names: Lin, Tarah and Selina
Why are you here today? Selina: “Because someone’s gotta do something!”

Names: Franco and Samantha
What would you say to someone who says that marching is useless? Samantha: “Marching shows that people care about the future, that this problem demands recognition, and that it’s not OK. When we unite, we have a louder voice.”

Names: Lydia and Olina
How did you first get involved with climate activism? Olina: “I did a project in Grade 7 on how marching can make a difference. It’s been done. Laws have been changed. “

Names: Jaeda and Nina
This doesn’t look like your first rodeo. Jaeda: “In Grade 5, I protested against Monsanto. My parents have always instilled a sense of social justice in me. We live in a democracy, so use your voice; if you’ve got it, flaunt it.”

Names: Angel and Sophie
Looking at your sign, you must be vegans. Angel: “Yes. The University of Oxford made the most comprehensive study ever produced on farming and it’s impact on the environment, and it said that being vegan is the single biggest way to combat climate change individually. So that’s why everyone who can go vegan should be vegan — for the planet.”
Was it hard for you to go vegan? Both: “NO!” Angel: “It’s actually much harder for the animals to go through what they go through to end up on your plate.”