Three separate Alberta government investigations have slammed the controversial Alberta Energy Regulator for mismanagement, the misuse of millions of public dollars and conflict of interest.

The centre’s original mandate was to promote “best in class” regulatory practices. But it later set out to become an international training centre for regulators.

Trussler was blunt and scathing in her report, saying the scheme was intended to benefit CEO Jim Ellis and three other AER employees. Ellis retired in November.

“The primary motivation behind ICORE Energy Services (NFP) was to create future employment or remuneration for Mr. Ellis,” Trussler reported. “He thus furthered his private interests.”

The auditor general found that ICORE consumed at least $5.4 million of AER funding between 2017 and 2019. Approximately $3.1 million has been recovered.

The auditor general’s report noted that about two years ago, AER staff started to worry about “time spent on non-Alberta regulatory activities, efforts to commercialize AER intellectual property, and the belief that some of the efforts were in pursuit of personal benefits by a few individuals.”

It concluded the regulator acted outside of its mandate, spent public money inappropriately and failed to prevent conflict of interest.

It also noted the “tone at the top at AER did not support a strong control environment or compliance with policies.”

Revelations by a whistleblower last year sparked the investigations.

The Alberta Energy Regulator, an industry funded agency responsible for regulating oil and gas activity and coal mining in the province — including oil sands development and fracking — has frequently been criticized for failing to provide proper oversight.

The reports described it as out of control and unaccountable, despite supposed government oversight.

“I found a culture at the senior management level at the Alberta Energy Regulator that promoted a wrongful manipulation and omission of facts designed to mislead both the board and the government,” Trussler reported. “I found those actions to mislead both troubling and unacceptable.”

Shaun Fluker, an associate University of Calgary law professor who has written extensively about the regulator, found the reports alarming but not surprising.

“It is troubling, to say the least, that the CEO of Alberta’s Energy Regulator can scheme to this extent — and for so long — about using public time and money for private gain with very little apparent concern about any of this ever being revealed,” said Fluker in an email to The Tyee.

“This raises serious questions about the extent to which there is any real ministerial or cabinet oversight over the operations of the AER,” he added.

“The actions of senior executives at the AER revealed in these reports should certainly call into question the legitimacy of the AER as serving the public interest and the extent to which the AER deserves to be afforded deference by Alberta courts,” he said in the email.

The auditor general found that Ellis, who had led the regulator since 2013 and was paid $700,000 a year, also set up a for-profit version of ICORE “unbeknownst to the AER Board and AER staff.”

One of ICORE’s contracts included the delivery of certified training courses “on stakeholder engagement and regulation of unconventional energy development” at a Mexican university.

The Ethics Commissioner noted Ellis “had a conflict of interest in that he furthered his own interest and improperly furthered the private interest of three other employees.”

“ICORE-related activities at the AER provide a case study of how controls can be overridden, public money can be wasted, and harm can befall an organization when potential conflicts of interest are present, and weak processes exist,” Trussler reported. “The ICORE situation provides important lessons about how controls can break down when those charged with oversight fail to heed the warning signs and improperly assess systems and risks.”

Regan Boychuk, the founder of Reclaim Alberta, an advocacy group, said the investigations captured what has been wrong at the agency for years.

“Those characteristics personify the AER since its birth in 2013,” he said.

Reclaim Alberta has pressed the government and the AER to ensure aging oil and gas wells, facilities and pipelines are cleaned up. The potential costs now represent a $260-billion liability for taxpayers.

Boychuk said the AER and its predecessors let the liabilities grow for decades without forcing companies to set aside funds for a proper cleanup.

Ellis announced his resignation a day after the AER distanced itself from a presentation by its vice-president of closure and liability that revealed the $260-billion cost.

The AER had previously told Albertans that the largely unfunded liability was only $60 billion.

The presentation also acknowledged the AER operated “a flawed system” that only tried to collect money for well cleanups after companies were unprofitable or near bankruptcy.

The AER tried to downplay the revelations by describing the $260-billion liability as a “worst case scenario.”

The agency has only collected $219 million in security funds from industry for oil and gas well reclamation.

Critics and landowners have complained for years that the Alberta Energy Regulator is incompetent, conflicted and dysfunctional.

Since its creation in 2013, the AER has offered a “one-stop shop” for the development of oil, bitumen, fracked gas and coal mines. Its mandate is to “to ensure the safe, efficient, orderly, and environmentally responsible development of hydrocarbon resources over their entire life cycle.”

It also claims to protect land and water resources, but landowners describe the agency as a “captured regulator.” It is 100-per-cent funded by industry.

Volatile oil and gas prices, aging oil fields and high-cost fracking operations have resulted in cuts to industry funding for the agency. Its operating budget, which had been as high as $252 million, was cut to $154 million for this year. Staff cuts are also expected.

The AER was created in 2013 after its predecessor, the Energy and Utilities Board (EUB) was caught spying on landowners and broke privacy laws.

That scandal resulted in a reorganization of the agency that eliminated its old mandate to operate in the public interest. Ellis, a former deputy energy minister, oversaw the restructuring that gave the energy regulator power to allocate water to energy firms.

Despite the changes the AER has been the subject of persistent controversies since 2013.

After scores of residents complained about pollution and health problems from fracking operations near Cochrane, Alberta more than five years ago, the AER belatedly oversaw a 2016 study to find out if toxic and radioactive gases were escaping from fracked wells and what the health impacts might be.

Both Notley and Kenney Hiding from a $260-Billion Cleanup Problem

Rancher Howard Hawkwood told The Tyee this week the community had been promised a fast response in 2016. 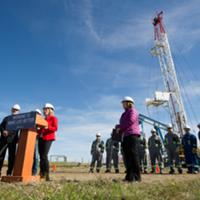 “Our community group were promised results of this study, to be provided in a timely manner and to include raw data from the study,” he said.

Instead, Hawkwood said, the AER has let three years pass and the study still hasn’t been released.

“We have been very disappointed with the AER and its response to landowners regarding fracking and its effects,” said Hawkwood. “We were not surprised to learn of the mismanagement of funds.”

Two years ago, the AER’s former chief environmental scientist accused the regulator of failing to deliver on its mandate to protect health and safety by failing to publish damning reports on pipeline spills and abandoned and leaking wells.

And in 2007, Jessica Ernst, an oil patch environmental consultant, sued the Alberta government, Encana and the energy regulator for negligence over contamination of local aquifers near her Rosebud home. She argued it was caused by the hydraulic fracturing of shallow gas wells in 2004.

The case eventually went to the Supreme Court of Canada, which in a 5-4 decision ruled provincial legislation granted the regulator immunity from citizens’ lawsuits.

The Alberta Energy Regulator issued a news release on the ruling that was criticized by lawyers.

“The AER Public Statement is inaccurate and misleading, and is not the sort of action we would expect a quasi-judicial tribunal to consider appropriate,” noted Fluker and another lawyer in a popular legal blog.

The AER isn’t the only energy regulator that has lost public trust in western Canada.

A recent report on fracking in British Columbia reported it couldn’t tell if the industry-funded B.C. Oil and Gas Commission was a competent regulator because “insufficient evidence was provided to the panel to assess the degree of compliance and enforcement of regulations.”