Environmentalists say the provincial government’s commitment to protect 54 more old-growth trees is a good first step, but its effect will likely be more symbolic than ecological.

B.C. Forests Minister Doug Donaldson said at a press conference Wednesday that the designated trees would be protected by placing a one-hectare buffer zone around each of them.

He described the action as a “first step in a broader old-growth plan” that also includes an independent, two-person panel to “engage with First Nations, industry, stakeholders and communities on old-growth management” starting this fall.

The panel will provide recommendations to the government in spring 2020.

“This is good, but it’s not nearly enough, and it’s not happening anywhere close to the pace we need change for endangered old-growth forests,” said Jens Wieting, senior forest and climate campaigner with the Sierra Club BC. “We are in the midst of extinction and climate crisis, and this step is more symbolic than anything else.”

Old-growth forests, he said, help mitigate the effects of climate change — particularly when it comes to forest fires. Wieting said he’s worried about any delay in implementing a long-term strategy for such forests.

Forest ecologist Andy MacKinnon said the announcement made him hopeful that the government is “listening to what people have to say about old-growth forests in B.C.,” but he also finds the current lack of a long-term plan troubling.

“What they’re announcing is protection for some very large trees,” he said. “It’s not any kind of plan for old-growth forests.”

Wieting and MacKinnon are doubtful that protecting 54 trees, even with a one-hectare buffer zone, will have significant effect on their ecosystems.

“It’s a very modest step,” said Wieting. “The buffer zones would add up to 54 hectares. On Vancouver Island alone, we are destroying about 10,000 hectares of old growth every year.”

MacKinnon compares the total area protected to a little more than 13 per cent of Stanley Park, which comprises around 400 hectares.

Ancient Forest Alliance campaigner Andrea Inness is optimistic that the buffer zones will be a good first step to avoiding more “Big, Lonely Doug” scenarios on the coast, referencing Canada’s second-largest Douglas fir tree that stands alone amid a clearcut. It is now one of the 54 protected trees.

But Innes also said a more comprehensive strategy based on ecosystem science is needed.

Currently, only living trees are eligible for provincial protection, and advocates want protection for dead trees, too.

Dead trees continue to store carbon for decades, Wieting said. “It takes that long for a truly old tree to completely decompose and much of the carbon will then remain stored in the soil, slowly absorbed by other growing trees.”

Inness, Wieting and MacKinnon also said the size threshold is a concern.

“It sounds like that would capture a lot, but it actually doesn’t. The very largest trees on the Big Tree Registry are exceptional giants,” said Inness. “So to protect only those that are 50 per cent as wide only captures exceptionally rare and large trees.”

The BC Big Tree Registry is a record of large tree specimens native to B.C. housed at the University of British Columbia. All 54 of the newly protected trees are from the registry.

MacKinnon, who was the committee chair of the registry from the mid-1990s until last year, said that any old-growth forest strategy needs to extend far beyond trees on the registry.

But Inness, Wieting, and MacKinnon said those numbers are misleading.

“Not only does that [55 per cent] include low productivity forests in subalpine areas and bogs — forests that have very little to no commercial value and aren’t endangered — it excludes private lands which have largely been cut over,” said Inness.

The ministry has previously said that it has “very limited jurisdiction over private land harvesting” in response as to why it’s not included.

Inness also said that the 55 per cent of protected old growth only describes the remaining forests, not the original amount before industrial logging began.

“They’re just talking about a fraction protected of the fraction remaining,” she said. “By that logic, the more you log outside of the protected areas, the more is protected until finally, the government can say ‘100 percent of old growth on the coast is protected’ because everything else is logged.”

Wieting and MacKinnon said they have been unable to map 500,000 hectares of protected old growth on Vancouver Island. 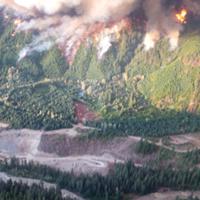 “It’s been really frustrating to see the different numbers that have been thrown about,” said MacKinnon. “When an environmental NGO says there’s only this amount [of old growth] left on Vancouver Island, the government and industry together will always respond that there’s this amount protected on the coast of British Columbia.”

MacKinnon said the coast of B.C. has very different conservation statuses depending on the location, with 75 per cent of the north and central coast already protected under the Great Bear Rainforest agreement and 52 per cent of Haida Gwaii in protected areas.

Lumping the amount of protected old growth on Vancouver Island with these regions distorts the image of how much is at risk from logging, he said.

“If you’re wondering who to believe about Vancouver Island, I would encourage people to either look at satellite imagery, air photos,” said MacKinnon. “Or simply drive the back roads and decide for yourself.”

The province’s office of Land Use Planning was reached out to for data on Vancouver Island’s protected old growth but did not respond.