It rains in Zeballos. A lot. The village, perched at the end of a long inlet on the west coast of Vancouver Island, is surrounded by mountains and rainforest.

But despite the region’s average annual precipitation of 163 inches — more than three times that of Vancouver — the community of about 100 people was threatened when lightning sparked a wildfire last August. About 168 hectares burned over two weeks, as flames loomed over houses, and burning trees and debris tumbled down the slopes toward the village.

Within a month, evacuation orders were placed on 27 properties. Ten months later, the order still hadn’t been fully lifted because of fears the burned slopes might slide onto the community.

The fact that some of the wettest forests in North America are now considered candidates for wildfires signals the severe shifts being caused by climate change. It means that old growth trees, critical for forest resiliency and traditionally quite fire resistant, are increasingly under threat.

“We’re seeing impacts in places in coastal B.C. that are very unique, [which] speaks to the multi-year drought we’ve been experiencing,” said Lori Daniels, a professor of forestry and conservation science at the University of British Columbia.

Last week the BC Wildfire Service released a seasonal report predicting the B.C. coast — along with Vancouver Island — will experience “above normal fire conditions” this summer.

BC Wildfire Service fire information officer Erika Berg said although much of the province has received recent rains, things are expected to warm up.

“In just a short time of high temperatures and low precipitation, fuels can dry out rather quickly,” said Berg. “Those conditions are risky when it comes to potential firestorms.”

Berg also pointed to last year, when the fire season intensified later in the summer after more than 70,000 lightning strikes occurred between July 31 and Aug. 1.

“We’re not in the clear yet, even though these wet conditions have been favourable,” she said. “They can dry pretty quickly.”

Berg said that the BC Wildfire Service looks at conditions experienced during the prior fall and winter months in making its forecasts.

“The precipitation levels experienced in the coastal region were below average,” she said. “That carries over to affect the snowpack and the overall soil moisture, vegetation growth, and fine fuel dryness.”

Vancouver Island in particular is reported to still be suffering from “very dry” conditions despite rain in recent weeks.

Jens Wieting, senior forest and climate campaigner with Sierra Club BC, said he was driving between Sooke and Port Renfrew on southern Vancouver Island last June when he saw a fire burning in an area that had been clearcut.

“It was very clear just from looking at the extremely dry clearcuts how big the risk for a big forest fire is during these increasingly hot summers that we now have.”

Wieting said the fire risks have been increased by the loss of coastal old-growth forests.

Old-growth forests are resistant to burning. Older, larger trees absorb water, retain moisture and regulate the climate within the forest, especially during a hot, dry summer, he said.

The dead fallen trees and branches on the forest floor are shaded, damp and less likely to fuel a fire.

Ira Sutherland, a PhD student in forestry at UBC studying the structure and function of B.C.’s forests, said the wet, temperate climate in coastal B.C. has historically allowed old-growth forests to flourish.

“When you have all that rain, you have an absence of fire,” said Sutherland. “The fire return interval — how often a fire does happen — is usually about 150 to 350 years on the coast. In some areas where it’s really wet, you don’t have fires for 4,000 years.”

Recent research has also shown that old-growth trees experience high rates of mutations, leading to genetic diversity, which may play a role in their ability to adapt to local climates and explain why they have survived for centuries.

Now even the oldest, strongest trees are threatened by the high-intensity wildfires the province has seen in recent years.

Daniels points to the 2015 fire season, when the Coastal Fire Centre saw the biggest and most active fires.

“In Elaho Valley, it was over 10,000 hectares,” said Daniels. “It burned and killed the Elaho Giants — the big Douglas fir trees that are hundreds if not close to a thousand years old.”

The Giants survived for so long because of their thick bark and durability in low to moderate forest fires. But the 2015 fire in Upper Elaho Valley, about 100 kilometres northwest of Squamish, was too severe for the trees to survive.

“It’s getting worse,” he said. “As the climate is shifting, these factors are becoming more extreme. We need to fully accept the reality of climate change. More trees are suffering.”

Daniels also highlights the recent fires on the Sunshine Coast and the Sea to Sky highway as blazes not typically seen along the coast.

Much of the forests in coastal B.C. have been logged over the last century. Now younger second-growth forests dominate the landscape, and they are not nearly as fire resistant.

“[They] have very different forest structures,” said Daniels. “The tree sizes and woody debris on the floor is not large, and therefore absorbs and releases water a lot more rapidly. It takes a shorter period of time to dry out the logs in a second-growth forest.”

Sutherland said logging has been particularly extensive around Victoria, Nanaimo, and the Cowichan and Comox Valleys — all part of the coastal Douglas fir biogeoclimatic zone.

“It’s a major area of conservation concern,” he said. “Only one per cent of old growth remains there.”

A little more than 14 per cent of the province’s public forested land is protected in parks or reserves, but that does not mean old-growth forests are protected, Sutherland said.

“It’s mostly subalpine forests, rock, glacier — there’s not a lot of old-growth there.”

The north and central coast of B.C. falls under the Great Bear Rainforest agreement, which has been criticized for not fully protecting old growth. The southwest coast remains largely unprotected from industrial logging.

“There’s no doubt the amount of old-growth forest is going to continue to be reduced by logging,” said Sutherland. 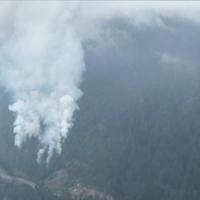 Wieting said coastal old-growth logging has focused on areas of “good productivity” — the ones with the biggest trees.

Less than 10 per cent of old-growth forests remain, he said.

“It’s extremely important to protect forests that are more resilient,” Wieting said. “We know that we need them for water, air, protecting communities from drought, flooding, landslides. We need them for survival.”

Old-growth forests, Wieting said, are one of our best allies against the intensifying fire seasons and climate change as a whole.

“I’m sure that, that day when I stood on the highway looking at the fire, at the horizon, at the helicopters circling above it, that fire would not have happened if the forest was intact.”