It’s a sunny June afternoon in Coquitlam, B.C. About a dozen RCMP officers are gathered, trying to decide whether to arrest homelessness protesters setting up a tent city.

Officers look up, and images of the two-dozen protesters are reflected in their sunglasses.

The protest group, some from the Alliance Against Displacement, have completed a march and stretched bright orange plastic fencing around a site where they plan to establish the We Exist Tent City.

While the RCMP officers deliberate, two lawyers from the Pivot Legal Society approach them.

The tent city is legal, they maintain. The city hasn’t provided adequate shelter for the homeless. And Section 7 of the Charter of Rights and Freedoms recognizes that “everyone has the right to life, liberty and security of the person and the right not to be deprived thereof except in accordance with the principles of fundamental justice.”

Which, the courts have ruled, includes the right to sleep in parks or public space if no other option, like a shelter, is available.

This is the foundation of the Section 7 strategy that Pivot Legal Society is using to protect homeless residents in the Tri-Cities of the Lower Mainland from what many consider a hostile attitude toward people without homes.

It has worked before, most notably at the Anita Place Tent City in Maple Ridge. And the homeless people gathered outside the orange fencing are hoping it will protect the We Exist Tent City.

Two cases established the idea that Section 7 of the charter protects the rights of homeless people.

When homeless people in Maple Ridge set up the Anita Place Tent City on city land in May 2017, the rulings initially protected them.

But the city eventually argued that the camp posed a fire safety hazard, and in March, the B.C. Supreme Court ruled that Maple Ridge could enter the camp to inspect it for safety and require people living there to register and declare if they were seeking housing.

Pivot Legal Society says this effectively shut down the camp, because the city excluded vital support systems like family or support workers from entering the camp.

The provincial government has since announced housing would be provided to residents.

It was closed by the RCMP within hours.

Pivot lawyer Anna Cooper said the closure was unprecedented. “There isn’t a single other instance across Canada where police actors have moved in to shut down the site [as it’s being opened],” she said in a video posted to Alliance Against Displacement’s Twitter page.

“Shutting down sites like this is almost a guarantee that people will die,” she continues. “In the event somebody dies because the site has been closed, the blood is on their [the RCMP’s] hands.”

When RCMP officers eventually moved past the fencing at We Exist Tent City, organizers decided they would move on peacefully, ending the tent city hours after it had been founded.

Margot Young, a professor at UBC’s Allard School of Law, says the strategy’s effectiveness is also limited by its inability to compel government to provide support for homeless residents.

“There’s been no articulation of how we might use Section 7 to force the state to do something positive, like build more shelter beds,” she told The Tyee.

There is no obligation for cities to take positive action like providing low-barrier housing. They are only directed not to take certain actions, like prohibiting overnight camping.

The RCMP told protesters at the We Exist Tent City that their job is to enforce trespassing laws, not consider constitutional issues. 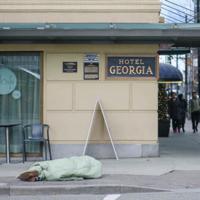 “We appreciate the Section 7 argument,” says John Graham, an RCMP officer tasked with speaking to the media after the We Exist Tent City was closed. “But that should be resolved by a judge and not by RCMP.”

“Pivot’s strategy as an organization in general is to look at strategic litigation,” says Cooper. “There’s potential to advance the law in a way that protects people on a broader basis.”

“The lack of legal aid, combined with the poverty of the client means that you simply do not have a lot of these cases being brought forward.”

“People need to have a place where they feel safe,” says Niki Panteluk, a protester, as she sat and waited to learn the fate of the tent city. “I already felt vulnerable and now they’re going to make me leave the only place that makes me feel safe.”