“If this can happen in Pakistan, it can happen anywhere,” said Aisha Ijaz, program manager at Aahung, an NGO dedicated to bringing sexual and reproductive health information and resources to people in Pakistan.

Speaking on a panel at the Women Deliver 2019 conference in Vancouver last week, Ijaz was one of dozens of presenters at the conference discussing the issues faced by advocates trying to get comprehensive sex and reproductive health education into their respective countries’ schools.

Teenagers in Canada have access to some of the best sexual health programs in the world.

But there are gaps in the information provided to Canadian youth, and considerable effort has been made to widen those gaps even further in places like Ontario, where the government tried — and failed — to roll back sex ed last year to the 1998 version; and Alberta, where the new United Conservative Party government has promised to force schools to inform parents when their child joins a gay-straight alliance if the school fears “harm” could happen to the child if their parents don’t know.

Even here in British Columbia, where adults are protesting schools for telling students that transgender people exist, LGBTQ2S+ youth advocates say they are not seeing their particular needs addressed in the province’s sexual health education curriculum.

But in some countries, comprehensive sexual health education isn’t only absent from schools. It’s not even allowed in the building.

“You can’t bring any [sexual reproduction and health rights] materials into schools, within a 100-metre radius,” said Tikondwe Chimkowola, gender officer in the Malawi government’s Department of Gender Affairs. “Basically, you can’t go to a school and talk about sexual reproductive health at all.”

Chimkowola advocates for peer-to-peer comprehensive sexual health education, where young people are trained in delivering sex education and dispatched to talk to their friends about it.

It’s not just happening in Malawi.

“Change for young people needs to happen with young people. Young people are much better leaders than us, as development workers and practitioners, to push the agenda and to fulfill their rights,” said Renata Tallarico, regional co-ordinator at the United Nations Population Fund’s East and Southern Africa Office.

Tallarico told the story of “Thandie” — not her real name — a young woman living in a southern African country who struggled to find sexual health information when she got her first boyfriend at age 16. She went to all the right places — her teacher and the local health clinic — but she and her questions were dismissed because it is illegal in her country to share sexual health info with anyone under 18.

Thandie became pregnant and her boyfriend went to jail for rape — despite their sexual activity being consensual — and his family promises he will marry her when he gets out of prison. Thandie isn’t allowed to go back to school, but through a community worker she is connected with the UNFPA’s Safeguard Young People program.

“Through the program she was able to join a safe space for girls where she got the knowledge about how, where and when to seek information about sexual and reproductive health and skills to make informed decisions,” Tallarico said.

“And because of that she’s now leading a group of girls through the Scouts association in the country... to inform other girls about their sexuality and how to prevent unintended pregnancies in her district. And most importantly, she got the support she needed for herself and her son [so she could] go back to school.”

Chimkowola, who is 22, had to fight for her voice to be heard and taken seriously in the sexual health education debate in Malawi. It’s a story youth worldwide are used to hearing, but it’s not a reason to give up, she said.

“We talk about a women’s movement, but then we’re always leaving young girls behind,” she said, citing lack of experience and formal education as reasons why they’re dismissed.

As controversial and counterintuitive as it may seem to the promotion of sexual health, some comprehensive sexual and reproductive health advocates say the best way to get information into schools is to take “sex” out of the title. It’s worked in Kenya, Ethiopia, Pakistan, Namibia, and even here in B.C.

“There was a lot of backlash when it came to comprehensive sexuality education from the religious [institutions], from the parents, from the communities,” said Jane Gichure Otai, adolescent health adviser at Jhpiego, a global maternal and child health NGO affiliated with Johns Hopkins University in the U.S., speaking about the backlash in Kenya to the phrase “comprehensive sexuality.”

So the Kenyan government changed the title of the program to Family Life Education, added more overall health information without removing comprehensive sexual and reproductive health information, and suddenly parents and the community were on board.

Even in B.C., there was never a class called “sex ed.” Instead, sexual and reproductive health education is part of what’s called Physical and Health Education.

“It used to be included in a subject area that no longer exists. It was called either Personal Planning or Health and Career Education,” said Glen Hansman, the outgoing president of the BC Teachers’ Federation.

“So all of the health-related stuff — not just sex ed, mental health, bike safety, food — that’s been all merged with what was formerly Physical Education in B.C.”

Work with government — and talk to the opposition

Often the conservative values espoused by some governments are spurred on thanks to interference from socially conservative western organizations seeking to promote their own agendas, said Monica Geingos, the first lady of Namibia.

“We need to convince those who are distracted by terminology, distracted by things that they fear, and really absorbing this propaganda, firstly that’s coming from conservative cultures in the West that’s confusing our religious communities,” she said.

But even those opposed to comprehensive sexual health education on religious grounds may share a common ground with advocates for sexual health education, and it’s important that advocates try to find it, said Ijaz, who with her colleagues at Aahung in Pakistan “spent years and years” cultivating relationships with potential comprehensive sex-ed allies in the country’s education ministry.

“There’s this sense in Pakistan, and I’m sure in other countries as well, that [sex ed is] a western agenda. So we really spent a lot of time giving them statistics from Pakistan, contextualizing it,” she said, including stats on sexual assault and child marriage in the country.

In Jamaica, Anna-Kay Magnus Watson co-ordinated the development of the comprehensive sexual health education, Health and Family Life Education, in the education ministry. But just as it was about to launch in 2012, the government withdrew the curriculum because it included discussions of LGBTQ2S+ people.

But instead of rejecting the curriculum, the education minister challenged Magnus Watson and her team to adapt it.

“He challenged us to make the curriculum better and one that meets the needs of everybody: not just our students but teachers, parents. A curriculum that everybody accepts,” she said.

Magnus Watson and her team met with all stakeholders involved, including those who opposed the curriculum, to talk about what was actually being taught in Health and Family Life and why.

“It took months upon months, but it allowed them to get an understanding of what the curriculum was about, that it’s a life-skills based curriculum,” she said. Homosexuality was still included in the curriculum, but the minister promised in local media an emphasis on heterosexual marriages.

“We did it together, and then we were able to put the curriculum back in schools in 2013. That approach really worked for us, so much so that in 2016 we decided we needed to update the curriculum again to make it more relevant to our students, so we pulled everybody back to the table again and we took the same approach.”

While dancing around the word “sex” or even emphasizing heterosexuality above homosexual relationships in sex ed globally can seem like two steps forward, one step back, getting sexual and reproductive health information to young people is the aim, Ijaz said.

Where does this leave BC?

Compared to countries where sex education is banned from schools and opposed on religious grounds, opposition to sexual and reproductive health information in Canada today is very small, says the BCTF’s Hansman.

“I think in B.C. probably the bigger demographic that would have to be worked with is the various culture groups in Richmond and Surrey,” said Hansman, pointing to language barriers and the lack of exposure to sex ed in schools for some adult immigrants.

“Not that they’re resistant, necessarily, to what their kids are learning. But to just help them understand and find common ground.” 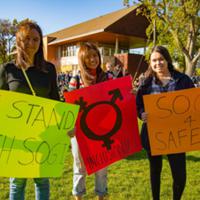 Not that there can’t be improvements to sex-ed in the province, Hansman added.

Currently the language around the sexual reproductive health curriculum is vague enough to make room for teachers discussing sexuality and safe sex practices for students with disabilities and lesbian, gay, bisexual, trans, questioning, two-spirited and other students, but it isn’t mandatory to include them.

Moving sex-ed to the gym teachers’ domain didn’t come with new money for professional development, training guides, or lesson plans for teachers used to focusing on other aspects of physical health. So there’s a dearth of information for teachers in some places in B.C., Hansman said, adding the government is working to improve that.

“Because when I go to Qmunity, or Options for Sexual Health, or the YouthCO [peer education] office, there’s lots of good materials that have been developed from the Ministry of Health. But they’re more aimed at 20-somethings and would need to be adapted for a younger audience,” he said.

“Some of that work is finally underway and it’s long overdue.”