A British Columbia legislature committee will ask an independent reviewer to consider allegations from Speaker Darryl Plecas of misconduct by two suspended top officials, as well as their responses, and then recommend what should happen next.

“We have outlined a path forward that will allow us to deal with the recommendations in the Speaker’s report,” said NDP house leader Mike Farnworth, flanked in a media scrum by BC Liberal house leader Mary Polak and Green house leader Sonia Furstenau.

In November, members of the legislative assembly voted unanimously to suspend with pay Clerk Craig James, the top staff person in the $80-million-a-year legislature, and Gary Lenz, who as sergeant-at-arms is the head of security.

The RCMP confirmed at the time that it was investigating. Two special prosecutors were appointed to oversee the investigation and recommend whether charges would be appropriate.

MLAs will also have to decide whether James and Lenz can return to work, should remain on paid leave, or be fired.

James and Lenz have rejected nearly every allegation Plecas made in his report, and said they believe they’ve done nothing wrong and want to return to work.

Response to the responses

Plecas, in turn, has written a 32-page response to James and Lenz’s responses to his initial report. That response was released Thursday afternoon.

“At this stage, the House Leaders need to decide whether confidence in these two officers has been undermined to the point that, regardless of the outcome of the further processes, audits and investigations, Mr. James and Mr. Lenz cannot realistically return to their positions as the senior executives of the Legislative Assembly,” Plecas wrote.

“The responses from Mr. James and Mr. Lenz attempt to create a contest of evidence between me and them, but that is not what this is about,” he said, saying his observations were supported by dozens of witnesses who worked with James and Lenz.

“The responses provided by the suspended officers can be assessed without having to decide whether to believe them or me,” he said. “Considering Mr. James’ and Mr. Lenz’s own statements in light of the objective documents, and using basic common sense, should provide a sufficient basis on which to make a determination of whether the Legislative Assembly and the public can ever have full confidence in these officers’ ability to lead this institution in the future.”

James and Lenz are highly paid senior officers and their conduct needs to be scrupulous, Plecas said. “The standard we expect of senior executives can’t be that their actions be ‘plausibly defensible’ or ‘...but somebody else okayed it.’ It has to be that they do what’s right.”

“I think all three of us, all three parties around that table, take this issue very seriously,” he said, adding that they had to come together on the issue. “We take the institution very seriously and we worked together to come up with a way forward, along with the Speaker, and we think that we’ve got the right approach and the right path.”

Plecas, whose credibility was at times publicly questioned in media stories and by opposition MLAs including BC Liberal leader Andrew Wilkinson, said he was pleased with the committee’s decision.

“I think we have a path forward,” he said. “I’m extremely happy of the decision to have a jurist do an independent review. I’m assuming that’s going to be a rather quick path, and we’ll have to see where it all lands.”

He said he expected the process would take a matter of weeks. 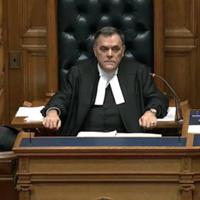 The committee noted Plecas would be uninvolved in the review or further discussion of the matter, and Plecas said it was time for him to step back.

Arguably, he said, the facts are independent as well.

“All of that leaves me very confident where this will end,” he said. “I don’t think there’s any debate or should be any questions about my thinking on this. I said very early on of course that I believe the two people who are under investigation shouldn’t be here.”

He added, “That person who does the review will come to a conclusion which is in the best interest of British Columbians and British Columbia taxpayers. I’m very confident about that.”

The committee also voted to rescind a previous motion to appoint an independent auditor, and to instead support B.C. Auditor General Carol Bellringer’s continued involvement.