The $6.2-billion Coastal GasLink pipeline may face a bigger threat than the opposition of Wet’suwet’en hereditary chiefs and protests across Canada.

Last fall the board agreed to consider Sawyer’s challenge.

In April it will hear final arguments on the question of whether the pipeline falls under provincial jurisdiction, or if it is subject to NEB rules and assessments.

That would bring delays and “put real, tangible benefits to people in B.C., including First Nations, at risk,” said pipeline owner TransCanada Corp., rebranded this week as TC Energy.

The project would move fracked methane from northeastern B.C. and northwestern Alberta to the $40-billion LNG Canada export terminal in Kitimat.

Sawyer, a 61-year-old environmental consultant, said the prospect of a NEB regulatory review should have been considered by the B.C. Supreme Court before it issued an injunction that led to RCMP action against two Indigenous checkpoints this week.

“I wonder if TransCanada disclosed information to the judge about this jurisdictional challenge before it asked him to grant the injunction against the blockade,” he said. “The fact is that the RCMP enforced the injunction in an over-the-top manner for a pipeline that may be deemed illegal and whose permits could be quashed.”

The threat to the project has alarmed many pro-LNG northern mayors, politicians and more than a dozen elected First Nations councils and has put Sawyer and his legal case in the centre of a political tornado.

Ellis Ross, the BC Liberal MLA for Skeena, and other LNG advocates have characterized Sawyer’s NEB application as a “spurious argument” and asked Premier John Horgan to intervene in the case.

TransCanada has accused Sawyer of trying to use the application to kill the pipeline and reduce natural gas production.

“The Application is a collateral attack on validly-issued provincial permits, and as such is an abuse of process,” said a company letter to the board last August.

Fourteen mayors wrote Sawyer an open letter in September saying they recognized his right to file a “jurisdictional challenge” but found it “disappointing.”

The mayors argued that the project would increase tax revenues as well as “produce the least carbon intensive LNG in the world.”

Sawyer and his motion have generated so much controversy, including death threats, that when he reached out to several B.C. politicians to explain his case they didn’t return his calls, he said.

The shunning does not faze Sawyer.

The no-nonsense consultant, who operated a modular home business in Smithers for several years, said there are laws about pipeline jurisdiction and they should be obeyed.

“When the government breaks the law, it falls on citizens to hold their feet to the fire and make sure they do comply with the law,” he told The Tyee.

And that’s partly what the Alberta-born Sawyer has been doing for the last 22 years.

When not working on environmental assessment for pipelines owned by Enbridge, TransCanada and even the Mackenzie Valley Pipeline, the consultant has defended the rights of landowners and First Nations before energy regulators on issues such as sour gas, a potent pollutant.

But by asking a simple constitutional question about jurisdiction he now finds himself in the middle of political storm about a multi-billion-dollar LNG development that will industrialize much of northeastern B.C. with pipelines, access roads and fracked shale gas wells that generate earthquakes.

And he’s indirectly raising questions about the over-budget Site C dam, which would supply electricity to the LNG and fracking operations.

Sawyer has been there before, but this time the economic stakes are higher — and so is the animosity.

Having worked on environmental pipeline assessments for years, he knew jurisdiction had provoked numerous National Energy Board judicial and regulatory decisions.

In the 1990s, for example, the board grew increasingly concerned about “sausage links,” or short pipelines that companies build to connect to provincial pipelines. The approach helps companies avoid federal regulatory reviews that typically accompany interprovincial lines.

Twenty years ago, the Supreme Court of Canada got involved in the question of jurisdiction in a case involving West Coast Energy, which collected and piped gas in northern B.C.

In that case, the NEB dismissed an expansion application from West Coast Energy on the grounds that its operations didn’t fall under federal jurisdiction.

West Coast Energy challenged that decision and in 1998, the court ruled that federal regulation was required if the same owner operated “the gathering pipelines, processing plants and mainline transmission pipeline in common as a single enterprise.”

In 2014 Sawyer decided to test that ruling on the proposed Prince Rupert proposal — a line fully owned by TransCanada, whose pipelines in Alberta are all federally regulated.

During former premier Christy Clark’s big LNG push, TransCanada wanted to gather methane from the fracked shale gas fields of northeastern B.C. and transport it to Petronas’s proposed $11-billion Pacific Northwest LNG plant on Lelu Island. (It, too, was the subject of Indigenous protests.)

Sawyer argued before the board that the Prince Rupert line would connect to federally connected lines to draw fracked methane from Alberta and should be federally regulated.

But the board told Sawyer, as he puts it, “to piss off.”

He then took his case to the Federal Court of Appeal, which found that the board had failed to uphold the law and “did not apply the correct constitutional lens to the evidence before it.”

Citing the Supreme Court decision, the court added that the board “failed to consider that an enterprise can form part of federal undertaking and still be wholly situated within a province.”

The court concluded “there was considerable evidence before the Board, none of which was in dispute, that the purpose of the PRGT was to move gas from the Western Canadian Sedimentary Basin for export to international markets. The Board looked at where the pipeline was, and did not ask what it did.”

After that decision Petronas, a state-owned Malaysian company, pulled the plug on its LNG plant on Lelu Island for economic reasons.

TransCanada did not appeal the court decision but recently asked the B.C. government to extend PRGT’s provincial environmental assessment certificate for another five years.

Given the Federal Court of Appeal ruling, Sawyer then took aim at the Coastal GasLink line in early 2018.

It, too, had already been assessed and approved as a provincially regulated pipeline.

Sawyer argued that it should be federally regulated because it will connect to TransCanada’s NOVA Gas Transmission Line System. Together the two lines will comprise a single integrated undertaking, pulling methane from across the west to be converted to LNG for Asian markets.

In addition he noted that Coastal GasLink would be run by TransCanada’s operations control centre and would follow TransCanada’s emergency management systems and public awareness programs.

Sawyer filed his application just as LNG Canada, the largest capital project ever proposed in the country, was about to announce its final investment decision last year.

“That’s when the shit hit the fan,” said Sawyer.

In August TransCanada wrote a letter to the board asking that it reject any application for jurisdictional review on the grounds that Sawyer was “a vexatious” individual.

“The facts demonstrate that Mr. Sawyer’s true purpose is to engage in strategic litigation for an ulterior purpose,” including environmental impacts of upstream development, charged the TransCanada letter.

The letter added that Sawyer “chose not to participate in the provincial regulatory processes for the Project, and chose not to raise his concerns over the last four years, when he knew he could. Instead, he has brought this Application on the eve of a Final Investment Decision for the LNG Canada Project in an obvious attempt to frustrate that project and its associated upstream development.”

Sawyer told The Tyee that he was unaware of the original project applications and, given the limitations of the B.C. Environmental Assessment Act, would have chosen not to participate anyway.

He said the timing of his application was based on Federal Court of Appeal’s 2017 ruling.

After reviewing that decision and talking to his lawyer, William Andrews, Sawyer took eight months to complete his research and file an application for jurisdictional review with the NEB.

“The timing of that filing coincident with the LNG Canada final investment decision was purely a coincidence,” he says, “and more related to me being a one-man, unfunded operation and the time required to prepare and file my application.”

Sawyer said there is no basis to TransCanada’s claim that the timing of the application was an “obvious attempt to frustrate that project and its associated upstream development.”

Since the NEB agreed to hear the case, Sawyer said he has received several death threats.

“Hope you have your fire insurance up to date,” said one threatening caller while another said, “Look out. We’re coming to get you,” Sawyer told the Terrance Standard. 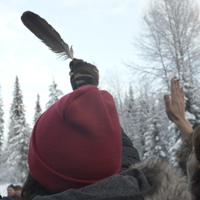 He said the RCMP described the threats as “implicit” and not “explicit,” with not enough information to act on.

The NEB will hear final arguments on the case in April.

If the board rules the pipeline does fall under federal jurisdiction, “then the RCMP will have enforced an injunction for a pipeline that is illegal,” concludes Sawyer.

Wet’suwet’en hereditary leadership applied for intervenor status in the case, but the board denied them standing.

“I would say [it’s] at least an arguable case,” said Banks, adding it’s hard to assess its strength “until we see all the details.”

“We do know that the [board] has been trying to avoid dealing with the issue, but I think that the Federal Court of Appeal’s earlier decision means that they will have to look into it and then we will have the record that we need to assess the degree of integration.”

Coastal GasLink would supply fracked methane to the $40-billion LNG Canada, the largest single capital project in the nation’s history.

In 2012 TransCanada described Coastal GasLink as a pipeline that will connect natural gas producing areas in northeast B.C. with the proposed LNG Canada export facility at Kitimat.

In addition to allowing access for new natural gas markets, the project would “connect with the existing Nova Gas Transmission Line System at Groundbirch, which will provide access to other western Canadian natural gas supply.”

[Author’s disclosure: In the 1990s, Mike Sawyer and Andrew Nikiforuk shared a business office together in Calgary.]